Background:
Age: 38. Zac Purton ended Douglas Whyte's 13-season dominance with his first Hong Kong jockeys' championship in 2013/14 (112 wins) and in earning his second title in 2017/18 he halted Joao Moreira's title streak at three. During his first championship season, the Australian ace raced to what was then the fastest 50 in Hong Kong history and became the second rider, after Whyte, to notch 100 wins in a season. Purton lost his title when second to Moreira in 2014/15 with 95 wins, a position he filled for the next two terms, including when notching his second century in 2016/17. His second championship was a remarkable effort as he chased down Moreira to take the lead for the first time that term on June 10, 2018. Five weeks later, at season's end, he had outpointed Moreira 136-134 with a win strike rate of 21% to the Brazilian's 20%. Purton tallied a career-high 168 wins in 2018/19, a season in which he also became the second jockey in Hong Kong history to ride 1000 winners, and in which he set a new single season prizemoney record of HK$234,989,515. The Australian ace took a third consecutive championship in 2019/20 with 147 wins and three Group 1's, his triumph aboard Exultant in the 2020 QEII Cup meant he became the only rider in history to have won every Group 1 race on the Hong Kong calendar. Purton's championship winning streak was halted at three in 2020/21 as great rival Joao Moreira reclaimed the title. Still, Purton enjoyed a highly successful campaign with 125 wins, including his second G1 Hong Kong Cup triumph, this time aboard Normcore for Japan to make him the most successful jockey in HKIR history with nine wins. He also sealed a second LONGINES International Jockeys' Championship title, beating off an all-star cast of rivals at Happy Valley. Purton started his career in Brisbane and was an apprentice sensation, winning the premiership there in 2003. He then moved on to Sydney where he was twice second in the premiership. Purton moved to Hong Kong in September, 2007 and he boasts a famous Royal Ascot win for Hong Kong aboard the Danny Shum-trained Little Bridge in the 2012 King's Stand Stakes. 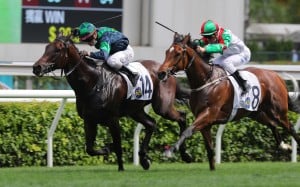