Sight Seeing was ridden along from an awkward gate to settle one off in second, cornered three deep, worked to the front 150m out and kept on gamely for a maiden win at his third start. Favourite Super Talent saved ground in midfield, popped one off upon straightening and got up 150m out for second. He's crying out for a longer trip. Rank outsider Bear-Pop settled behind midfield along the paint, pulled off heels three deep at the 200m and ran on steadily in a much-improved second-up performance. Call Me Achiever jumped swiftly to lead from gate eight, cornered a neck on top and grudgingly gave way when headed. He's better at the Valley. Jolly Spring swung the final bend with two wider out after a one-off run in midfield and only plodded away under pressure. Mac Row made a decent bid after cornering five deep with only one behind him. Sledge Hammer made his run third from the rear, swung the final bend with one wider out and made some ground without menacing. Best-backed late, Gideon travelled outside Bear-Pop in the run, angled into the clear with three outside him at the 300m and plugged on one-paced over the final 150m.

CHIN CHUN was withdrawn on 31.10.14 by order of the Stewards acting on veterinary advice (blood abnormality) and was replaced by Standby Declared Starter BEAR-POP (K Teetan).

Before being allowed to race again, CHIN CHUN will be subjected to an official veterinary examination.

The start was delayed when BULL MARCHE lost its left front plate on the way to the Start and had to be re-plated.

HAPPY ROCKY was slow to begin.

BEAR-POP was crowded for room on jumping between JOYEUX and SUPER TALENT which shifted in.

MAC ROW knuckled over on jumping and then shortly after the start was steadied when crowded for room between CALL ME ACHIEVER and GIDEON which shifted out.

After the 1100 Metres, JOLLY SPRING was awkwardly placed outside the heels of KING BROTHER.

After the 1000 Metres, SUPER TALENT got its head on the side and shifted in across the heels of JOYEUX.

After this, KING BROTHER was left racing wide and without cover.

After the 800 Metres and again passing the 600 Metres, GIDEON proved difficult to settle and was awkwardly placed close to the heels of JOLLY SPRING.

At the 400 Metres, GIDEON was shifted out abruptly away from the heels of KING BROTHER after being awkwardly placed behind that horse.

BULL MARCHE got its head on the side and lay out rounding the Home Turn and then passing the 400 Metres shifted in, resulting in SLEDGE HAMMER being awkwardly placed close to the heels of BULL MARCHE.

Approaching the 300 Metres, SLEDGE HAMMER was shifted out when crowded for room between BULL MARCHE and GIDEON which shifted out after being awkwardly placed outside KING BROTHER.

Near the 250 Metres, KING BROTHER, which was giving ground, was momentarily steadied away from the heels of GIDEON which, after initially being directed in slightly by BULL MARCHE, then got its head on the side and shifted in away from that horse.

BULL MARCHE was then awkwardly placed close to the heels of JOLLY SPRING over the concluding stages and consequently was not able to be ridden out all the way to the finish.

After the race, J Moreira (SIGHT SEEING) reported that his saddle shifted back in the early stages, placing him at a slight disadvantage.

A veterinary inspection of GIDEON immediately following the race did not show any significant findings.

SIGHT SEEING and SUPER TALENT were sent for sampling. 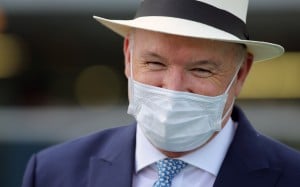 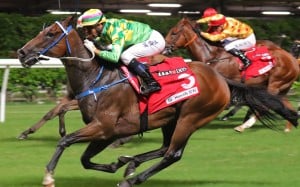 No Valley, no worries for Fownes as he looks to paint Sha Tin Green