Rouge Et Blanc settled worse than midfield and one off the rails, shifted five deep at the 400m and finished nicely to get up in the shadows of the post for the win with a riding change to Joao Moreira. Giggles Forever travelled without cover three deep in third, briefly poked his head in front five deep at the 150m and found one better on the day. Mac Row settled behind midfield along the rails, rounded the final bend five deep and finished nicely to overhaul favourite Gold Dragon by a whisker for third. Gold settled one off in fifth, was held up three deep until the 200m, hit the front 100m out and got swamped close to home. Vara Pearl was taken back from a wide gate to settle fourth from the rear, swung the final bend with three wider out and was making progress late without menacing the placegetters. Grand Champion was ridden for luck from a wide gate, pulled off heels widest out at the 400m and made some ground without looking a threat. Well-punted late, Rugby Ambassador was struggling 250m out.

EASTERN DRAGON shifted in at the start and bumped heavily with RUGBY AMBASSADOR which in turn became unbalanced and shifted in abruptly across the running of STREET CAT which was checked.

RUGBY AMBASSADOR continued to shift in and bumped GOLD DRAGON which then shifted in, inconveniencing TRUE COMMENT and MAC ROW.

From wide barriers, VARA PEARL and D'OR WONGCHOY were shifted across behind runners in the early stages.

Approaching the 1500 Metres, GOLD DRAGON (O Doleuze) shifted in abruptly before being shifted back out, resulting in TRUE COMMENT blundering.

O Doleuze was advised that whilst the shift from GOLD DRAGON was only momentary, nonetheless he must be alert to his mounts shifting ground in similar circumstances.

EASTERN DRAGON proved difficult to settle in the middle stages when racing in the lead.

Passing the 800 Metres, MAC ROW got its head up when awkwardly placed close to the heels of TRUE COMMENT.

At the 600 Metres, ROUGE ET BLANC was checked away from the heels of GOLD DRAGON.

VARA PEARL, which was following, was checked away from the heels of ROUGE ET BLANC, resulting in GRAND CHAMPION, which was trailing VARA PEARL, also being hampered.

When VARA PEARL was checked in this incident, it shifted out and bumped the hindquarters of D'OR WONGCHOY.

Passing the 400 Metres, GRAND CHAMPION was shifted out away from D'OR WONGCHOY after being awkwardly placed close to the heels of that horse which was taken out by VARA PEARL.

At the entrance to the Straight, RUGBY AMBASSADOR was taken wider by ROUGE ET BLANC which shifted to the outside of GIGGLES FOREVER into clear running.

MAC ROW had difficulty obtaining clear running in the early part of the Straight.

GOLD DRAGON was unable to obtain clear running until passing the 300 Metres.

Throughout the race, GIGGLES FOREVER travelled wide and without cover.

When questioned, H Bowman stated that he was not given any specific instructions on how BEAR-POP should be ridden, however, as the horse can be slow to jump, it was anticipated that it would obtain a midfield position.

He said BEAR-POP began well and when he was left racing outside the anticipated leader EASTERN DRAGON in the early stages, he did not believe it was reasonable to restrain BEAR-POP back through the field, rather he allowed the horse to obtain the position outside EASTERN DRAGON without having to ride it along to do so.

He added in the Straight BEAR-POP initially responded well to his riding, however, over the final 200 Metres finished off the race only one-paced.

When questioned, B Prebble stated that, from the outside barrier, he was asked to ride JUMBO SPIRIT, which was having its first start at Sha Tin today, in a rearward position with cover.

He said JUMBO SPIRIT raced greenly and was on and off the bridle throughout the race.

He said he had to ride JUMBO SPIRIT aggressively during the race to maintain its position on the back of D'OR WONGCHOY.

He added JUMBO SPIRIT made the Home Turn awkwardly and in the Straight finished off the race only one-paced.

A veterinary inspection of JUMBO SPIRIT immediately following the race did not show any significant findings.

A veterinary inspection of D'OR WONGCHOY immediately following the race revealed that the horse was displaying an irregular heart rhythm and an endoscopic examination also showed a substantial amount of blood in the horse's trachea.

Before being allowed to race again, D'OR WONGCHOY will be required to perform satisfactorily in an official barrier trial and be subjected to an official veterinary examination.

A veterinary inspection of RUGBY AMBASSADOR immediately following the race did not show any significant findings. 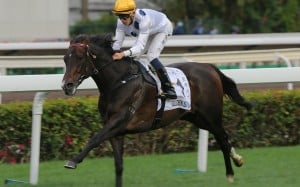