China Delight bided his time at the rear from a wide gate, swung the final bend with one further out and let down willingly to get up in the final few metres for an upset win. Favourite Endorsing settled behind midfield and one off the rails after jumping sluggishly, was hampered coming to the final bend, swung the final bend six deep and finished well to just snatch second by a whisker. Thanksgiving led early on, handed up to Robust Momentum 750m out, narrowly hit the front three deep at the 100m and had to settle for a dead-heat finish with Mighty Wongchoy for third. Mighty Wongchoy was prominent along the rails, straightened near three deep and just missed a Quinella spot. Amazing Always settled behind midfield and one off the rails, switched into the open with three wider out and just finished out of the Quartet. Robust Momentum tracked the leader one off the fence, rushed to the lead 750m out, established near two lengths coming to the final bend and was swamped 50m out. Island Flyer made ground three deep after travelling second from the rear in an improved effort. Good Method was never properly tested over the final 150m. Modern Fortune was one out and one back, straightened five deep and peaked 150m out. Griffindor was badly held up from the 200m following a handy rail's run. Hey Cheers was pulled up mid-straight.

AMAZING ALWAYS shifted out at the start and bumped GOOD METHOD.

From wide barriers, ISLAND FLYER, CHINA DELIGHT and HEY CHEERS were all shifted across behind runners in the early stages.

For some distance after passing the winning post on the first occasion, MIGHTY WONGCHOY proved very difficult to settle and was awkwardly placed close to the heels of THANKSGIVING.

Near the 1200 Metres, both HEY CHEERS and CHINA DELIGHT proved difficult to settle.

After the 1200 Metres, MODERN FORTUNE was checked away from the heels of ROBUST MOMENTUM and shifted in, resulting in GRIFFINDOR being momentarily crowded for room.

For some distance after the 900 Metres, ENDORSING proved difficult to settle.

Near the 550 Metres, ENDORSING shifted out when being checked away from the heels of GOOD METHOD, resulting in AMAZING ALWAYS being crowded and taken out onto the hindquarters of COMMANDANT which became unbalanced.

HEY CHEERS, which was following AMAZING ALWAYS, was shifted out abruptly away from the heels of that horse in consequence.

As the Stewards were satisfied that there was no rider error associated with this incident, no further action was taken.

For some distance after this, ENDORSING was awkwardly placed close to the heels of GOOD METHOD.

Passing the 200 Metres, GRIFFINDOR was checked when crowded for room inside GOOD METHOD which improved quickly inside the heels of MIGHTY WONGCHOY (Y T Cheng) which, after initially shifting out, then shifted back in.

Y T Cheng was advised that whilst there were some circumstances to this incident, nonetheless he would be expected to make every endeavour to prevent his mounts from shifting ground in similar circumstances.

After the 200 Metres, HEY CHEERS broke down in the left front fetlock.

After the 150 Metres, GOOD METHOD was shifted out away from the heels of ROBUST MOMENTUM after being held up for clear running behind that horse.

Over the concluding stages, GOOD METHOD was then held up for clear running behind MIGHTY WONGCHOY and consequently was not able to be ridden out all the way to the end of the race.

Also over the concluding stages, ISLAND FLYER was awkwardly placed close to the heels of THANKSGIVING.

Right on the winning post, CHINA DELIGHT shifted in and bumped AMAZING ALWAYS.

In the Straight, ROBUST MOMENTUM lay out under pressure.

Throughout the race, COMMANDANT travelled wide and without cover.

The Stewards spoke to M L Yeung, the rider of the winner, CHINA DELIGHT regarding his riding out of that horse over the concluding stages.

M L Yeung was reminded of his obligation to ride his mounts out right to the finishing line where circumstances permit.

A veterinary inspection of GRIFFINDOR immediately following the race including an endoscopic examination showed a substantial amount of blood in the horse's trachea.

Before being allowed to race again, GRIFFINDOR will be subjected to an official veterinary examination.

CHINA DELIGHT and ENDORSING were sent for sampling. 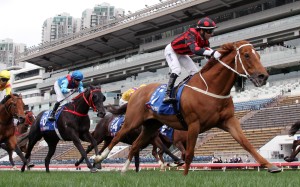 Queen’s Silver Jubilee Cup a mystery, says Size: ‘no one’s got a record at it’

‘When Zac tells him to go, he will go’: Exultant, Purton primed for Gold Cup