Lovely Naughty tracked the leader Sky Full Of Stars, claimed the lead along the fence 400m out and kept up a strong gallop for the win with the smart money coming for him late. Star Of Wai Bo dropped in with cover ahead of midfield and one off the fence from a wide gate, peeled into the clear with two wider out upon straightening and stretched out well to just snatch second on the wire. Mr Ginger settled one off in third, moved to second at the 150m out and was nipped for a Quinella spot. He's not far off a win if he can remain in the grade. Plunged late, Sir John closed off nicely five deep following a one-off run in midfield to edge out Happy Champion for a Quinella spot. Happy Champion travelled second from the rear, straightened three deep, switched widest out at the 150m and finished nicely thereafter. Haymaker kept on better following a prominent run near the inside with a drop in grade. All Times Lucky made some ground without menacing from behind midfield. Mighty Equus had every chance following a rail's run in midfield. Favourite Mellifluent travelled a distant last after getting badly hampered soon after the start and was never a factor.

On arrival at the Start, it was noted that MR GINGER had lost its right front plate.

MR GINGER was replated and examined by the Veterinary Officer who said the horse was suitable to race.

JET SET DRAGON shifted out abruptly at the start, resulting in the horse making contact with MELLIFLUENT (Z Purton) which became badly unbalanced.

A short distance after the start, MELLIFLUENT was badly checked when crowded for room between HAYMAKER and JET SET DRAGON which again got its head on the side and shifted out.

Z Purton reported that after these incidents MELLIFLUENT was unbalanced in its action and did not travel comfortably at any stage.

He said despite riding his mount along, MELLIFLUENT was not able to make up ground and when under pressure in the Straight was inclined to shift ground on a number of occasions.

A veterinary inspection of MELLIFLUENT immediately following the race revealed the horse to have sustained superficial abrasions to the right hind leg.

From a wide barrier, LE PEGASE was shifted across behind runners in the early stages.

Making the turn after the 1100 Metres, JET SET DRAGON shifted out and was awkwardly placed inside the hindquarters of HAYMAKER.

After the 200 Metres, SKY FULL OF STARS, which was giving ground, was momentarily steadied away from the heels of MIGHTY EQUUS which, when shifting to the outside of HAYMAKER, was obliged to shift further as HAYMAKER shifted out under pressure.

When questioned, Mr W Y So, the trainer of SIR JOHN, stated that he anticipated that tonight's race would be run at a good tempo as there were a considerable number of horses engaged in the race that generally race in forward positions in their races.

He said, from barrier 12, he was of the opinion that were SIR JOHN to be ridden to obtain a forward position, it would be left racing wide and without cover and would not be able to finish off the race.

He said therefore in pre-race discussions with B Prebble, the rider of SIR JOHN, it was felt that it would be in the best interests of the horse to take a sit and attempt to obtain cover so that it would be able to close off the race.

He added, as he anticipated, there were a number of horses ridden forward from more favourable barriers and as SIR JOHN was able to obtain cover for the majority of the race, he felt that the manner in which it was ridden provided the horse with the best opportunity to finish off the race.

MELLIFLUENT, LOVELY NAUGHTY and STAR OF WAI BO were sent for sampling. 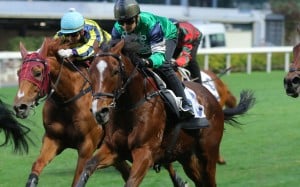