Firming favourite Unique Joyous was ridden quietly three deep near the back, swung the final bend with two wider out and let down strongly to easily take control 150m out for back-to-back wins. Aztec Empire went forward to lead from gate nine, straightened near two lengths on top and grudgingly gave way. Unbeatable Guts eased into the open one off the fence at the 300m following a box-seat run and kept grinding away to fill a placing. He's better over the 1,400m. Winner St Paul's stayed on reasonably well after straightening near six deep after a tough run without cover travelling fore of midfield from a wide gate. Punted late, Good For You enjoyed a lovely run on the back of the speed, ran out to sit one off at the 850m, straightened three deep with every chance and couldn't turn it up another gear. Able Deed was forced deep without cover 850m out by Good For You after a prominent run, straightened four deep and came up one-paced over the final 250m. Polymer Luck eased into the open with three wider out at the 300m after going back from a wide gate and finished off reasonably well in an improved run with a step up in distance. Step High never did gain a clear run until the last 100m.

As the start was effected, RED PEONY lifted its front feet off the ground and as a consequence lost ground.

POLYMER LUCK began very awkwardly and shifted out abruptly, resulting in ARGENTUM being severely hampered and taken out onto FANCY MUSIC which was also inconvenienced.

HOUSE OF LUCK began awkwardly and then shortly after the start, when being ridden along, shifted in and made contact with ABLE DEED.

O Bosson (ARGENTUM) pleaded guilty to a charge of careless riding [Rule 100(1)] in that approaching the 1000 Metres he permitted his mount to shift in when not clear of HOUSE OF LUCK, causing that horse to be checked and to lose the running to which it was rightfully entitled.

When HOUSE OF LUCK was checked, it shifted in and caused some crowding to RED PEONY which was hampered.

UNIQUE JOYOUS, which was following, was also hampered in consequence.

O Bosson was suspended from riding in races for a period to expire on Monday, 6 June 2016 on which day he may resume race riding (2 Hong Kong racedays).

The commencement of the suspension was deferred until after the Sha Tin racemeeting on Sunday, 29 May 2016.

When being steadied away from the heels of the leader AZTEC EMPIRE on the first turn after the 900 Metres, GOOD FOR YOU shifted out and made heavy contact with ABLE DEED.

ABLE DEED was then obliged to race wide and without cover for the remainder of the event.

STEP HIGH was held up for clear running from the entrance to the Straight until approaching the 200 Metres.

Approaching the 100 Metres, STEP HIGH was steadied when disappointed for running between ABLE DEED and GOOD FOR YOU which shifted out under pressure.

When giving ground over the concluding stages, SUPER SWEET ORANGE became unbalanced when bumped by ARGENTUM.

When questioned, Apprentice K K Chiong stated that as her instructions were to have HOUSE OF LUCK in a forward position, she rode the horse along in the early stages, however, HOUSE OF LUCK did not respond to her riding and did not display the early speed that she had anticipated.

She added that after striking interference approaching the 1000 Metres, HOUSE OF LUCK then did not stretch out properly at any stage thereafter and proved disappointing.

A veterinary inspection of HOUSE OF LUCK immediately following the race did not show any significant findings.

The performance of HOUSE OF LUCK was considered unacceptable.

Before being allowed to race again, HOUSE OF LUCK will be required to perform to the satisfaction of the Stewards in a barrier trial and be subjected to an official veterinary examination.

UNIQUE JOYOUS and AZTEC EMPIRE were sent for sampling. 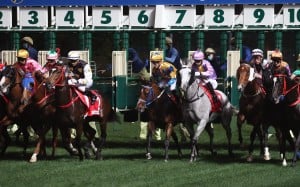