Athena Baby was forced six deep upon straightening by Leading Horse following a oneoff run travelling fore of midfield but finished off well when balancing up to run down favourite California Joy in the final few strides for the win. California Joy enjoyed a lovely run in the box-seat, worked to the lead along the fence 350m out and found one too smart on this occasion. Club Life shared the lead with Kiram to his outside, established a length on top and was giving ground 100m out. Leading Horse settled one-out, one-back from a tricky gate, pushed out five deep 400m out and ran on steadily to fill a Quartet spot. Too Fast was getting going late near the inside following a rails run worse than midfield. Red Dancer was doing some nice work late after travelling third from the rear. Power Of One made only a mild bid widest out when popped the question following a ground-saving trip behind midfield. Razor Quest never got going after travelling fifth from the rear along the inside. Kiram was gone 300m out after vying for the front. Unicorn was a vet withdrawal at the gate.

Whilst being paraded, ATHENA BABY shifted its right front plate.

After this plate was readjusted, ATHENA BABY was examined by the Veterinary Officer and passed suitable to race.

On arrival at the barriers, C Schofield (UNICORN) expressed concern regarding the action of UNICORN.

UNICORN was examined by the Veterinary Officer who said that the horse was lame in its left front leg and accordingly was not suitable to race.

Acting on this advice, UNICORN was withdrawn by order of the Stewards.

Before being allowed to race again, UNICORN will be subjected to an official veterinary examination.

RED DANCER was examined by the Veterinary Officer who said, after the necessary consultations, that the horse was suitable to race.

VANILLA began only fairly and then shortly after the start was shifted across behind runners.

From wide barriers, TERRIFIC MASTER, MONEY MAN and RICKFIELD were steadied in the early stages and shifted across behind runners.

Passing the 1400 Metres, ATHENA BABY shifted in and bumped the hindquarters of CALIFORNIA JOY.

After the 1100 Metres, MONEY MAN was left racing wide and without cover.

At the entrance to the Straight, RED DANCER was shifted in away from the heels of MONEY MAN to obtain clear running.

Passing the 200 Metres, LEADING HORSE was momentarily steadied away from the heels of ATHENA BABY (N Rawiller) which shifted in under pressure.

N Rawiller was reprimanded and advised to ensure that he makes every endeavour to prevent his mounts from shifting ground.

The performance of MONEY MAN, which finished tailed out, was considered unacceptable.

Before being allowed to race again, MONEY MAN will be required to perform to the satisfaction of the Stewards in a barrier trial and be subjected to an official veterinary examination.

When questioned, Apprentice K K Chiong stated that as it was anticipated that the race would not be run at a fast tempo as there was only one established leader, namely CLUB LIFE, she was asked, due to the weight allowance, to be positive on KIRAM and obtain a forward position.

She said she was instructed if no other rider was intent on leading, she could lead, however, if CLUB LIFE went forward, she should shift to the outside of that horse.

She said in accordance with her instructions she rode her mount along and was able to shift in outside CLUB LIFE after the 1400 Metres.

She said she immediately attempted to steady KIRAM, however, the horse commenced to prove very difficult to settle and, despite her efforts, she was not able to get KIRAM to relax.

She said she went for the another hold on the horse after the 1200 Metres in an endeavour to have it steady, however, KIRAM continued to race keenly.

She said rather than continuing to fight KIRAM, she allowed that horse to improve slightly after the 1100 Metres to establish whether the rider of CLUB LIFE was prepared to hand up the lead.

She added however that CLUB LIFE continued to maintain its position which resulted in her again having to steady KIRAM in an endeavour to have the horse settle so that it could finish off the race.

After the race, an endoscopic examination was conducted on ATHENA BABY at the request of Trainer C S Shum.

Before being allowed to race again, ATHENA BABY will be subjected to an official veterinary examination.

A veterinary inspection of RAZOR QUEST immediately following the race did not show any significant findings.

ATHENA BABY and CALIFORNIA JOY were sent for sampling. 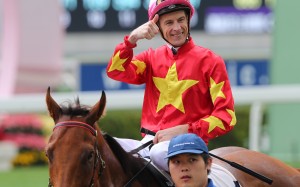 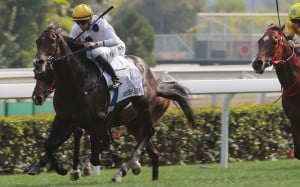