Fancied late in betting, Happy Cooperation fought back to win going away 130m out after being headed for the lead soon after straightening. He had put the writing in his only two other runs this term and might have another win up his sleeves. Circuit King poked his head in front just after straightening after stalking the leader but came up flat 150m out. He continues to perform consistently well but might be near a top. Most Beautiful just fended off favourite Diego Kosta for a placing but he did have his chance in the boxseat. They may need to consider a claimer with a bigger allowance. Diego Kosta peaked on his run 100m out following a prominent run. The rise in weight for an easy last-start win took its toll. Amazing Race made some ground following a midfield run in an encouraging first run back following leg issues. He might need another but does appear to have some ability. No Money No Talk reared badly at the start and left his rider in the gate.

On arrival at the track, it was noted that MOST BEAUTIFUL had sustained superficial wounds to the right hind cannon region.

MOST BEAUTIFUL was examined by the Veterinary Officer who said in in his opinion it was suitable to race.

As the start was effected, NO MONEY NO TALK reared abruptly, resulting in its rider, Apprentice H N Wong, being dislodged and the horse exiting the barrier stall riderless.

Before being allowed to race again, NO MONEY NO TALK will be required to perform satisfactorily in a barrier trial.

From a wide barrier, PERFECT CHOICE was steadied in the early stages and shifted across behind runners.

Near the 800 Metres, FLYING MONKEY got its head up when awkwardly placed close to the heels of DIEGO KOSTA.

Passing the 700 Metres, DIEGO KOSTA raced in restricted room outside CIRCUIT KING which shifted out away from the heels of HAPPY COOPERATION.

Passing the 50 Metres, CIRCUIT KING was awkwardly placed outside the heels of HAPPY COOPERATION due to both horses shifting marginal ground.

Throughout the race, FLYING FORCE and PERFECT CHOICE travelled wide and without cover.

When questioned, C Schofield stated that it had been intended for FLYING MONKEY to utilize the horse??s inside barrier with a light weight and to be ridden in a forward position.

He said however as the start was effected FLYING MONKEY lifted its front feet off the ground, began only fairly and was immediately crossed by CIRCUIT KING.

He said he rode his mount along, however, was unable to prevent DIEGO KOSTA, which showed more early speed than FLYING MONKEY, from crossing his mount approaching the 800 Metres and this resulted in FLYING MONKEY racing further back in the field than had been anticipated.

He added having regard to the circumstances, he was satisfied with the manner in which FLYING MONKEY finished off its race.

A veterinary inspection of FLYING MONKEY immediately following the race did not show any significant findings. 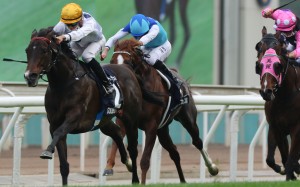