Backed late, Singapore Sling came with a sterling move from behind midfield to mow down Beauty Prince in the shadows of the post for the win. He had caught the eye in his Sha Tin debut and there appears bigger prizes ahead. Beauty Prince nearly stole the prize after clearing to the lead from a tricky gate carrying a feather weight. He's not a prolific winner but continues to knock on the door in four of his five Valley starts this term. Insayshable ran on well following a midfield run on the fence to finish a close third in a very encouraging debut and he should appreciate the longer Sha Tin straight. Favourite California Whip grudgingly gave way after settling a distant second one off in the run. He never runs a bad race but is still on his mark. Marvel Hero stuck on without threatening following a one-off run in midfield. He's better suited over the 1,800m. Marvel Tribe faded following a prominent run. He's better at Sha Tin.

From wide barriers, STAR MAJESTIC, DR LISTENING and PIKACHU were all steadied and shifted across behind runners in the early stages.

At the entrance to the Straight, INSAYSHABLE shifted in away from the heels of MARVEL TRIBE to obtain clear running.

When questioned, N Callan stated that MARVEL TRIBE travelled reasonably well throughout the race behind the speed despite the solid tempo.

He said after being hard ridden rounding the Home Turn, MARVEL TRIBE gave him a brief response, however, soon came under heavy pressure and commenced to lose ground.

He said as the horse was well beaten, he stopped riding MARVEL TRIBE over the final 100 Metres.

He added on pulling up there appeared to be nothing obviously amiss with MARVEL TRIBE.

A veterinary inspection of MARVEL TRIBE immediately following the race did not show any significant findings.

A veterinary inspection of LUCKY GIRL and THUNDER STOMP immediately following the race did not show any significant findings.

Severe Reprimands Race 3: M L Yeung (SUPREME STORM) for shifting in a short distance after passing the winning post on the first occasion.

Race 7: U Rispoli (BANK ON RED) for shifting in approaching the 800 Metres.

Warnings Race 1: S Clipperton (PEARL FURU) for shifting out approaching the turn after the 600 Metres.

A Badel (SPICY DOUBLE) for shifting in approaching the turn after the 600 Metres.

Race 5: Apprentice H T Mo (BEAUTY CONNECTION) for shifting out at the start.

Apprentice M F Poon (GRACYDAD) for shifting in acutely approaching the first turn near the 1000 Metres.

Race 7: N Rawiller (RED ROSE WARRIOR) for shifting out near the 250 Metres. 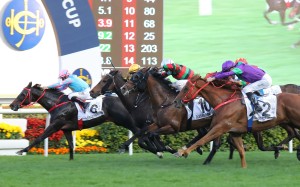