Rickfield came with a good move following a rail run behind midfield to just deny latefancied Cinquante Cinq for the win. He's pretty honest over this course and was well rated. Cinquante Cinq wouldn't go down without a fight after hitting the front 200m out following a tough run going forward three deep to sit outside the leader Kings Shield at the 800m. It was a huge effort up in grade off a light weight and there's more improvement up his sleeves. Kings Shield gradually faded to finish a distant third after rolling forward from a middle draw to lead. He's naturally coming to hand. Last Kingdom nearly got up for a placing following a one-out, one-back run. He has been racing well since a switch to the Valley. Zhang Jiang Rocks finished well late near the outside after settling second from the back following a sluggish break. Let's Take It Easy didn't find much following a handy run along the fence. He requires rating relief.

The Veterinary Officer reported that on arrival at the Start ROMAN IMPERO was lame in its left hind leg and accordingly was not suitable to race.

Acting on this advice, ROMAN IMPERO was withdrawn by order of the Stewards.

Before being allowed to race again, ROMAN IMPERO will be subjected to an official veterinary examination.

VILLA FIONN and RICKFIELD were crowded for room on jumping between LAST KINGDOM which shifted out and WARM THE VOICE which began awkwardly and shifted in.

From wide barriers, ZHAN JIANG ROCKS and SUPER HERO were shifted across behind runners in the early stages.

A short distance after the start, LET'S TAKE IT EASY shifted out and bumped LAST KINGDOM.

Approaching the 1200 Metres, RICKFIELD got its head up when awkwardly placed behind VILLA FIONN.

Passing the 1000 Metres, WARM THE VOICE got its head up on a number of occasions when awkwardly placed behind LAST KINGDOM.

Near the 150 Metres, MARZOUQ was momentarily shifted in away from the heels of LAST KINGDOM.

After the race, C Schofield (AMAZING SATCHMO) reported that after shifting across to race behind WARM THE VOICE in the early stages, he had to ride his mount along passing the winning post on the first occasion as AMAZING SATCHMO was reluctant to maintain its position behind that horse.

He said on that occasion AMAZING SATCHMO was able to improve its position passing the 700 Metres due to the more consistent tempo whereas in tonight's race the tempo of the race did not allow the horse to improve, which was further back in the field tonight than anticipated, as it did at its last start.

He added that in the Straight AMAZING SATCHMO finished off the race only fairly.

A veterinary inspection of AMAZING SATCHMO immediately following the race did not show any significant findings.

A veterinary inspection of MARZOUQ and SUPER HERO immediately following the race did not show any significant findings.

LAST KINGDOM, RICKFIELD and CINQUANTE CINQ were sent for sampling.

Z Purton (NABOO STAR) for shifting in after the 900 Metres.

Warnings Race 5: N Callan (HARRIER JET) for shifting in near the 250 Metres.

K Teetan (BLITZING) for shifting out near the 250 Metres.

C Y Ho (BUOYANT BOY) re the manner in which he rode his mount out over the concluding stages.

G van Niekerk (CHEERS VANQUISHER) re using the whip on a horse which was out of contention.

Suspensions Race 2: M Harley (GENERAL IRON) for careless riding over the concluding stages (from 8 May 2019 until 12 May 2019 on which day he may resume race riding - 2 Hong Kong racedays). 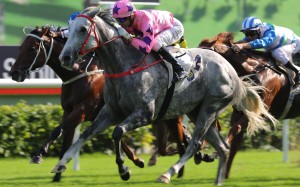