Gentle Breeze was ridden as the best horse outside the leader, advanced to the front near the 200m and won eased down for a second straight win from three starts this term. He's returned better than ever and can win another. Momentum Galaxy finished nicely one from the right after a patient ride third from the rear to grab second close to home. E Master came on nicely widest out from the rear of the field to make it close for second in his first start after a failure in September with blood in his trachea. He rarely produces a bad run sprinting over this course. A tonne of money came for Baltic Whisper who stayed on a reasonably well to fill the frame after easing back to sit deep without cover in midfield. He's not far off a bottom. King's Eminence kept on evenly after a prominent run one-off the fence. He's given a decent sight to finish in the mix in both starts. Favourite Frustrated raised the white flag 100m out after emerging to lead near the 700m.

WINNING FEELING shifted out at the start and bumped the hindquarters of FRUSTRATED which became unbalanced and shifted out and raced tight outside GENTLE BREEZE.

Then near the 950 Metres, KING'S EMINENCE and BEAUTY CHARISMA bumped.

From the outside barrier, E MASTER was steadied in the early stages and shifted across behind runners.

Passing the 800 Metres, KING'S EMINENCE commenced to travel keenly and was shifted out away from the heels of FRUSTRATED after the 800 Metres.

After this, KING'S EMINENCE continued to travel keenly and was awkwardly placed close to the heels of GENTLE BREEZE approaching the 700 Metres.

Then after the 650 Metres, KING'S EMINENCE was left racing wide and without cover.

After obtaining a forward position, BALTIC WHISPER was left racing wide and after the 800 Metres was steadied to obtain cover.

Near the 250 Metres, BEAUTY CHARISMA was shifted in after being disappointed for running between WINNING FEELING and BALTIC WHISPER which shifted in.

For this reason, SKYEY SUPREME was not able to be ridden out all the way to the end of the race.

When questioned, Apprentice K H Chan stated that he was asked to obtain cover on BEAUTY CHARISMA.

He said after being bumped on a number of occasions by KING'S EMINENCE on jumping, he believed that he would have had to make a lot of use of BEAUTY CHARISMA if he were to attempt to obtain a more forward position and BEAUTY CHARISMA would be left racing wide, therefore he elected to steady his mount to obtain cover and this resulted in BEAUTY CHARISMA racing further back in the field than had been anticipated.

A veterinary inspection of BEAUTY CHARISMA immediately following the race did not show any significant findings.

A veterinary inspection of FRUSTRATED and SPECIAL STARS immediately following the race did not show any significant findings.

A veterinary inspection of HARD PROMISE immediately following the race including an endoscopic examination showed a substantial amount of mucus in the horse's trachea.

FRUSTRATED, GENTLE BREEZE and MOMENTUM GALAXY were sent for sampling. 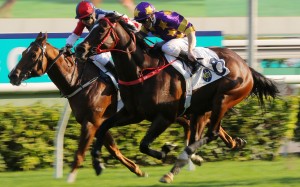