Favourite Winning Dreamer kept on gamely to hold Scores Of Fun after hitting the front 350m out to remain unbeaten in four starts. He's very smart and can hold his own up in grade off a light weight. Scores Of Fun stuck on very well for second after getting posted deep near the speed without cover from a wide gate. It was a terrific effort up in grade after winning both Class Fours. Chicken Dance came from midfield to finish a nonthreatening third. He's run well in defeat in both starts following a lengthy injury-induced absence. Circuit Six finished nicely along the inside from towards the rear to win a blanket finish for fourth. Transcendent came up one-paced over the last 150m following a rail run in midfield. It was a shade better effort with a return to Class Three. Moeraki kept on all right following a handy run. He might be a better prospect down in Class Four. Bright Vision made ground from behind midfield to nearly pick up a minor pay cheque.

GLORIFIED FIRE began only fairly and then lost ground after shifting out and bumping the hindquarters of HAPPY WARRIOR which became unbalanced.

From the outside barriers, BRIGHT VISION and STARZ HERO were shifted across behind runners in the early stages.

Near the 1050 Metres, CHICKEN DANCE was crowded for room between MOERAKI and MASTER ALBERT which initially shifted in and then was taken in by SHOUSON (Apprentice C Wong) which shifted in.

After the race, it was reported that SHOUSON had sustained wounds to the right hind limb.

After the 1000 Metres, CIRCUIT SIX, which was travelling keenly, was inconvenienced by BRIGHT VISION which shifted in away from the heels of HAPPY WARRIOR (H T Mo) which, after shifting in, was straightened to relieve the tightening.

Making the turn near the 900 Metres, SHOUSON was awkwardly placed close to the heels of SCORES OF FUN, shifted out and raced tight inside GLORIFIED FIRE.

MASTER ALBERT, which was following SHOUSON, got its head up when being checked away from the heels of that horse in consequence.

Near the 800 Metres, TRANSCENDENT lost ground when checked as a result of being crowded for room inside MOERAKI which, after initially shifting in away from SCORES OF FUN, then shifted in further when awkwardly placed close to the heels of WINNING DREAMER.

As the Stewards were of the opinion that the racing manners of MOERAKI had been the cause of this incident rather than carelessness being exhibited by any rider, no further action was taken.

Rounding the Home Turn, MOERAKI was awkwardly placed inside the hindquarters of SCORES OF FUN after attempting to improve into tight running between that horse and WINNING DREAMER.

This resulted in MOERAKI being held up for clear running in the early part of the Straight.

Throughout the race, GLORIFIED FIRE travelled wide and without cover and subsequently finished tailed out.

A veterinary inspection of GLORIFIED FIRE immediately following the race did not show any significant findings.

The performance of GLORIFIED FIRE was considered unacceptable.

Before being allowed to race again, GLORIFIED FIRE will be required to perform to the satisfaction of the Stewards in a barrier trial and be subjected to an official veterinary examination.

WINNING DREAMER and SCORES OF FUN were sent for sampling.

Centenary Sprint Cup might not have Stewards’ Cup wow factor, but it’s no less significant 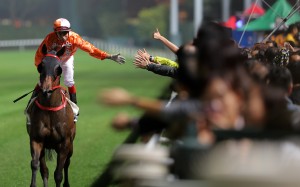