Rank outsider Flying Quest produced a bold run down the outside from near last to win going away 50m out. Tianchi Monster stayed on well for second after barging between runners 350m out following a prominent run. He continues to race well. Reliable Team grudgingly gave way after getting pestered for the lead 700m out by Enjoying. It was his best effort this term. Helene Leadingstar closed nicely from the rear to just miss a placing after bombing the start. He's always a chance over this trip and further. Panfield ran on all right to finish a close fifth after getting shuffled back to midfield at the 400m following a box-seat run. It was a better effort at his second local start with a step up in distance. Golden Spectrum ran on without menacing from towards the rear. He's a better prospect in Class Three. Butterfield came up one-paced after looming a chance at the 300m following a one-off run in midfield. He doesn't quite get the 2,000m.

As the start was effected, HELENE LEADINGSTAR (C Y Ho) got its head up and lost ground.

Before being allowed to race again, HELENE LEADINGSTAR will be required to perform satisfactorily in a stalls test.

C Y Ho reported that in this incident when HELENE LEADINGSTAR threw its head up, it struck him in the face.

ENJOYING blundered at the start and shifted in, resulting in BUTTERFIELD and LAKESHORE EAGLE being crowded.

THINKIN' BIG and GOLDEN SPECTRUM made contact on jumping.

Approaching the 1800 Metres, ENJOYING was steadied away from the heels of THINKIN' BIG (J Moreira) which shifted in when not quite clear.

At the 1800 Metres, GOLDEN SPECTRUM was steadied to allow BUTTERFIELD to cross.

Approaching the 1600 Metres, BUTTERFIELD got its head up and proved difficult to settle when being steadied away from the heels of TIANCHI MONSTER.

Rounding the Home Turn, TIANCHI MONSTER raced tight between THINKIN' BIG which was being shifted to the outside of the heels of ENJOYING to improve and BUTTERFIELD which improved quickly to its outside.

In this incident, TIANCHI MONSTER became unbalanced after making contact with BUTTERFIELD.

PANFIELD was held up for clear running from on straightening until after passing the 150 Metres where it was shifted to the inside of TIANCHI MONSTER to continue improving.

When questioned regarding the performance of THINKIN' BIG, J Moreira stated that after settling outside the leader RELIABLE TEAM, THINKIN' BIG travelled comfortably in the early stages, however, along the Back Straight when ENJOYING improved to be racing outside his mount, THINKIN' BIG commenced to travel keenly and would not settle.

He said after allowing ENJOYING to cross his mount approaching the 900 Metres, THINKIN' BIG continued to travel keenly and after giving him some response in the early part of the Straight then weakened over the final 200 Metres.

The Veterinary Officer reported that THINKIN' BIG was making a breathing noise on returning to the unsaddling area and an endoscopic examination showed a substantial amount of mucus in the horse's trachea.

When questioned, C Soumillon stated that he was instructed to find cover on ENJOYING one horse away from the rail.

He said after stumbling at the start ENJOYING then recovered and commenced to improve to take up a relatively prominent position where he hoped to be able to shift in and find cover.

He said due to the moderate early tempo he was unable to shift in and take up a trailing position, therefore he allowed ENJOYING to roll forward and shift across in advance of THINKIN' BIG to race one horse away from the rail outside the lead approaching the 900 Metres.

He said ENJOYING then came under heavy pressure on straightening and was disappointing in the manner in which it weakened in the Straight.

He added however that, in his view, the fact that ENJOYING was required to do a lot of work throughout the early and middle stages to obtain a position closer to the rail was the primary reason for the horse's disappointing performance.

A veterinary inspection of ENJOYING immediately following the race did not show any significant findings.

The performance of ENJOYING, one of the favoured runners for today's event, was considered unacceptable.

Before being allowed to race again, ENJOYING will be required to perform to the satisfaction of the Stewards in a barrier trial and be subjected to an official veterinary examination.

BUTTERFIELD, FLYING QUEST and TIANCHI MONSTER were sent for sampling. 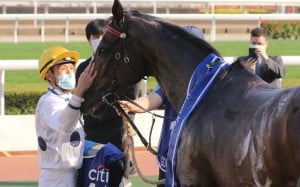