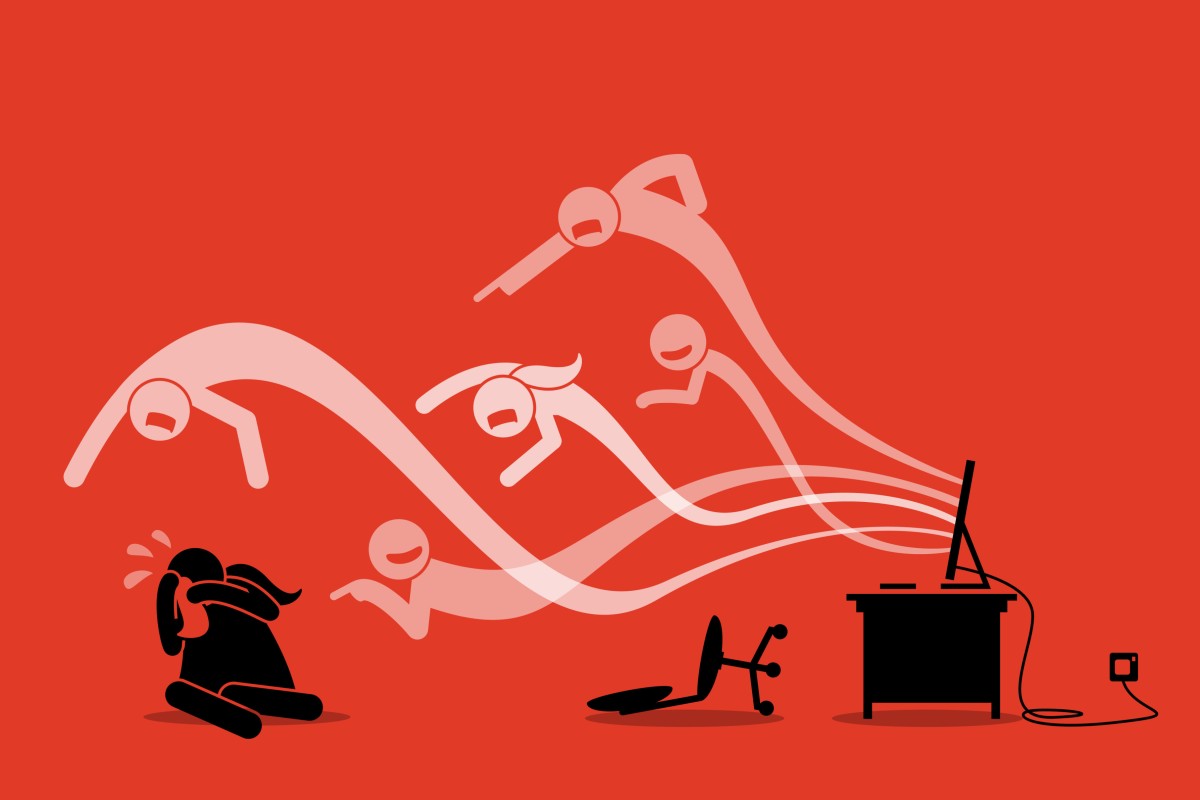 For many bullies, physical harm isn’t enough; they aim to target another student mentally and emotionally through cyberbullying. Photo: Shutterstock

Cyberbullying cases are on the rise in Hong Kong schools as the pandemic continues to take a heavy toll on the city’s students.

A school social worker said more students had become victims of doxxing and identity fraud on social media and the problem was becoming worse.

Earlier this month, a video that went viral showed a 12-year-old girl kneeling and being slapped in the face about 20 times by a group of teenagers in broad daylight on the rooftop of a building in Hong Kong.

The fine line between cancel culture and cyberbullying

The number of cyberbullying cases reported in Hong Kong’s public-sector primary and secondary schools has almost doubled in the past four years, from 54 cases in 2017/2018 to 105 in 2020/2021, according to Education Bureau figures.

Social worker Alan Wong Wai-lun, who has worked in the city’s schools for more than 15 years, said many bullying cases had taken place online, making it difficult for social workers and schools to intervene.

He noted that bullying is no longer just about physical harm, but abuse on an emotional level, for example, harassment or verbal threats that make the victim feel inferior or ashamed.

“The goal of these abusers is often about tarnishing one’s reputation by using their influence online,” he said, adding that some students would attack others in the form of a “public trial”, where perpetrators take to the internet to condemn the victims openly or further humiliate them by invading their privacy online.

Wong said he came across a case where a student pretended to be the victim’s love interest and tricked him or her into starting a conversation. The entire conversation was revealed online. In an extreme case, naked photos of a student were circulated on the internet.

He added that most of the students who reached out for help were those who witnessed the incidents rather than the victims, and usually the ones who came forward did so because they had reached a “dead end”.

“The way schools and social workers handle a case of abuse affects whether students would want to reach out for help,” Wong said.

Nearly 1 out of 4 (almost 25 per cent) polled were often or always worried about being bullied or having to deal with violence from other children and young people, according to research conducted by Save the Children Hong Kong, an NGO that supports marginalised children. Another survey by the NGO also showed that 20 per cent of secondary school students surveyed had experienced cyberbullying over the past year.

Around 30 per cent of students surveyed didn’t think their school had done enough to stop bullying, assist disabled children who needed special support, or taught them how to use the internet safely.

Around 1 in 4 students polled by Save the Children say they are worried about being bullied or dealing with violence. Photo: Shutterstock

“As youth or education workers, very often we work on preventive education. But when these things happen, do we grab the chance to walk through the incident with them, or help them process their emotions?” Wong said.

The social worker said that many students who had experienced bullying did not understand why teachers or social workers did not take the time to talk to them after what had happened, which had left them with emotional scars.

“I believe it is crucial to reach out to the bystanders, and education is an important part,” Wong added.

While many victims of bullying and bystanders often hesitate to come forward, youth-oriented think tank MWYO, set up by tycoon and Youth Development Commission vice-chairman Lau Ming-wai, has organised a social media campaign to call for attention on bullying through the lens of the onlookers who bear witness to such incidents.

In 2019, the group conducted research on bullying, which revealed that 33.9 per cent of the city’s secondary school students considered themselves as “bystanders”, while victims and abusers accounted for 12.2 per cent and 6.5 per cent, respectively.

However, many students who consider themselves bystanders often take on roles as “cheerleaders”, encouraging or going along with the bully, Wong said.

Angus Chan, a researcher for MWYO, believe that witnesses play an important role in addressing bullying.

Bullying increased during the pandemic, even with class suspensions

“It is not just the victims who are hurt during abuse, but also bystanders who can be adversely affected on some levels,” said Chan.

A lot of onlookers did not intervene because they were often afraid of the repercussions – possibly “revenge” by the perpetrators, he added.

“Through this research, we hope to understand how this mindset comes together and how these bystanding students can have more confidence to help stop these abuses, or that they don’t need to be afraid of being the next victims when they speak up,” he said, adding that it is crucial to address abuse as soon as possible and educate teens on how they can cope with it.

“No Bullying 852”, organised by MWYO, invites the city’s secondary school students who have witnessed cases of abuse to share their experiences and reflections through different media including photography, paintings, short films, music, and text. All submissions will be published on MWYO’s Instagram account and an online exhibition in September. The deadline for submissions is August 14.