The New Year feature proved a timely celebration for leading jockey and trainer as they combined with 'an ideal 1,400m horse' 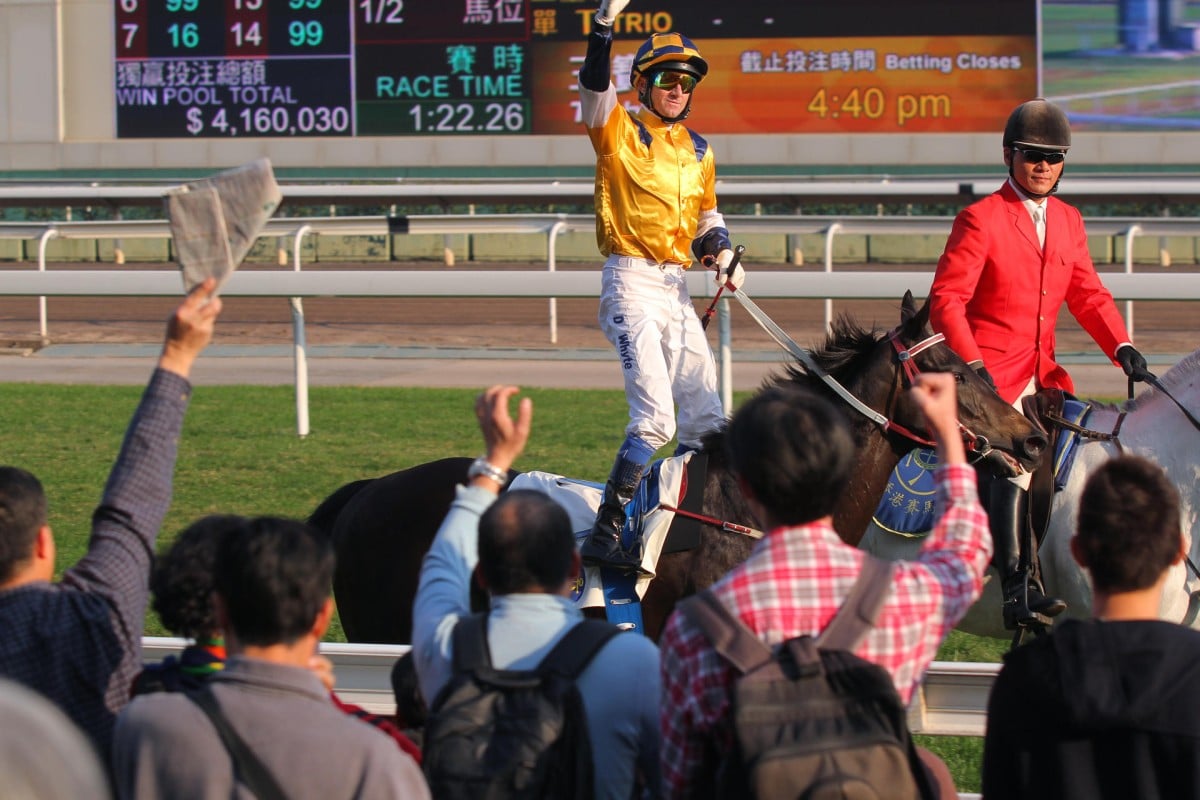 Douglas Whyte is cheered by the crowd as he brings Sterling City back to the winner's circle after his victory in the Chinese Club Challenge Cup. Photo: Kenneth Chan

It was copybook stuff from Sterling City in the traditional New Year feature to give champion jockey Douglas Whyte his first win in the Group Three $2.5 million Chinese Club Challenge Cup and to end a 24-year drought for leading trainer John Moore.

Moore, who makes such a habit of winning these black type features, had won the race twice previously with Bettabob and Northern Tide, but the latter had been in 1990.

And he never had a great deal to worry about as Whyte steered a faultless passage on the race favourite, tracking the three anticipated speed horses to the home turn then putting his rivals to the sword before Destined For Glory got home to give Moore a quinella in the 1,400m contest.

"We've always said Sterling City was a 1,400m horse, it's just that he's got to a level where there aren't many 1,400m races for him," Moore said. "Fresh he's very good at 1,200m but 1,400m is probably his ideal. He got the gun gate, the gun ride and that was just a steering job for Dougie and the horse has won without even being hit with the whip."

Moore had endured just a drought, but Whyte's comprehensive resume of all the trophy races in town was missing the Chinese Club Challenge Cup altogether before the jockey paved the way to the win by opting to make more use of Sterling City early rather than risk becoming cluttered up behind horses.

"The gate looked awkward to me beforehand - gate one for a horse who is normally getting back - but I rode him more positive and got a sweet run around," Whyte explained.

"But he's a nice horse to ride - not many horses have a turn of foot like that. He's only a small horse but he lets down and gives you everything and really accelerates strongly. Giving weight to all but the top two, it was a good effort considering there was no loafing in the race and he ran some time."

Moore's planning conundrum with Sterling City returns now, however, with the only Group One over 1,400m, the Queen's Silver Jubilee Cup, still two months away on March 16 and the horse's rating leaving him few options in the meantime.

"We'll have to look at the program but we need to keep finding him something between 1,200m and 1,600m, if we take him that far, maybe the Stewards' Cup," Moore said.

"As far as taking him overseas for something, I'll have a chat to the owners and we can talk about Singapore later in the season. I think he's a good Group Two horse anywhere internationally, but he just has his work cut out if he runs into the very best."

The Cup was part of a late treble for Moore, who snared three of the last four races with Sterling City, Tango Fire (Brett Prebble) and Rewarding Hero (Whyte), and part of a winning three-timer for the jockey as well.

But while Whyte was winning the feature after choosing to ride Sterling City over regular partner, lightly-weighted All You Wish, the Durban Demon was pleased with that horse's effort in finishing third under Karis Teetan.

"I could see him out of the corner of my eye getting home behind me - he'll be a nice ride back up to a mile," he smiled.