The Hong Kong-based "Magic Man", jockey Joao Moreira linked with Sydney racing's own magician, Chris Waller, to land his maiden Australian Group One yesterday and a winning treble at one of the highlight days of the Randwick calendar.

Sydney's champion trainer, Waller had been instrumental in importing the Brazilian for the meeting with his main assignment the Epsom Handicap on He's Your Man and Magic Joao didn't let him down, arriving in the final stride to win the famous mile handicap and nosing out stablemate Royal Descent.

Moreira had already pulled a rabbit from a hat overcoming trouble in running to win a Listed support race for Gai Waterhouse, then teamed with Waller to win a Group Two three-year-old sprint before adding the Epsom.

This is really, really special for me ... I have been chasing a Group One win in Australia for probably four or five years and finally we have got there
Joao Moreira

Waller has made regular sport of taking out the first two and three placings in Group One races - and recently saddled up the first six in a Group One - but for Moreira the experience was something new.

"This is really, really special for me," Moreira said. "I have won some other Group races here before, but I have been chasing a Group One win in Australia for probably four or five years and finally we have got there, so that means a lot to me."

Clients of Waller's yard had suggested thinking outside the box and flying in Moreira when the trainer had been struggling to find a jockey to ride He's Your Man at his handicap of 116 pounds in the Epsom and Waller ran with the idea. 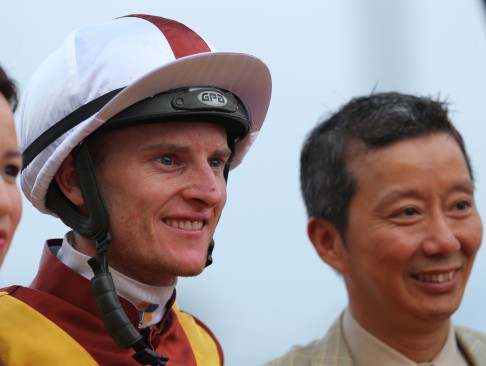 "I've always maintained you have to use the jockeys in form and we chose Joao. I liked the fact he had ridden in Australia before a few times - while not with a lot of luck, he'd had the experience," said Waller, who added that He's Your Man may now target the Mackinnon Stakes on Derby Day at Flemington next month.

Moreira is the second Hong Kong based rider to take an elite race in Sydney this carnival - with Zac Purton successful on Sacred Falls for Waller - and the Brazilian's dashing display at Randwick could potentially open the way for he and Purton to take their rivalry to Australia's biggest racing carnival in Melbourne in the coming weeks.

Moreira said he has been booked for the ride on lightweight Gris Caro in the Caulfield Cup on October 18, where Purton is engaged for Japan's Admire Rakti. The Brazilian is a possible rider for Waterhouse-trained three-year-old Almalad if he makes the Cox Plate field.