Douglas Whyte's Classic victory is a first Down Under Douglas Whyte on Saturday joined a growing group of Hong Kong-based jockeys who have tasted feature success abroad after winning his first Australian Group One, the Kingston Town Classic in Perth.

"It feels terrific," Whyte said. "It's been something I've wanted to do for a long time, ride a Group One winner in Australia, and I have to thank Chris Waller and the connections for affording me the opportunity."

"He's just a phenomenal trainer - he delivers his horses in impeccable condition and if you can get the right sort of run and produce the goods, he makes your job a lot easier."

The 13-time Hong Kong champion jockey had previously teamed with Waller in the Caulfield Cup, riding seventh-placed Junoob, and was called on to replace the suspended Nash Rawiller on Moriarty.

Meanwhile, the foreign entrants for the Hong Kong International Races will have all arrived by today, one week out from the showpiece, and like any experienced travellers, the handlers of locally owned globetrotter Red Cadeaux knew to avoid the weekend rush. 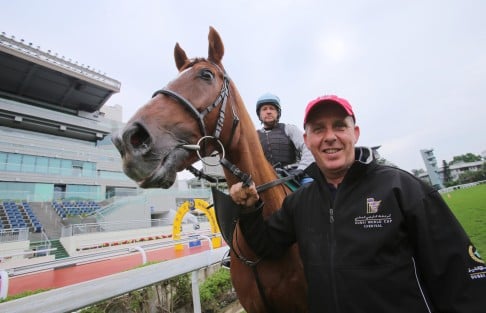 Red Cadeaux is world racing's most renowned frequent flier and after touching down for his fourth shot at the Hong Kong Vase, a race he won two years ago, has logged nearly 200,000km and stepped aboard 19 international flights.

The eight-year-old, fresh off a record-breaking third runner-up placing in the Melbourne Cup, was one of the first of 24 overseas hopefuls to arrive ahead of next Sunday's four international Group Ones at Sha Tin.

The Ed Dunlop-trained stayer arrived late last Monday, but yesterday's arrival of 15 horses from Japan, Ireland, England and Germany marked the start of "peak hour" at the Sha Tin quarantine compound, with two remaining overseas-trained runners scheduled to have arrived overnight from Japan.

During the last three years Red Cadeaux has competed in eight different countries and his constant companions during that time have been foreman Robin Trevor-Jones and trackwork rider Stephen Nicholson. Trevor-Jones said it was the gelding's remarkably cool and calm temperament that made him the perfect airline passenger.

"He travelled here without a care in the world. Some horses get very nervous, but he just keeps his cool," Trevor-Jones said.