In April, Oliver Wong lay on his deathbed in Hong Kong and watched on television as his filly Gust Of Wind won the Australian Oaks at Randwick.

Apollo Ng Shung will carry a small photo of his late uncle at the Melbourne Cup. Photos: May Tse

In April, Oliver Wong lay on his deathbed in Hong Kong and watched on television as his filly Gust Of Wind won the Australian Oaks at Randwick.

Two months later the popular owner succumbed to cancer, but not before he had come up with a two-part plan for his horse.

A Melbourne Cup win with Gust Of Wind would complete part one of his dying wish, while part two would be an international win at Sha Tin in December.

It will be quite emotional. Let's win it for Oliver - we are a close family and I treated Oliver as more than an uncle
Apollo Ng

Gust Of Wind will carry the green and yellow silks of Wong's nephew, Apollo Ng Shung, a prominent Hong Kong racing media figure, who will carry a small photo of his late uncle at the A$6.2 million (HK$34.28 million) showpiece on Tuesday.

"I will carry the photo everywhere and if Gust Of Wind manages to win, Oliver will be there leading the horse in with us," Ng said. "It will be quite emotional. Let's win it for Oliver - we are a close family and I treated Oliver as more than an uncle.

"He was a gentleman and he had a great attitude to racing. He never blamed jockeys, never blamed horses, he just loved the sport. It would mean a lot and to have a runner on a day like this is a dream that we started in 2011." 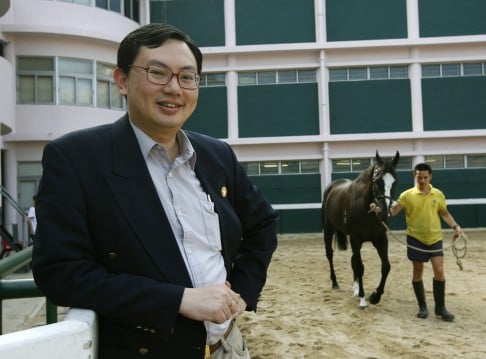 Wong owned a number of horses in Hong Kong, but in 2011 he and Ng decided to start buying fillies and mares with a view to breeding their own champions to race overseas.

They have had great success - not only did Gust Of Wind win an Oaks, but Thunder Lady won the Wakeful Stakes at Flemington last year.

In fact, had Wong been alive, Thunder Lady would have been one of three horses he had an interest in to race on Victoria Derby Day at Flemington yesterday.

Thunder Lady ran eighth in the Lexus Stakes, but Wong also owned Wakeful runner Dawn Of Hope and the dam of three-year-old sprinter Keen Array, who finished second in the Coolmore Stud Stakes.

Since Wong's death, his widow has sold many of his racing interests, with Owen Glenn, owner of Hong Kong Cup third Criterion, buying a majority share in Gust Of Wind, but Ng has retained his share in the mare.

Ng says Gust Of Wind, who was fourth in the Caulfield Cup and will carry just 51kg on Tuesday with Hong Kong-based jockey Chad Schofield aboard, has always looked a stayer who would be suited by the two miles at Flemington.

"She has been aimed at this day from the first moment of her preparation and it looks like it is going perfectly.

"Her run in the Caulfield Cup was great and she has top form from the Sydney autumn. She was the last horse to beat Winx," Ng said, referring to the recent Cox Plate winner who Gust Of Wind outstayed in the Oaks.

"It is a race-by-race proposition, but let's hope she can come back and race here at Sha Tin. She is entered for the Hong Kong Cup and Hong Kong Vase."