A better draw than last start and favourable set weights conditions can help Peniaphobia to cement his position as premier sprinter in town with a win in the Centenary Sprint Cup. Peniaphobia was the star of the show in the Hong Kong Sprint and can win again. Photo: Kenneth Chan

A better draw than last start and favourable set weights conditions can help Peniaphobia to cement his position as premier sprinter in town with a win in the Centenary Sprint Cup.

Somehow, the Tony Cruz-trained speed machine is still not the highest-rated sprinter in Hong Kong, despite an exhilarating wire-to-wire win in last month's Hong Kong Sprint - but that could change after today's 1,200m Group One.

Peniaphobia had already asserted himself as a horse of the future last season, even as a late season three-year-old, with a Group Two Jockey Club Sprint win and a narrow second on international day.

After turning four, the Irish-bred son of Dandy Man then secured his first Group One in last year's Centenary Sprint Cup, when the race was held over 1,000m, before heading to the US$1 million Al Quoz Sprint in Dubai and confirming his international class with a runner-up finish to Sole Power.

After a somewhat unconvincing start to the season, with the gelding surrounded by rumours he was suffering from a breathing complaint, Peniaphobia quickly worked his way into form and on international day, drawn widest in barrier 14, he produced a sensational effort that indicated the now five-year-old is in his prime. 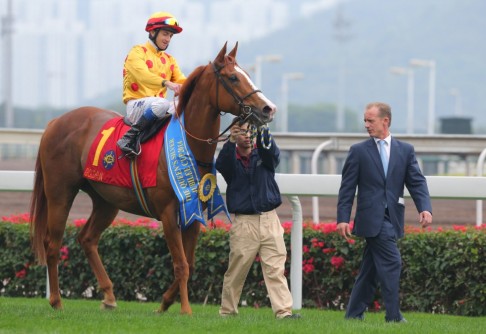 Joao Moreira sprung Peniaphobia from the stalls with a lightning jump and he was able to control the race from the front.

Barrier two today might not make his task that much easier in the end, but the draw does make finding the rail a much more straightforward task and overall the low gate is a net positive on last time.

In fact, the early speed map looks relatively simple, with the four highest-rated horses drawn alongside each other in gates two through five, and others might be reluctant, or unable, to take the powerhouses on.

Gold-Fun is likely to end up behind Peniaphobia, while Purton on Aerovelocity might not be as aggressive as usual on a horse that comes into the race with just one run in more than six months.

Gold-Fun's run on international day was full of merit and he will be ready to strike if Peniaphobia tires late, while Not Listenin'tome looks like he is hitting his straps, although he enters under a fitness cloud after a blood abnormality was detected yesterday. That said, John Moore's import is finally finding some consistency to go with his previous flashes of brilliance after a third on international day and a strong win with 133 pounds in the Group Three Bauhinia Sprint Trophy.