As if it wasn’t bad enough for Joao Moreira’s rivals before – now there are two Brazilians in town after the arrival of Silvestre de Sousa, and the former Sao Paulo Jockey Academy classmates started the day like it was their own two-man show.

On Kim Glory, everything went right out of the gates – we got a very good jump, we got lucky
Derek Cruz

Moreira and de Sousa won the first five races between them – Moreira with a treble, and de Sousa continuing his strong winter stint with a double, giving him eight wins from seven meetings so far.

“Joao really is something else, he is hard to beat,” de Sousa said after straight track wins on Kim Glory and My Little Friend were surrounded by Moreira’s victories aboard Fortune Giggles, Who Else But You and Aztec Empire.

The double by De Sousa makes his decision to extend his stay by three weeks look even smarter – although it is unlikely he will get another chance to win on the two horses that were successful for him yesterday. 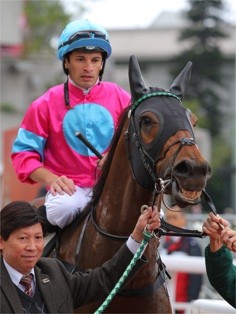 “On Kim Glory, everything went right out of the gates – we got a very good jump, we got lucky because he isn’t a very good horse,” he said of the Derek Cruz-trained five-year-old.

Benno Yung Tin-pang’s My Little Friend might have more ability than Kim Glory, but he has his own limitations, being a roarer, and that means his best will always be in straight races.

“There aren’t many races for him there, this was the first since November,” Yung said. “He is actually a very good horse, and he would be a decent 1,200m or even 1,400m horse, but he will probably only ever win over 1,000m here.”

Just how hard it is to beat Moreira was illustrated by the fact Zac Purton scored a massive 54 Jockey Challenge points courtesy of two wins and five seconds, yet the Magic Man still topped him with 58.

Moreira extended his lead to 53 in the jockeys’ championship when he moved to 84 wins for the season so far and remains on track to break his own record of 145 wins he set last term. 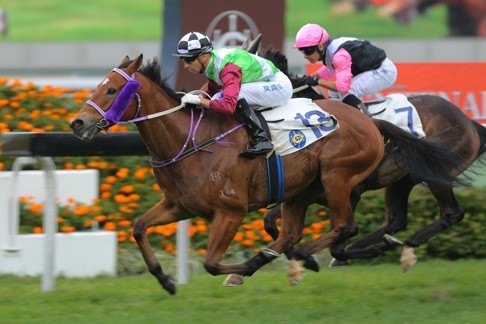 Aztec Empire had won twice for Brett Prebble in Class Five but when the five-year-old jumped in class the Australian jockey had to forego the ride due to a light weight.

Still, despite the horse’s good form, trainer Chris So Wai-yin said it took some convincing to get Moreira to take the ride.

“We put him in a trial just so Joao could ride him, and hoping he would then take it,” So said. “I was pretty confident with the light weight, but now, things are going to get interesting and a lot more difficult with his rating back up near 50.”