Chris So looks set to have plenty of fun with Packing Starcraft next season. Photo: Kenneth Chan

One of the redeeming features of what can, at times, be a dreary end-of-season period is the opportunity for horses to stamp themselves as types to follow come the new term.

It’s a time when many three-year-olds are seen for the first time, all with eyes on the classics next season – no matter where they find themselves in the ratings now.

It is a big ask to progress off a mark of 52 now to reach any of the races of the four-year-old series, but it is not impossible.

With that in mind, there looks no better black booker from Wednesday night’s Happy Valley card than Chris So Wai-yin’s Packing Starcraft, who found the line very nicely for fourth at his first outing and entered every black book in Hong Kong in the process.

Snagged back to last from a wide gate by Neil Callan, the Irishman immediately headed for the rail on the three-year-old before dashing up inside runners. On the turn, however, Callan found himself second last and unable to improve. 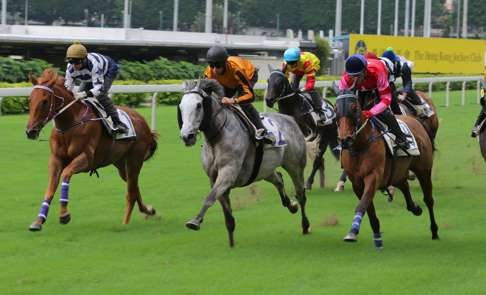 The race did collapse up front, allowing Apache Spirit to dash through and score, but Packing Starcraft recorded the fastest final sectional and more than matched the effort of the winner.

There were still signs of greenness too, overracing slightly and wandering about a little bit. He should be greatly improved for the experience and just slight improvement will see him incredibly hard to beat next time out, perhaps over 1,400m at Sha Tin.

Arriving in November from New Zealand, Packing Starcraft was initially with Andreas Schutz before a February transfer saw him moved to So’s yard.

He had not been out of work since then, trialling four times and turning up at the races very fit.

Classic Mile dreams might seem grand at the moment, especially off just one start, but Packing Starcraft looms as the type who could sneak into the race and acquit himself admirably.