The Prix de l’Arc de Triomphe remains the race above all others that the Japanese want to win and Noriyuki Hori-trained Duramente can lock in a bid at the world’s highest-rated race with victory in today’s Takarazuka Kinen (2,200m) at Hanshin in Osaka.

The Takarazuka Kinen is a race with a difference – it is one of two all-star races held in Japan each year, where a public vote determines the majority of the field. The other? December’s Arima Kinen, the race which annually generates the most turnover, anywhere in the world.

Many of Japan’s older stars have been engaged here, although the field is missing the likes of Japan Cup winner Shonan Pandora, superstar miler Maurice and Dubai Turf victor Real Steel.

In some ways, it can be seen as Japan’s Arc trial for the older horses, even if the feature is not until the first weekend in October.

In the last decade, the three Japanese horses to have placed in the Arc – Deep Impact, Nakayama Festa and Orfevre – all went to France with the Takarazuka Kinen on their records, and Duramente (Mirco Demuro) can join them before he attempts to trump them all in Paris. The son of King Kamehameha took two of the three legs of the Japanese Triple Crown last year – the Satsuki Sho (2,000m) at Nakayama and Japan’s Derby, the Tokyo Yushun (2,400m), before he succumbed to fractures to both front legs and was sidelined for the rest of the season.

He wasn’t seen again until February, when he narrowly defeated today’s opponent Ambitious, but a number of factors were against him that day – fitness, ground, and a tender ride from Christophe Lemaire.

It was far from an ideal preparation for the Sheema Classic in Dubai, against some of the world’s leading 2,400m horses. To make matters worse, he pulled a shoe on his way to the gates at Meydan and raced barefoot, definitely not ideal for a horse second-up off leg fractures.

With all that in mind, his effort to finish a two-length second to Roger Varian’s Postponed, with the likes of Japan Cup runner-up Last Impact, Hong Kong Vase winner Highland Reel, Prix Ganay winner Dariyan and Mackinnon Stakes winner Gailo Chop behind him, was nothing short of extraordinary.

The form was also franked when Postponed ran out a four-and-a-half length winner of the Coronation Cup. 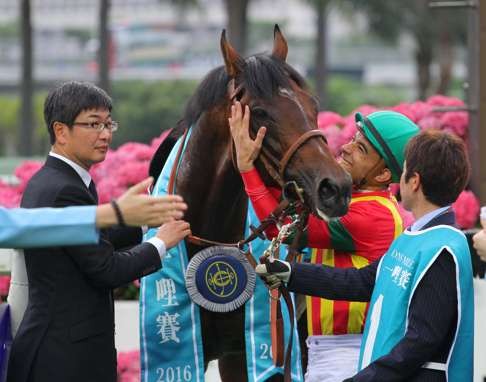 When all is said and done, it’s as simple as this: if the right Duramente turns up in Osaka today, he will be winning.

However, if he is not on song, it is a wide open race with plenty of chances.

Kitasan Black (Yutaka Take) drops back from the 3,200m of the Tenno Sho (Spring), where he recorded a gritty win over Curren Mirotic, but he is a tough on-pacer capable over a variety of distances and looks to strike a race with little speed.

Flashy chestnut Toho Jackal (Manabu Sakai) also looks to be finding form, coming off a fifth to Kitasan Black in the Tenno Sho. He was fourth in this race last year off a nine-month lay-off, but was lacklustre until his last effort.

Also don’t be surprised to see Lovely Day (Lemaire) and Satono Crown (Yasunari Iwata) return to form after both were well-beaten in the Audemars Piguet QE II Cup behind Werther. In particular, Satono Crown may add value to exotics.