The impressive Class Two winner may tackle the Sha Tin Mile Trophy on the final day of the season, where he would come up against highly rated stablemate Helene Paragon The timing in their careers is slightly awry but the principle remained intact yesterday after Joyful Trinity impressively won the same Class Two that Sun Jewellery took out last year to advertise himself as a future Group class performer.

On June 27 last year, Moreira won the final race on then three-year-old Sun Jewellery, who scooted away with the Class Two over 1,400m like the future star he became with wins in the Classic Mile and Classic Cup, and Moreira and John Moore were singing from the same hymn sheet after four-year-old Joyful Trinity’s win – a year older, sure, but carrying a lot more weight than Sun Jewellery had done.

“Wow, that was impressive – I’d love to know what his final 400m sectional was,” said Moore immediately after Joyful Trinity swooped in the final 100 metres to win fairly narrowly for those who took the short odds, but with real conviction. 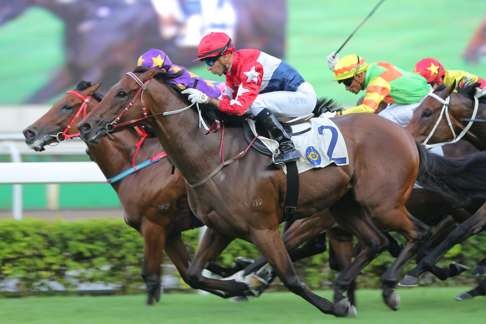 “To be honest, I thought he’d given them too much start when they straightened up. He really had to devour the ground to get to those leaders and he carried a decent weight too, but he did it and now I really think we are looking at a Group horse for next season. He has quite a future.”

Before then, Moore said Joyful Trinity may clash with stablemate Helene Paragon in the Sha Tin Mile Trophy, where he will need to find a rider if Moreira sticks with Helene Paragon, but the jockey himself was non-committal.

“That would interesting. I’m not sure which one I would ride if I have to choose but there is some time left for me to think about it,” Moreira said. “I have always thought this one felt like a good horse and he proved it to me today, making up so much ground. I think we must have been 10 lengths off the leaders at the top of the straight and he didn’t just get there, he got there and was running away.

“That’s what good horses do. He could have run for another 100 metres. And if John says he thinks he is Group class, then I wouldn’t say anything against that.” 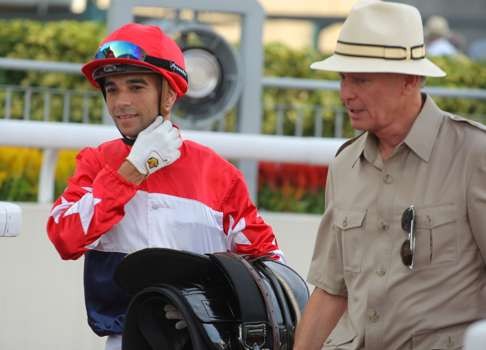 It was the happy ending to an otherwise forgettable day for Moreira, and for his supporters who had backed the Brazilian rider at odds of 1.3 to win the Jockey Challenge – and collected, but not without sweating bricks most of the day as he went winless.

Moreira picked up some minor placings during the afternoon to keep him in contention in the points score, but the parade yard punters were starting to get restless, a few half-heartedly catcalled the champion rider after he climbed on board Joyful Trinity, and he didn’t hit the lead in the Challenge until the gelding’s number was posted.

“It wasn’t my best day, but I have had worse days – at least I will go home with one win,” he said after taking his season’s tally to 159 with just the three cards remaining.