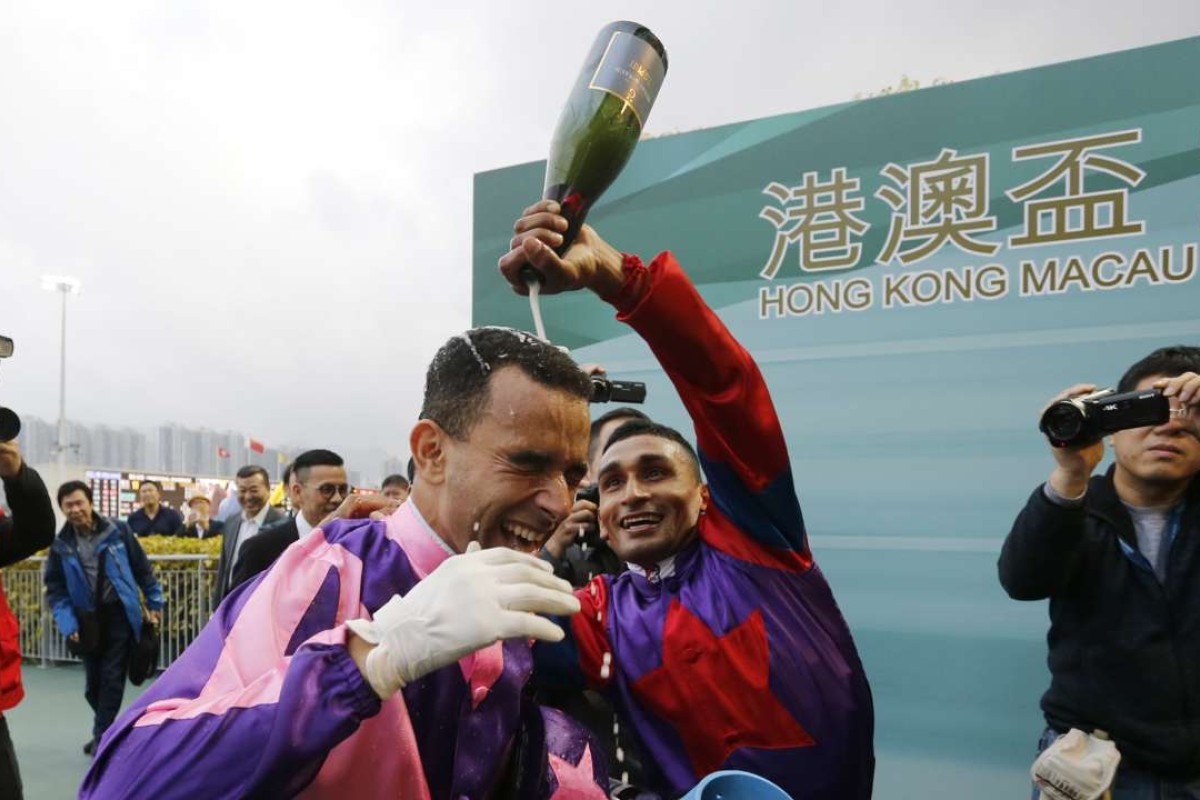 Joao Moreia is doused by champagne by fellow jockey Karis Teetan after notching his eighth win of the day aboard Prawn Baba. Photos: Kenneth Chan

They say a week is a long time in politics but Joao “Magic” Moreira showed just how long it can be in horse racing when the champion jockey bounced back from one of his worst days to rewrite the record books with eight wins at Sha Tin.

Just seven days earlier, when Moreira had failed to ride a winner at a Hong Kong meeting for the first time since April, 2016, it was nearly the story of the afternoon – the Magic Man had put his hand in the hat and pulled out only fresh air.

But when Prawn Baba surged home in the last race, racecaller Brett Davis captured the mood brilliantly: a wave of the wand, a puff of smoke and Moreira had done what few jockeys have ever done anywhere and what nobody had ever done in Hong Kong. Eight winners on a day.

Four times previously, jockeys had won six – on two of those occasions it was Moreira too – but when Beat the Clock made it six with three good rides still to come, the Sha Tin crowd was buzzing with a sense of something rare and special about to take place. 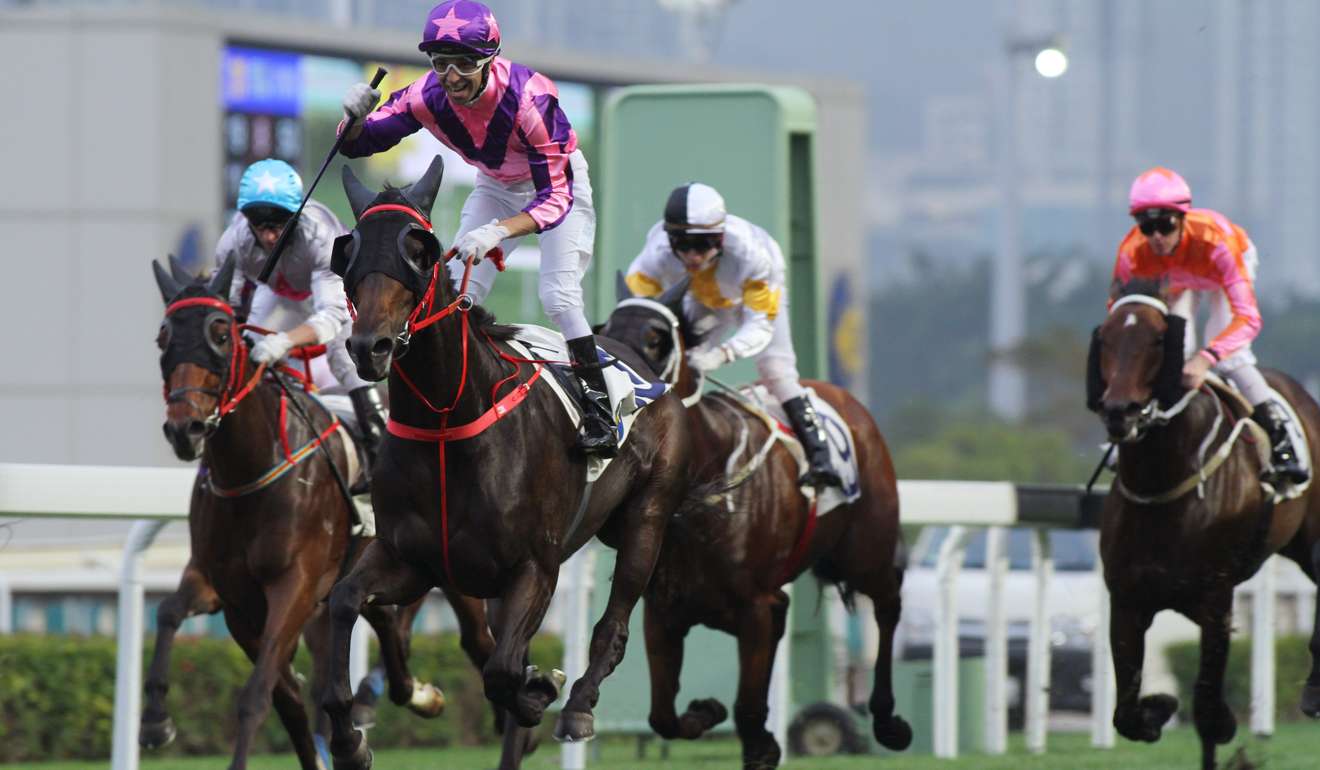 Not that Moreira was entering virgin ground. He had eight winners on a day in Brazil and, in Singapore, won the last eight one day and the opening race the next for nine in a row.

“But I think it is even harder to do in Hong Kong,” said Moreira, who screamed his delight as he brought his last winner back past the Racecourse Gardens apartments near the finish line.

“I was so pumped. And my wife was out on the balcony and screaming out to me, so I screamed back. I so wanted to share that moment with her. You can’t ever expect these things, I have no words to describe it.”

Fellow rider Karis Teetan wasted no time uncorking a bottle of bubbly to douse Moreira before he had even reached the scales to weigh in and make it official.

From 10 rides, Moreira fell short by one of equalling what is believed to be the world record – nine wins on June 4, 2005, by American jockey Eddie Castro at Calder racetrack in Florida.

Moreira’s admirers claim he is the world’s best rider in that unwinnable debate, but he laid out some strong arguments yesterday and a straw poll of trainers couldn’t even agree on what makes him so great.

Joao Moreira puts his eight win performance in perspective, says it is "sharing the top spot" when it comes to his many career achievements pic.twitter.com/N4pYL0vUJY

“He’s got the right frame, he’s beautifully balanced, great hands and really knows the racing here now – he knows where to be and who to follow,” John Moore said.

David Hall reiterated some of those qualities and said Moreira’s knack of getting lower class horses to up their game was a key point. 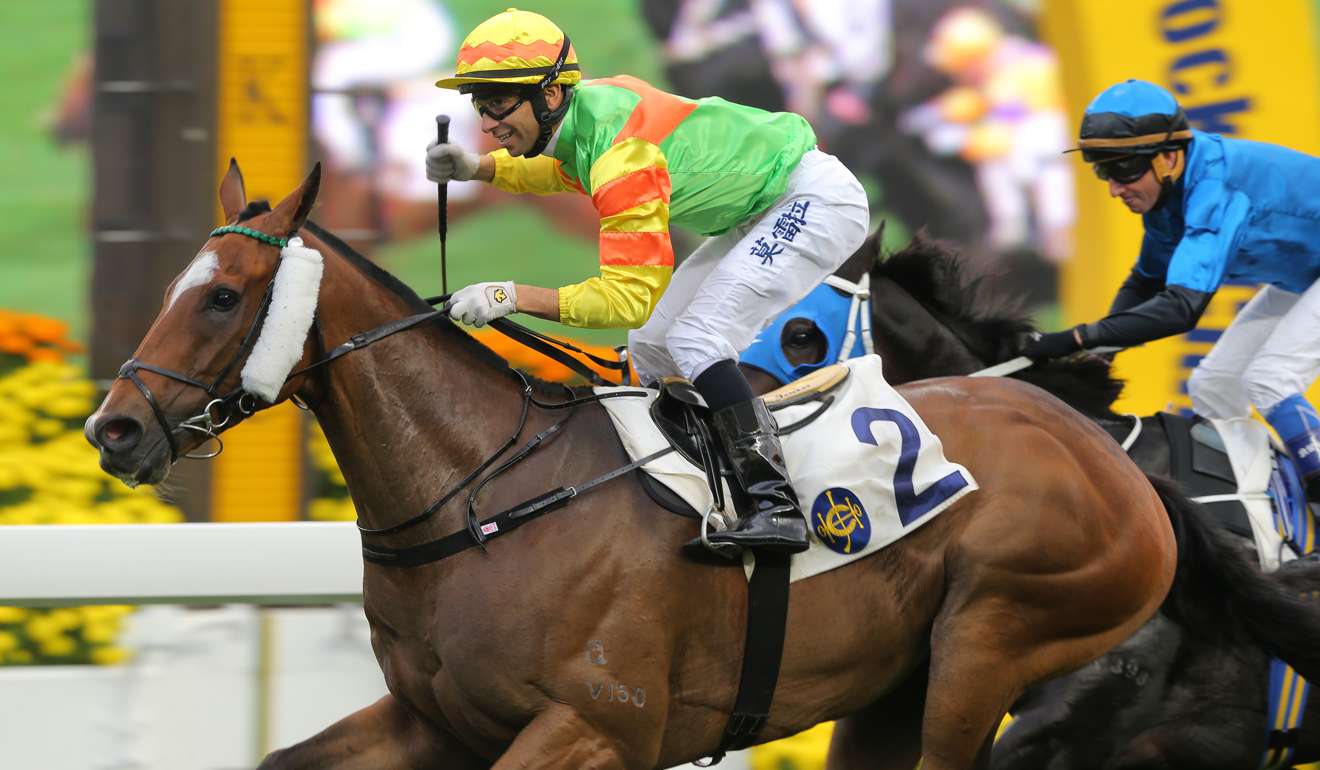 “It’s one of his best assets – you see horses that race in the back half of the field in the lower grades and Joao gets on them and suddenly they are in midfield or the front half of the field and it is the difference between winning and losing for them,” Hall said. “And, on top of his skills, he has a winning personality. Everyone likes him.”

Champion trainer John Size combines with Moreira more often than anyone but confessed he doesn’t have the answer.

“It’s intangible. I don’t profess to understand. All you have to do is look at his record,” he said.

But when the dust cleared and crowd had slipped away, Moreira was happy to give up what he thinks is his secret: “That’s easy – being on a good horse makes me a good jockey.”