Trainer Caspar Fownes (right) is given the run down by Christophe Soumillon after Dundonnell finished second at Meydan last month. Photos: Donald Lee.

It was a mixed bag for Hong Kong’s three-strong Dubai World Cup night team at the barrier draw on Wednesday but the implications of those draws weren’t immediately clear.

The John Size-trained Amazing Kids appeared to get the worst of the news, pulling barrier one in the US$1 million Al Quoz Sprint down the straight course, where higher numbers have been generally favoured in past World Cup meetings, but the race may be different this year moving from 1,000m to 1,200m.

In the US$2 million Golden Shaheen over 1,200m on the dirt, Dundonnell came up with gate four, while Not Listenin’tome has barrier ten.

Trainer Caspar Fownes had nominated a preference for a lower draw beforehand but the downside of that is that Dundonnell will have to race in the very heavy kickback generated on the Meydan dirt, as Fownes-trained flops Gun Pit and Domineer did in 2016. For Not Listenin’tome, the wider draw could mean he avoids the kick back and he is drawn in the section from which a lot of the pace in the race is expected, from My Catch (barrier eight) and St Joe Bay (11).

Wednesday in Dubai dawned crisp but bright and clear and Fownes looked to have pulled the right rein missing the waterlogged trackwork session on Tuesday with Dundonnell.

He, Amazing Kids and Not Listenin’tome weren’t out to break any records but they all appeared at the main trackwork session. 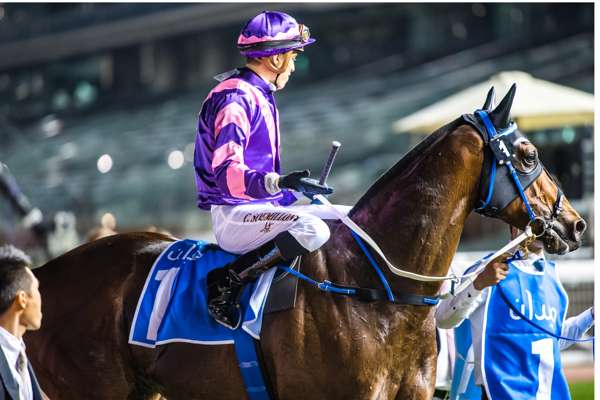 Fownes had intended to send Dundonnell out the day prior but changed tack when pouring rain was the order of the morning and the track was sloppy.

“His fitness was good, he didn’t really need to work so, in the circumstances, I just kept him in the trotting ring and he went around there for half an hour,” said Fownes after presenting the sprinter for work in much better conditions on Wednesday, although there was a change of plans again.

“I was going to jump him out of the gates, but this horse really doesn’t like the barriers and I decided against it. He just went some pace work then home a bit faster to get rid of any cobwebs. Jumping him from the gates for something sharper was the alternative but I would have run the risk of unsettling him. He’s a bit funny, a very quirky horse.”

Fownes concedes Dundonnell is “a big outsider” but says he has been happy with his two starts since arriving in Dubai and at least knows that the quirky horse handles what is also a fairly quirky deep dirt surface.

“He’s been well the whole time here and his runs have been quite good,” he said. “Initially, I was disappointed with the second one but when I examined it more closely on the video, the winner left him behind at the top of the straight and Dundonnell was picking him up again on the line. So it was better than it first looked. I know we’re a big outsider and it’s a tough race but hopefully he’ll bring his best and get into the prizemoney.”

The John Moore-trained Not Listenin’tome will be having his first race on the Meydan dirt although it is his second visit to Dubai after running down the course in the Al Quoz Sprint last year.

As stable spokesman George Moore had indicated on Tuesday, when Not Listenin’tome also stayed in the trotting ring in the quarantine area, he did a lap and a half of the track on Wednesday without being put under any pressure, while Amazing Kids, likewise, was just out to stretch his legs.