The Mauritian Magician got the better of the Magic Man at the city track on Wednesday night, lifting London Master, Fruitful Life and Charity Glory to victory 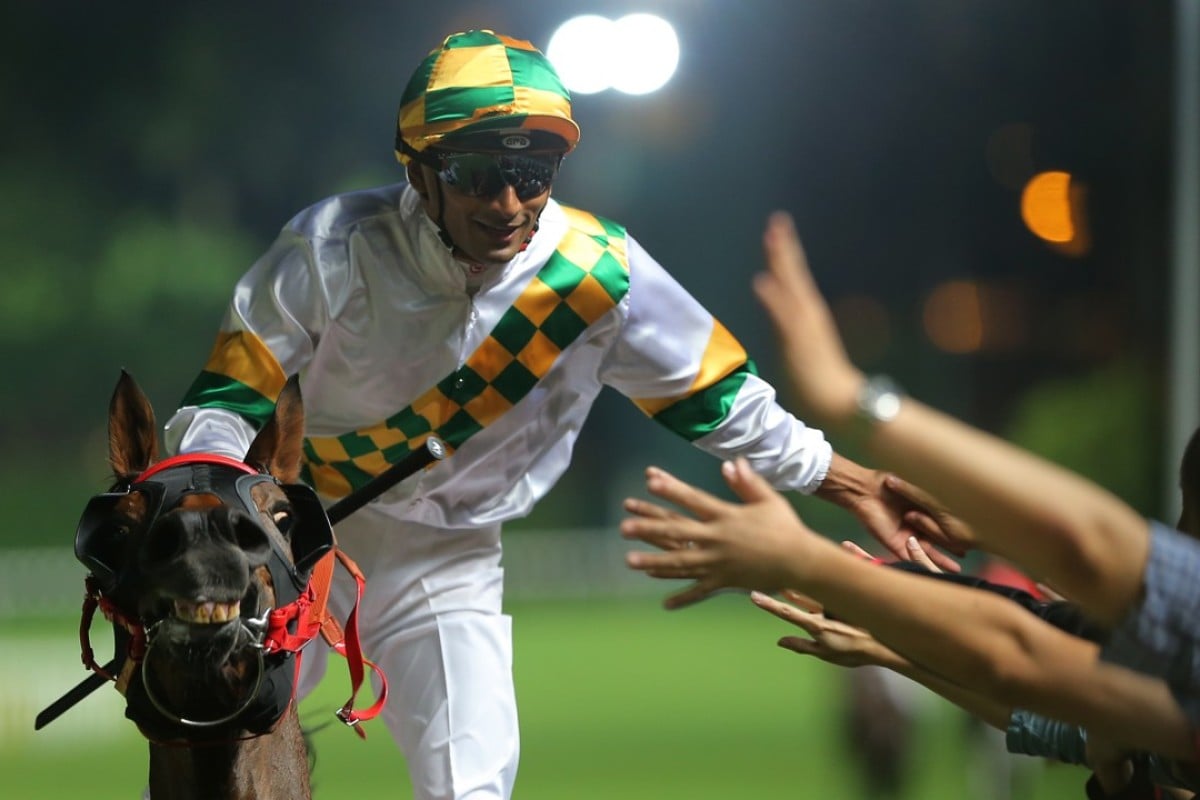 Karis Teetan emerged victorious in the battle of the magicians at Happy Valley on Wednesday night with a winning treble and some might have considered it a four-timer.

Joao “Magic” Moreira was back from suspension with some good horsepower at his disposal but only managed to collect the Wayfoong Centenary Bowl with Wah May Baby for Tony Cruz.

However Teetan, the Mauritian Magician, knocked London Master, Fruitful Life and Charity Glory into the back of the net and must have narrowly escaped a suspension on Megatron in the third race, his reprimand from the stewards virtually a fourth win considering the momentum he has at present.

Teetan already has a ban to start next week and a second would have slowed down his rapid surge into a clear third on the table with 15 wins from the first 14 meetings.

London Master rolled to a big win in R2 for @KarisTeetan and David Ferraris. #HappyWednesdayHK pic.twitter.com/X18kjzhoCm

“Before he couldn’t run any further than 1,000m because he couldn’t breathe, but since the operation he has been perfect,” Ferraris said after the six-year-old made it a second successive win and his first over 1,200m.

Three winners takes him to 15 for the season and in the box seat for a place representing HK at the IJC in December pic.twitter.com/y2WTAPTdO7

Freshman trainer Frankie Lor Fu-chuen was the other star of the night, leading in his first Happy Valley wins as Teetan steered home Fruitful Life and apprentice Jack Wong Ho-nam led throughout on Who Else But You.

“I don’t think I have had many runners at Happy Valley but of course it’s nice to break through here. I think I have been lucky to get Fruitful Life when I did – he has had problems in both knees and needed time but now, as a five-year-old, he is more mature and able to cope,” Lor said.

“He appreciated the 1,800m tonight and I think he will stay further. He’s not fast but he can stay. With Who Else But You, we might have made a mistake last time when I asked Karis to ride him behind. He was field shy in between horses and didn’t give his best. So, tonight, I asked Jack to just let him run and the horse had a lot more confidence. He was well-handicapped to win, he just needed to do his best.” Lor’s debut season has been outstanding, now sharing the lead on the trainers’ table with Chris So Wai-yin on 10 successes.

Nash Rawiller kept up his good run of form, winning the opening Class Five for Peter Ho Leung after scoring for him with Ace King last weekend, and the trainer said removing the hood from the seven-year-old might have sparked the improved run.

“He is probably too good for Class Five but not good enough for Class Four,” Ho said.

Underway at #HappyWednesdayHK for the 3rd of 4 Oktoberfest celebrations. @nashhot gets us off and running, winning on Our Honour pic.twitter.com/J4n06XwHl3

“I think he was getting a bit bored and not trying, so we took the hood off and that seemed to work. We had the right jockey on to wake him up as well. He rode him exactly how we wanted – I said that he will begin well, but don’t use him early, and hold on to him for as long as you can because he only has a short sprint.”

Zac Purton left his run until the second half, scoring with short-priced favourite Generous Heart in the fifth for Dennis Yip Chor-hong then bucking the trend with the Caspar Fownes-trained Gonna Run in the last.

All winners had come down the centre of the track in the home straight but Purton took Gonna Run through closer to the inside rail and suffered no ill effects.

“He is just a good, honest Hong Kong horse. He always runs you a good race, even if he isn’t winning he still runs a good sectional,” Fownes said.