The grey wins his third race from his past four starts by taking out the Chevalier Cup, forming part of a treble for jockey Karis Teetan 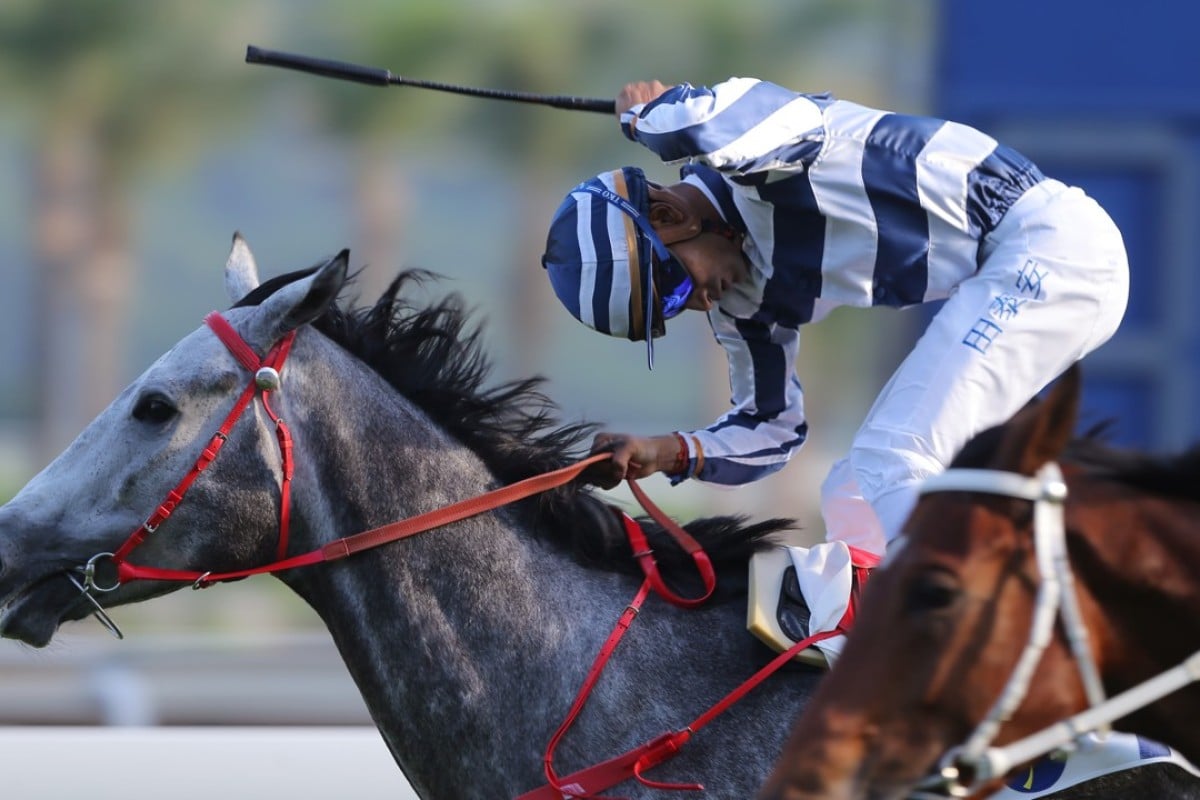 Trainer Peter Ho Leung might surprise by targeting the top milers in the Group One Stewards’ Cup with Fifty Fifty in the new year, despite the natty grey only graduating to Class One in the Chevalier Cup yesterday.

“He is a headache for me because I don’t want him to carry too much weight in his races,” Ho explained after the half-length victory over fast-finishing Exultant.

“The only way to stop that is to keep going up in class so we’ll have a look at the programme but I might enter him for the Group One. He’s a nice horse and I’d rather put him in against the good horses than for him to have to carry big weights.”

There is still some racing to do between now and then but the Stewards’ Cup at level weights with horses rated more than 20 points higher than Fifty Fifty – rated 91 on Sunday – would be a big step.

Having his first try at 1,600m, Fifty Fifty again lived up to expectations to win for the third time in four starts this season and Ho said the extra distance was not a concern, on Sunday or in the future.

“I’m sure he will run even further than 1,600m. He is a horse who just relaxes – you see today, even when the pace slowed up in one section, he settled. It didn’t upset him and he still had his acceleration at the finish,” Ho said.

Fifty Fifty didn’t just land jockey Karis Teetan the first leg of a winning treble, he also clocked up what surely is a record – a third careless riding ban this season on the same horse and in just four starts.

Stewards took a dim view of Teetan’s role in an incident when the lead slowed sharply and Booming Delight suffered interference but the Mauritian, just back yesterday from two weeks’ worth of careless riding suspensions, was visibly disappointed by the fresh ban. “With the other ones I could see what they meant but I was disappointed with this one and I may look at appealing – the pace slowed suddenly and there was nothing I could do,” said Teetan, who was visibly disappointed despite his winning treble and a burgeoning association with Fifty Fifty.

“He still feels like a big baby underneath me. I was never worried about the extra distance today because, when Fifty Fifty gets behind other horses, he just falls asleep. After his last time, when he got stuck behind some slow ones, Peter just wanted me to let the horse enjoy himself but be sure to get clear room.”

There is a lot to like about undefeated Conte: John Size

The Tony Cruz-trained Exultant (Matthew Chadwick) had been good in his first run in Hong Kong over 1,400m and enjoyed the extra 200m this time to run home from last into second and probably just needed more speed on.

“I expected Exultant to win today but maybe it’s come a bit early for him,” Cruz said. “But he’ll run further than 1,600m, he’ll run 2,000m no problem, but he will run in the Classic Mile in January. We have to go that way with him.”

Morethanlucky gives both Frankie Lor and @KarisTeetan their 23th wins of the season, the latter bagging a treble today. #HKracing pic.twitter.com/bJXb3RGGJh

Teetan’s other winners were Premiere for John Size and Morethanlucky for Frankie Lor Fu-chuen, with the rider completing three wins on Morethanlucky too.

“He’s really an up and coming horse,” he said. “Frankie has done the trick with him and, even though I’d already won on him, I felt he was like a different horse when I trialled him the other day. He has really turned the corner.”