Richard Gibson celebrated his 49th birthday in style at Happy Valley on Wednesday night, collecting a double as he notched his first winners of the season.

Gibson had been knocking on the door with three seconds in the first three meetings, but he got on the board as Faithful Trinity and Right Honourable prevailed.

While the brace was a good result, it could have been a massive night if All You Need and Victory Power ran up to their market prices.

“When the draws came out we always knew we had a good card tonight,” Gibson said. “Some ran good and some disappointed us – it’s called Happy Valley racing.”

Only four meetings into the Hong Kong season and Friends Of Ka Ying already has two narrow seconds to his name this term. This time, it was Faithful Trinity and @mattLchadwixk who prevailed, giving the rider a double from three races at Happy Valley #HKRacing #HappyWednesdayHK pic.twitter.com/nWsqWCp98j

Faithful Trinity, who won a Group Two in Italy before moving to Hong Kong, settled second in the Class Three Oi Man Handicap (1,650m) under Matthew Chadwick before holding off Friends Of Ka Ying in the run to the line.

“Faithful Trinity was always going to be nailed on for an 1,800m race, but we rolled the dice first-up over a mile,” the trainer said. “I would expect him to win again over 1,800m.”

Right Honourable landed his second Hong Kong victory thanks to a top ride from champion jockey Zac Purton and Gibson paid tribute to the late Nick Columb, the Jockey Club’s international bloodstock agent who died after suffering a stroke on holiday in Spain last month.

Right Honourable comes with a deft turn of foot to take the fifth at Happy Valley, giving trainer Richard Gibson a double and @zpurton a first for the night #HKRacing #HappyWednesdayHK pic.twitter.com/z1UWJfjwlf

“The first person I thought of was Nick Columb,” Gibson said. “Number one, because he loved Happy Valley and number two, because he bought this horse, so I pay my respects to Nick.

“Nick’s left a big hole in Hong Kong racing culture, he was here for a short time but he made a big imprint.”

The other trainer to enjoy a double was Ricky Yiu Poon-fai, with Mickey Rich and Keep Moving both saluting.

Mickey Rich provided Neil Callan with his first winner of the season, nosing out the unlucky Travel Successor, while Keep Moving recorded his fifth win from 10 starts thanks to the work of 10-pound claimer Victor Wong Chun.

“He goes well fresh, we had the right run and the claim helped,” Yiu said of Keep Moving. “He’s a gutsy horse and hopefully he can make the step up to Class Two.”

Chris So Wai-yin was relieved Eighty Eighty (Purton) got the chocolates after a tough run of seconds for the stable.

Before the Class Three Community Chest Cup (1,000m), So had registered one win and six seconds from 21 runners.

It's a double for @zpurton as Eighty Eighty wins the seventh at Happy Valley for trainer Chris So #HKRacing pic.twitter.com/WLnErYnpGA

“We’ve had a lot of seconds this year, the horses are running well and just missing out, but that’s the game,” So said. “We’ve got to keep looking forward, working hard and the winners should come.

“Eighty Eighty is not a really outstanding horse but he’s consistent, he’s always there. We had a good draw and a good jockey and it worked out.”

Jimmy Ting Koon-ho is really building a name for himself as a first race specialist, taking out the Class Five Cheung Hong Handicap (1,800m) with Holy Unicorn.

The rookie trainer has now claimed the opener at three of the four meetings this season and was aided this time by a peach of a ride from Matthew Chadwick, who controlled the race from the front.

Holy Unicorn breaks through at his 28th start and he does so in style, winning impressively under @mattLchadwixk to give Jimmy Ting his fourth win of the term #HKRacing pic.twitter.com/gvwxcw1rxy

“My horses are all Class Five horses – that’s why I’m having success in race one,” Ting said with a laugh.

“He is a one-paced horse, he can’t come from behind, you just have to keep going on him. We’ll try and find another 1,800m race for him now.”

David Ferraris recorded his first victory of the season as Ambitious Heart (Alberto Sanna) cruised to an easy win in the fourth race while the Tony Cruz-trained Circuit Glory took out the Class Two Wah Fu Handicap (1,650m) to finish the night.

Meanwhile, Douglas Whyte was the only jockey to earn the wrath of stewards, outed for two meetings for his ride on Limitless. 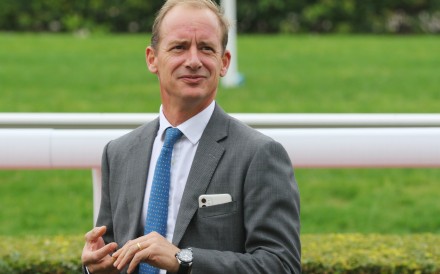