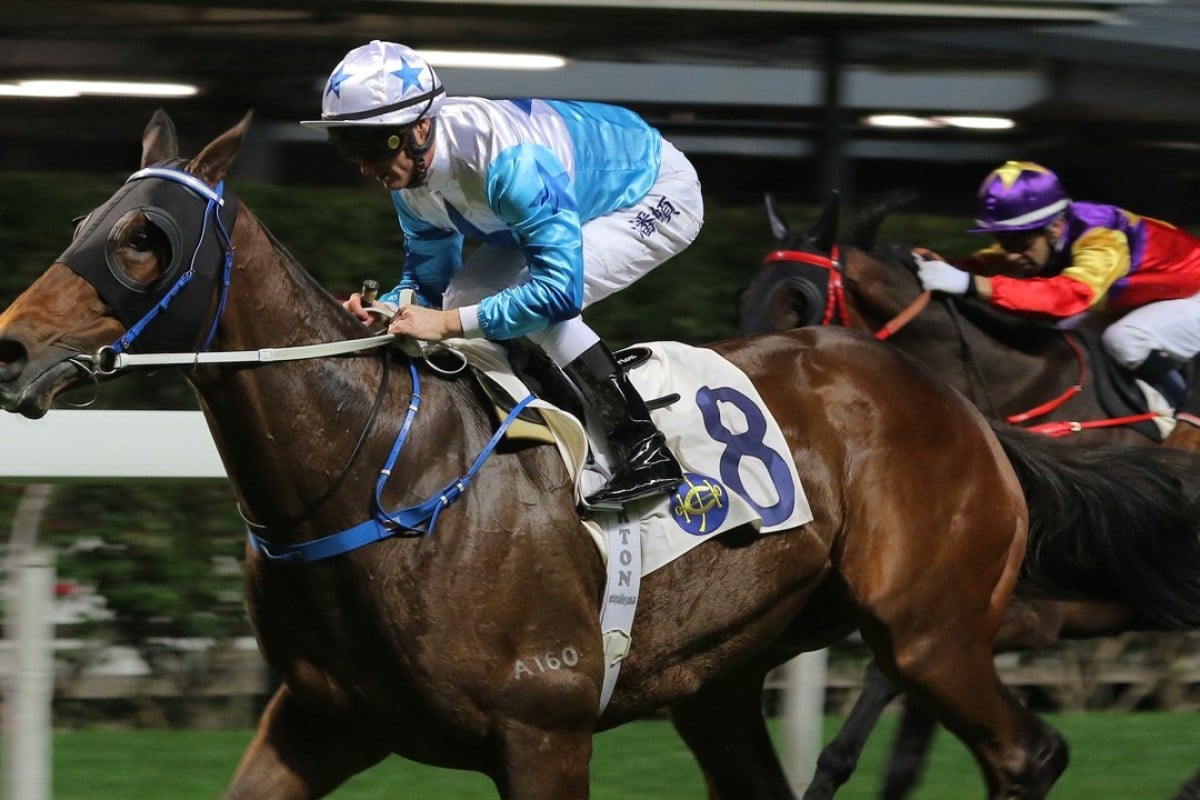 Caspar Fownes’ Smart Baby continued his excellent form, ringing up a third straight win, while his jockey Zac Purton racked up a hat-trick of his own as everyone fought through a Longines Hong Kong International Races hangover at Happy Valley on Wednesday night.

After celebrating a local sweep at Sha Tin on Sunday, the biggest day of the season, it was hard for anyone to get really excited about your standard midweek fare, but Purton, fresh off two Group One wins, continued his excellent form to collect a treble.

The first was with the Richard Gibson-trained Kwaichung Brothers, the second with Applause, his maiden win for rookie trainer Jimmy Ting Koon-ho, while he completed the haul with Smart Baby in the Class Four Mesia Handicap (1,800m).

After battling through his first two Hong Kong campaigns, the five-year-old Smart Baby has found his groove, rattling off three straight Valley victories in less than a month.

Trebles all round! @zpurton makes it three on the night and Smart Baby makes it three on the run for Caspar Fownes with a perfectly-timed outside drive in R5 at the Valley. The champ's lead over @KarisTeetan stretches to eight, the widest of the season so far. #HKracing pic.twitter.com/Iz5wm0W5Xa

“He’s just taken time,” Fownes said. “He obviously came here with a couple of decent runs in the UK but like anything, he was a bit sore, this and that, and he got to a mark where he was able to win in Class Five.

“He took a bit of confidence from that, it was a nice ride by Chad [Schofield] the other day, and then he’s come out tonight with Zac and it’s worked out well.

“He’s going to remain in the grade so hopefully he can snag one more, we’ve already done our job so you’ve just got to hope they pull up well and stay sound, that’s the key now.” Fownes said Southern Legend, who finished third in the Hong Kong Mile, pulled up well and now he is assessing his future options.

“There’s a chance he might go to Dubai, we’ll look at the Hong Kong programme,” Fownes said. “I’d like to not keep clashing with Beauty Generation so I might have to step him up in trip to avoid that and see if that works.

“He’s still strong at the end of a mile so if I train him up and give him a chance for a race like the Hong Kong Gold Cup, that might be worth a look at.”

Fresh off the biggest meeting of his career, it was business as usual for Frankie Lor Fu-chuen at the Valley, collecting a winner with Speed Vision.

The three-year-old is unlikely to rise to the Group One heights of Mr Stunning or Glorious Forever, but the trainer was delighted to get a win with the gelding, who had struggled to find his best in his first three runs of the term.

Frankie Lor's pre-race orders to Victor Wong before R6 were "jump good and use the draw." The youngster carried out the plan to perfection from stall 1 aboard Speed Vision, who went all the way for his second Hong Kong success. #HKracing pic.twitter.com/fjbLoV6Ojw

“He had a good draw, light weight and I asked [Victor Wong Chun] to make sure he jumped well and then hold his position,” Lor said. “He was a bit disappointing early in the season, so that’s why I tried Happy Valley.”

Lor said he didn’t get caught up celebrating his first Group Ones on Sunday night, getting his typical five hours of shut-eye.

“I still needed to work, so I was there at 5am – I had the normal amount of sleep,” he laughed.

The win was the first of a running double for Wong, the apprentice then combining with Me Tsui Yu-sak to lift Telecom Brothers to back-to-back wins.

Different tactics for Victor Wong in R7 but the outcome is the same as Telecom Brothers stalks and pounces to follow up a recent C&D success. Wong is ticking over nicely with 15 wins on the board in just his second season #HKracing pic.twitter.com/WHHmhS6jSM

Peter Ho Leung’s Dances With Dragon, who won the 2017 Group One Levin Classic in New Zealand, captured his first Hong Kong victory by running over the top of his rivals in the eighth event.

“Hong Kong is so different, he came here as a colt and he would play up, that’s why we gave him the cut,” Ho said.

“After the operation he needed two or three months and then gradually he improved, up to today. He can go further again, he will really like 1,800 to 2,000m.”

It's Lucky 13th run in Hong Kong for Dances With Dragon: The ex-Kiwi galloper has progressed since joining Peter Ho and responds generously for @DJWhyteJockey to collar My Ally in the Valley finale #HKracing pic.twitter.com/uJESwJOB5H

The upset of the night came from Manfred Man Ka-leung’s Spinning Dancer, the veteran collecting the Class Five Frigatebird Handicap (1,650m) at a juicy 48-1.

Vincent Ho's fine season continues as he moves on to 19 winners - clear third in the table - with a 48-1 success aboard Spinning Dancer in R3. Manfred Man's gelding now has four Hong Kong wins but this was his first since February 2017 #HKracing pic.twitter.com/E82artSZed