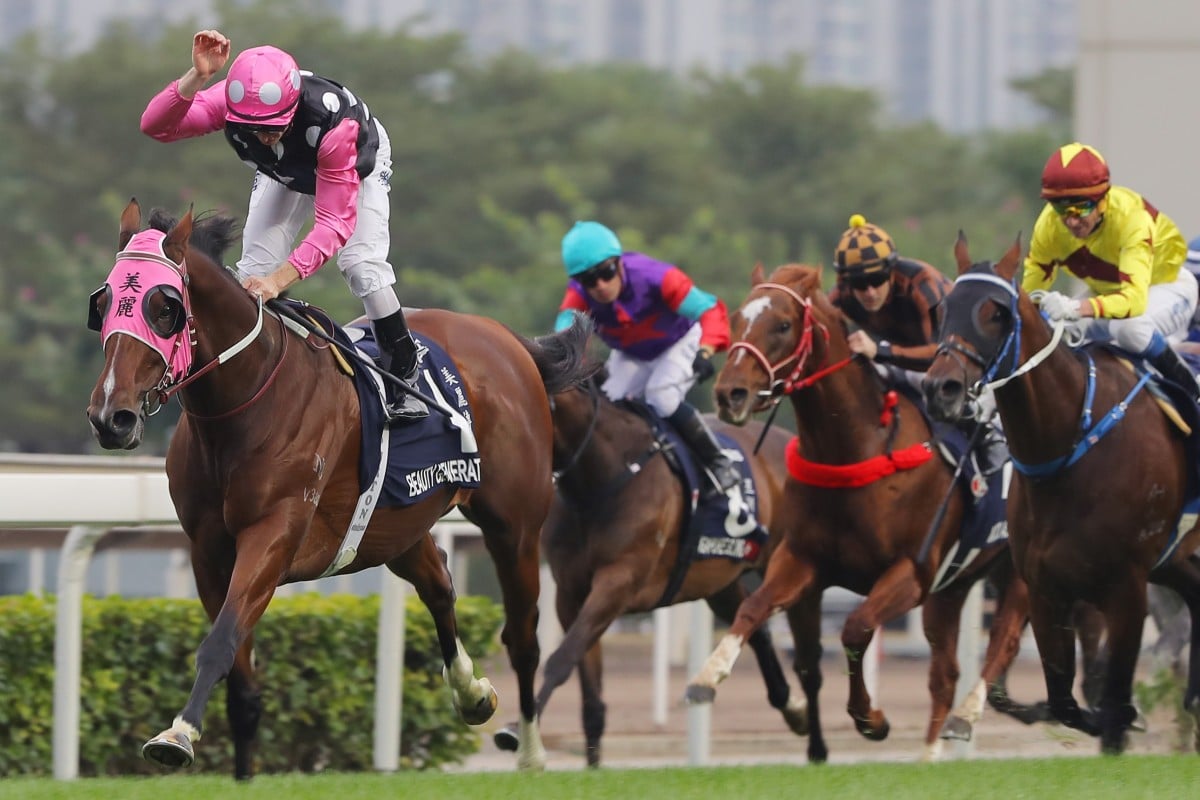 Zac Purton gives Beauty Generation a big pat as he runs away with the 2018 Hong Kong Mile. Photo: Kenneth Chan

Beauty Generation is chasing Good Ba Ba’s record of three-straight victories in the Longines Hong Kong Mile, but the air of invincibility that surrounded him is gone and six internationals are trying to snatch the title.

After his stunning winning streak was snapped at 10 last month, the two-time Horse of the Year has now suffered back-to-back defeats, making him more vulnerable than he has been at any time in the past 18 months.

But don’t dismiss his chances – he’s still the highest-rated horse at the meeting and anywhere near his best could blow his rivals away.

In-form Japanese star Indy Champ presents arguably the biggest challenge, with Group One victories in the Yasuda Kinen and last weekend’s Mile Championship marking him as a genuine top-liner.

His compatriot, three-year-old colt Admire Mars, also boasts two Group One wins over a mile to his credit and is another on the rise while the filly Normcore comes into the race off back-to-back wins in Tokyo, including the Group One Victoria Mile.

The Japanese assault rounds out at four with Persian Knight, who finished fifth in last year’s Hong Kong Mile.

Aidan O’Brien’s globetrotting colt Circus Maximus is another with the ability to win.

The three-year-old has competed at Group One level in his past six starts – competing in England, France and the USA – winning both the St James’s Palace Stakes and the Prix du Moulin.

Sir Michael Stoute’s Zaaki completes the list of internationals and while he doesn’t have the elite form of some of his rivals, he did win the Group Three Strensall Stakes at York two starts back and ran third to Benbatl at Group Two level in September.

From a local perspective, just five Hong Kong horses are lining up.

Aside from Beauty Generation, John Size’s Waikuku looks the best credentialed, having beaten the champ in his past two starts. He looks a top-quality horse on the rise and can take another step forward after winning the Group Two Jockey Club Cup.

Tony Cruz’s Ka Ying Star will be prominent again – the other who beat John Moore’s seven-time Group One winner last time out – while Simply Brilliant and Citron Spirit are always honest but probably lack the requisite amount of class.