Yoshihiro Hatakeyama had the Group One Longines Hong Kong Cup (2,000m) in his sights from the moment Win Bright crossed the line to take out April’s QE II Cup and the trainer has issued a warning to those considering writing the horse off again.

Win Bright was a $48 chance when delivering a withering burst to win the QE II in track-record time and Hatakeyama says the horse is every chance to provide Japan with its third Cup win in five years.

“He’s in top condition right now, the same as in April, so I’m very confident going into the race,” he said of Win Bright, who was the only horse to finish ahead of Exultant in a Group One last season.

Win Bright comes into the race on the back of a distant eighth behind Almond Eye in the Group One Tenno Sho Autumn (2,000m) but Hatakeyama is confident his charge is ready to peak third-up after beginning his campaign with a ninth at Group Two level in September.

“His last two runs were not satisfactory performances but he doesn’t really perform well first-up and second-up after a break. He is now improving his condition,” he said.

Almond Eye was in the Cup field until last weekend, when she was withdrawn with an elevated temperature, however Hatakeyama said he wasn’t fussed whether the darling of Japanese racing was in the field or not.

Preferring to focus on his galloper, the trainer said Win Bright is now an old hand at making the trip to Sha Tin.

“He has settled in very well because this is his second time to come over here,” he said. “He has been doing very well. The temperature here in Hong Kong suits him well.”

It’s also only the second time Hatakeyama has brought a horse to Hong Kong and he will have to overcome hometown hopes Furore and Rise High and in-form Aidan O’Brien raider Magic Wand to maintain his perfect record. 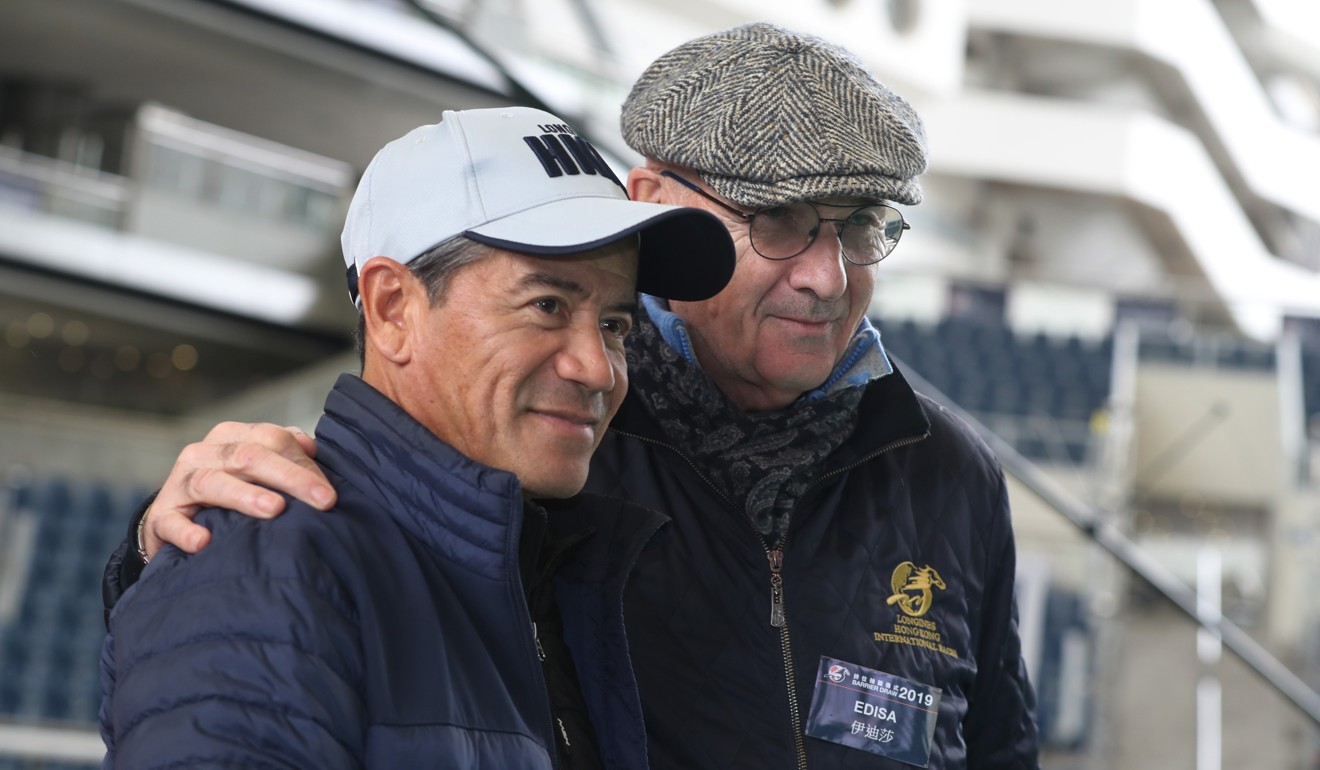 De Royer-Dupre back with another flying French filly

Another intriguing raider in the Hong Kong Cup is the Alain de Royer-Dupre-trained Edisa, a three-year-old filly who demands recognition not so much for her form but because of the French handler’s record of travelling horses.

De Royer-Dupre took out the Cup in 2006 with Pride and the 2009 Vase with another filly in Daryakana and although he’s not sure Edisa has the same quality as that pair, he is confident she will take to Hong Kong with aplomb.

“I’m very happy to come back. I’ve come with top, top fillies and this year I have a good filly, not a top one,” he said matter of factly.

“But I had a good feeling about coming because she did very well in America on a quick track and I think she will be able to adapt to the Hong Kong track.”

That trip to America was for the Jockey Club Oaks Invitational Stakes in September, with Edisa winning nicely at Belmont Park before returning to France and running second in a Group Two at Longchamp last time out.

The galloper has had seven starts in 2019 and De Royer-Dupre has watched her grow.

“She has improved all through the season and she is definitely stronger than she was at the beginning,” he said, adding that Edisa has settled in well at Sha Tin. “The filly has adapted very well, she travelled excellently.”

Edisa, who is owned by the Aga Khan, will be the highly regarded handler’s 21st HKIR runner and he hopes to lean on that experience come Sunday.

“When you come to a place like Hong Kong, if you come many times you know exactly what you have to do,” he said. 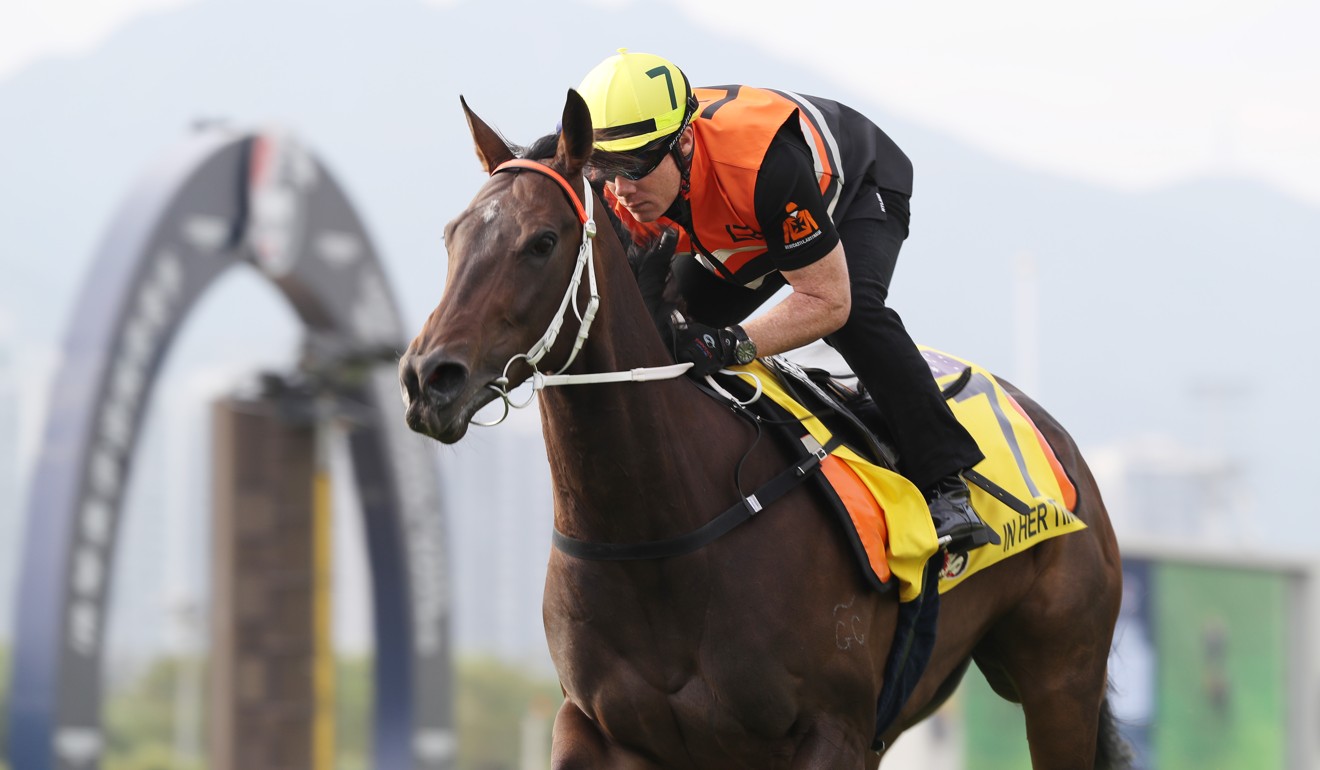 In Her Time is somewhat of a forgotten runner in a hot Hong Kong Sprint but trainer Kris Lees has no doubt about the form his mare brings into the race after tackling Australia’s best speedsters.

The seven-year-old went first-up into the Everest in October, finishing four lengths behind Yes Yes Yes in ninth, before sticking on for third in the VRC Sprint Classic last time out.

“They certainly look a good crop of sprinters [in Hong Kong] but I think she is coming out of two of the top sprint races you will find in the world this year,” Lees said.

“I think they will measure up anywhere, those two races she’s been in, and I think she will run up to her best.

All honours to Nature Strip.

He has made some very talented sprinters look very ordinary. pic.twitter.com/qGE6Uu0oCD

“She didn’t have the best of runs in the Everest, she got shunted wide before the corner and it probably took a bit of sting out of her late. She reacted well down the straight but couldn’t catch the leader.

“But she’s bounced out of it and it was always the plan to get her here on the up and I feel she is.”

Lees couldn’t fault the condition of In Her Time, who worked strongly on Friday morning.

“She’s settled in well, she’s a pretty seasoned traveller – she’s had four trips to Melbourne and a trip to Queensland so she handles it pretty well,” he said.

Lees has only had one previous Hong Kong runner in Lucia Valentina – who ran fifth in the 2015 Hong Kong Cup – but he is no stranger to celebrating success at Sha Tin.

The 48-year-old trained Hong Kong Derby winner Furore before the horse was sold to Hong Kong and was on track to watch his former galloper salute in the prestigious four-year-old race in March.

“That was a great thrill but this would be different altogether,” he said. 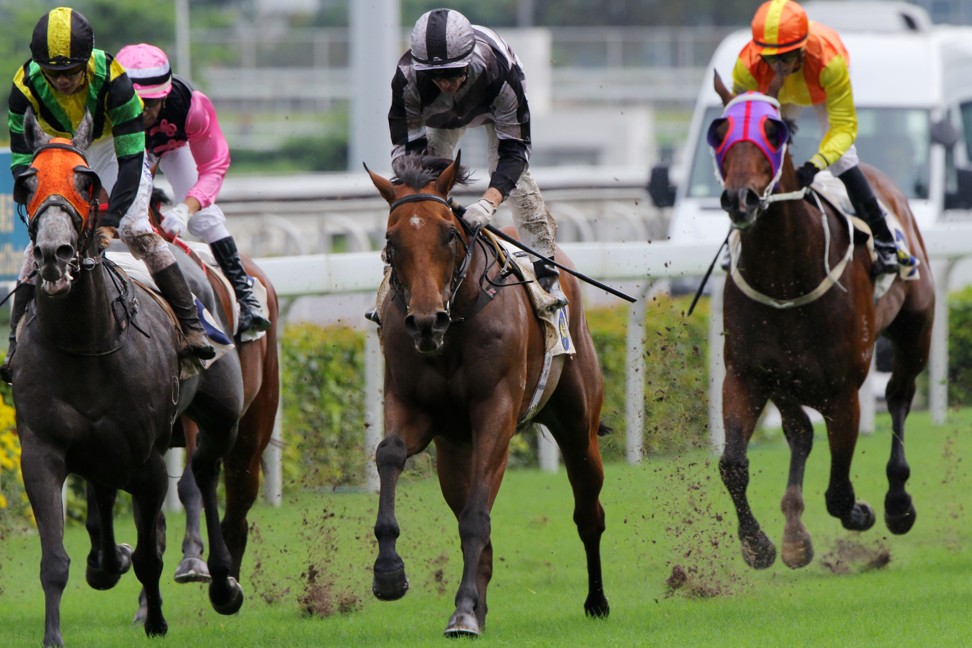 The David Hall-trained Little Giant has been scratched from the Hong Kong Sprint due to a lame left fore.

The seven-year-old has long battled soundness issues and will not get the chance to improve on his fourth in the race 12 months ago.

Meanwhile, Hong Kong Vase pair Lucky Lilac and Called To The Bar are fighting to be fit for Sunday’s race.

Both horses were found to be lame on Tuesday and there was no change in their condition on Friday morning, meaning they will be closely monitored ahead of another update on their fitness on Saturday.