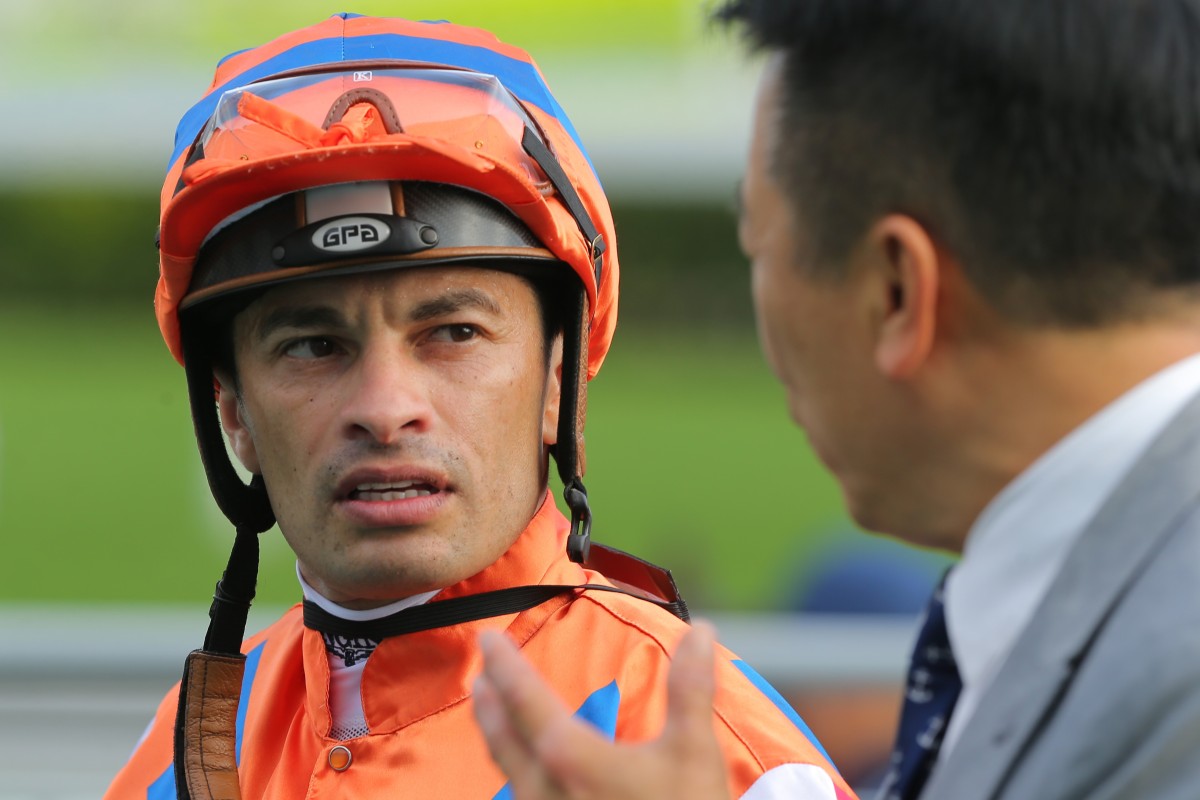 Gun jockey Silvestre de Sousa will trade Sha Tin for Wolverhampton in the space of 36 hours with the Brazilian flying straight back to England to fulfil his retainer contract with King Power Racing.

While De Sousa finished his last meeting in Hong Kong on Sunday after he stayed back to ride John Moore’s Enjoying in what was a Derby trial, there is no time off on the horizon.

De Sousa will ride the Richard Hannon-trained Fox Power on Monday in Wolverhampton, before making a flying visit to Dubai to ride there over the weekend. He also hopes to ride in Saudi Arabia in the upcoming Cup meeting. 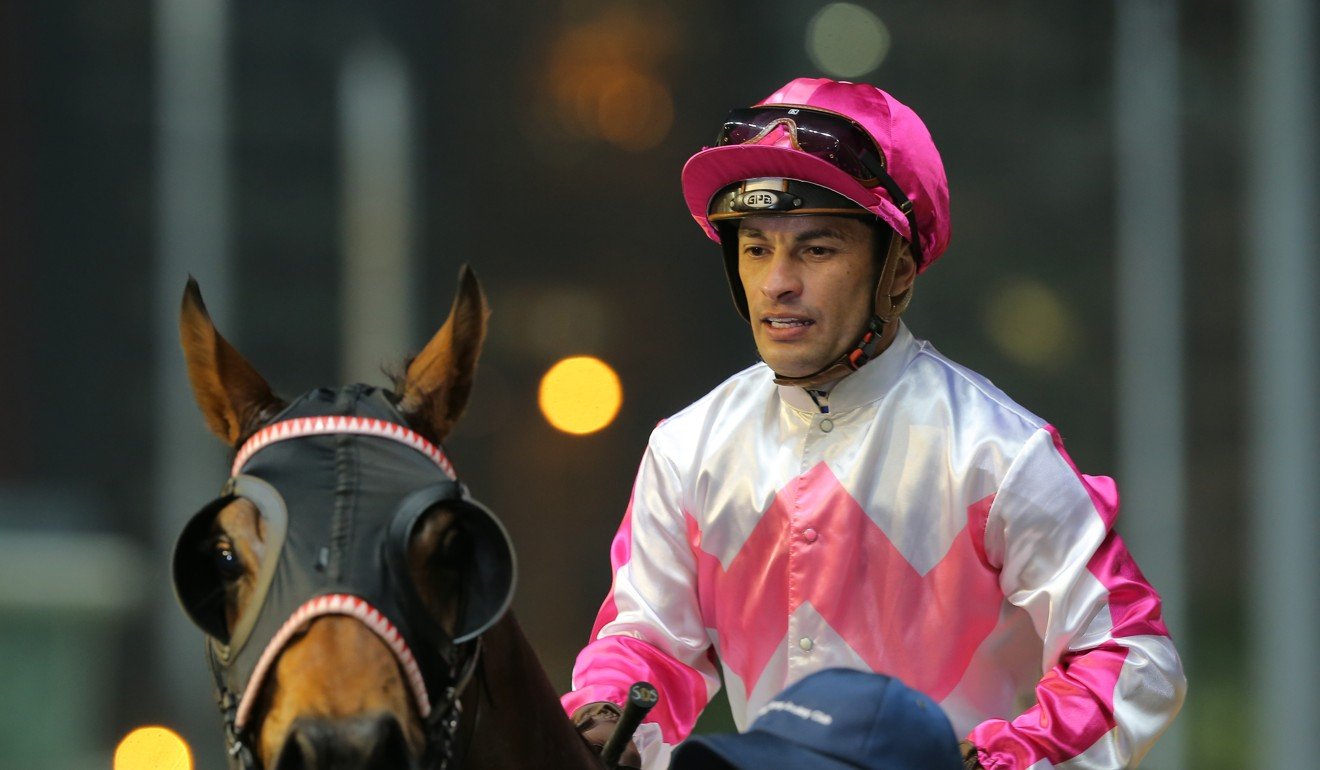 “I am riding tomorrow at Wolverhampton, I have one for my boss there, then I am going to Dubai on Thursday to keep it ticking over heading into the summer,” he told The Post.

“I will be in and out of Dubai, then I hope to go over to Saudi at some point.”

Joao Moreira says title, not numbers, is all that matters this season

After extending his contract by one meeting to ride Enjoying on Sunday, De Sousa found nothing but backsides in the straight with the four-year-old never getting a clear shot at his rivals before finishing a luckless ninth.

Even with the poor showing, De Sousa said he believed the horse still had the ability to feature in the Derby come March.

“I was very unlucky on [Enjoying] today – I hope to come back for the Derby,” he said.

“I will probably come back for him because I think he has a good chance of finishing in the money.”

In what was an interrupted short-term stint due to overseas riding obligations, De Sousa managed 14 winners from 141 rides.

Last season the 39-year-old finished with 44 winners from 298 rides, which included the International Jockeys’ Championship at Happy Valley and the Group One Hong Kong Cup on Glorious Forever.

While he was unable to reach those lofty heights this time around, De Sousa said he was still happy with how this stint panned out. 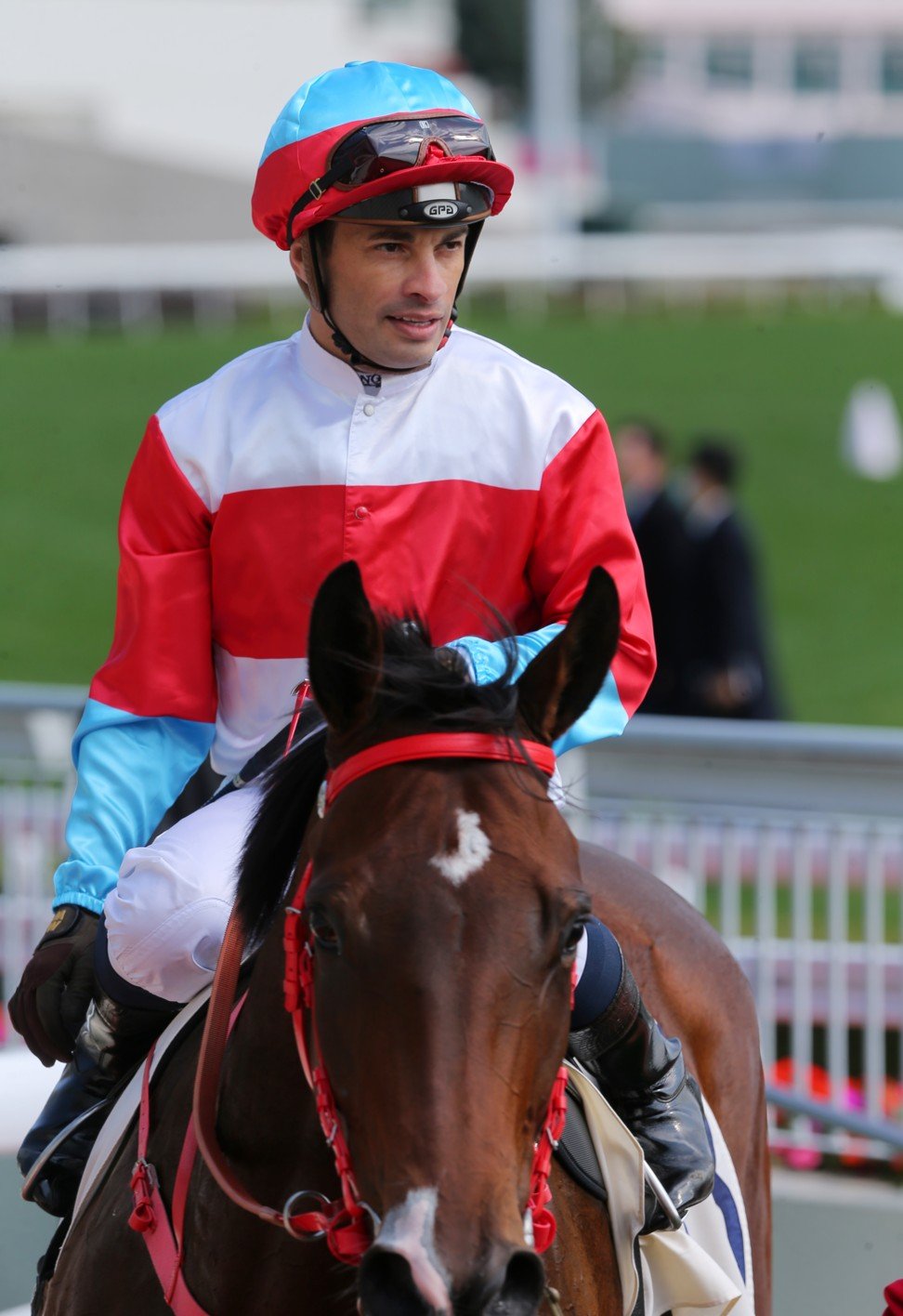 “It wasn’t bad this time, I had a couple of nice horses who managed to give me a few winners,” he said.

“All in all it has been a good stint, just a short one this time, not as long as the last time I was here but I have enjoyed it.”

De Sousa’s departure leaves a gaping hole in the jockeys’ roster with the Brazilian a favourite among trainers and owners for his ability to ride at the bottom of the weights.

The coronavirus is making its presence felt at the Jockey Club with turnover plummeting for the third time in as many meetings.

Tote betting was down more than HK$300 million at Sha Tin on Sunday with punters locked out at the gates in an attempt to minimise the spread of the deadly virus.

With only owners and those with prior bookings allowed on course, just 5,916 punters turned up across the two tracks, compared to the 25,841 for the same meeting last year. 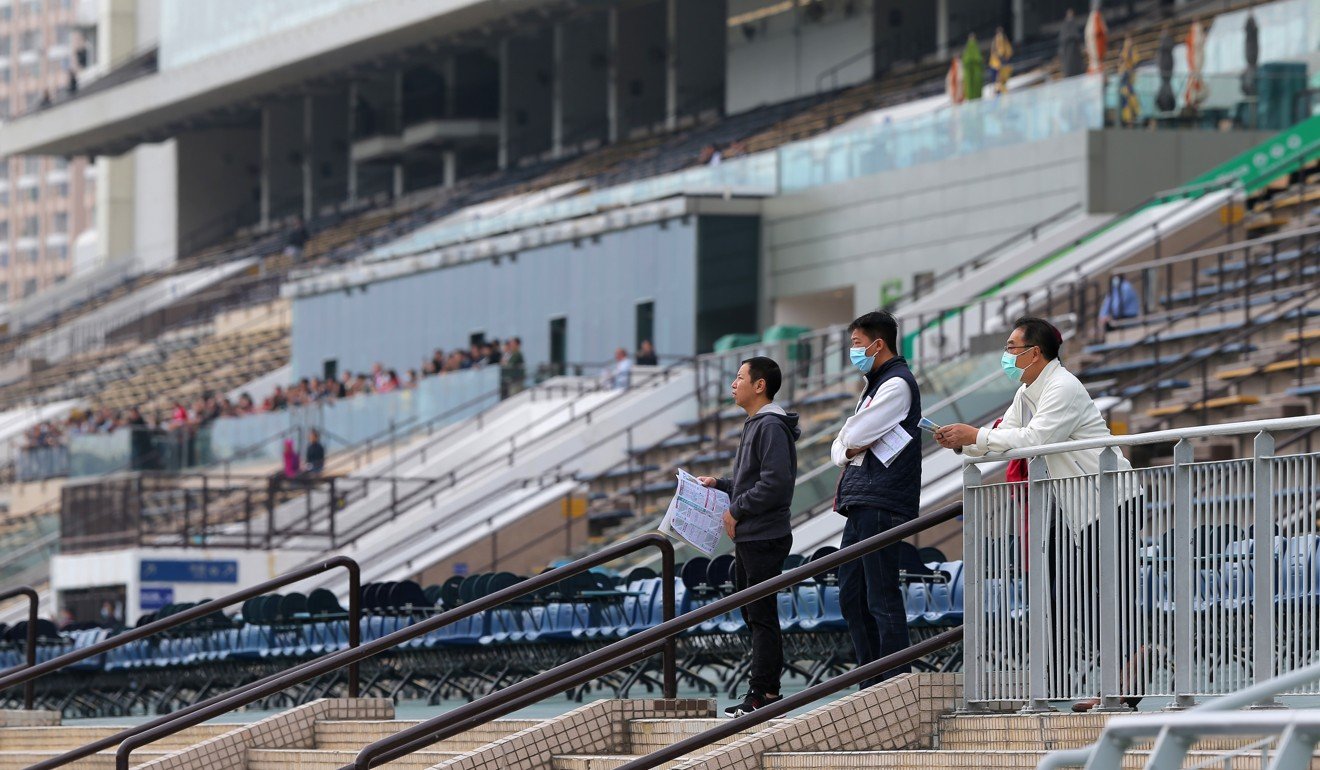 In total, turnover has been down HK$850 million over the last three meetings and it is a trend that looks set to continue for the foreseeable future.

As a result, Jockey Club contributions to the Hong Kong government have been down by around HK$15 million a meeting.

The Hong Kong career of the Tony Cruz-trained Savvy Six is nearing the end after the difficult six-year-old refused to enter the racetrack on Sunday.

The German import is a known rogue and has caused trouble previously, leaving chief steward Kim Kelly with no option but to bar him from racing until he is able to complete three consecutive parade ring tests.

However, it is expected that Cruz will recommend to owners that the horse be retired. 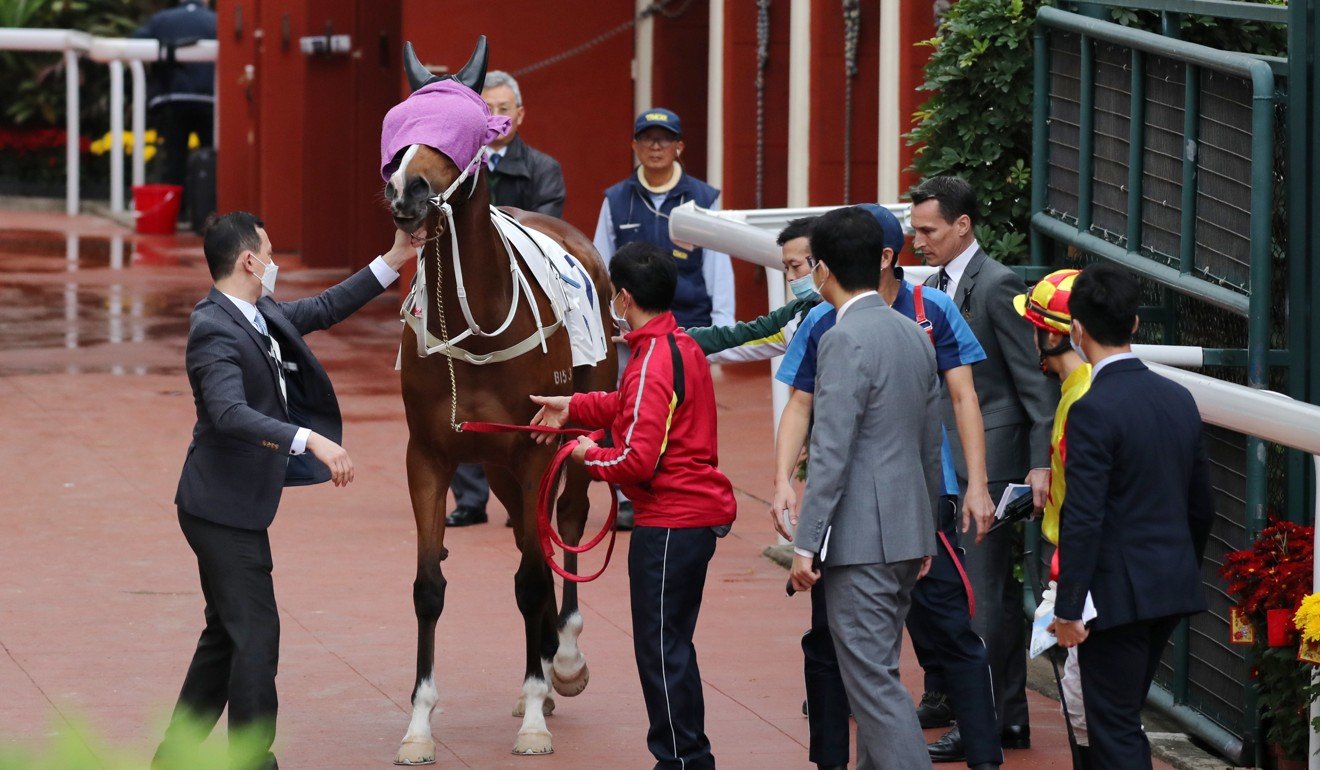 Chris So Wai-yin’s Smart Charade was another horse not to compete on Sunday after he took no part in the Class Four Orchid Handicap (1,200m).

The six-year-old reared as the gates opened and hit his head on the barriers, leaving jockey Tony Piccone with no choice but to withdraw him from the contest.

While there was an inquiry into whether the horse should be declared a non-runner, stewards decided the horse was afforded a fair start.

Douglas Whyte admits he left Sha Tin scratching his head over the performance of his odds-on favourite Wayfoong Star on Sunday.

The four-year-old finished 10th after a torrid trip under jockey Karis Teetan and left more questions than answers for Whyte.

“I am going home scratching my head, he was very disappointing. He has shown the quality of a nice horse and he should be right up with those horses at the moment,” he said.

“He is showing real rawness and greenness in everything he does, you’d like him to get an inside gate so he can get a suck into it. He has been very disappointing to say the least.” 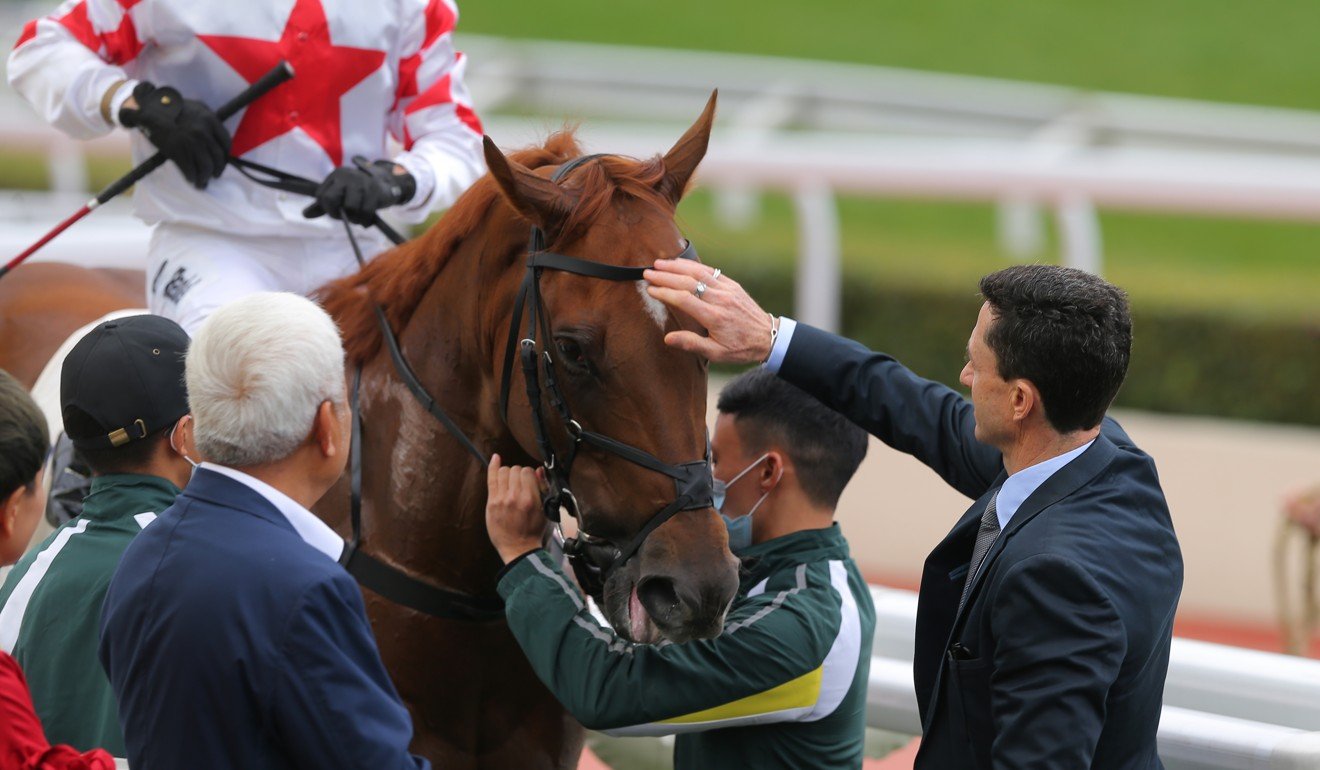 While Whyte’s day was off to a bad start with Wayfoong Star, it improved greatly after Inner Flame won his third-straight race.

The four-year-old remained undefeated with the gritty performance which saw him rally after being headed in the straight.

“He had the chips down, there was no room for error,” Whyte said. “He has had a tough run, he had to dig deep, he was workman like.”

Punters can expect to see more of jockey Neil Callan in Hong Kong this season.

The Irishman’s riding contract was due to expire at the end of this month, but it is expected that the Jockey Club’s licensing committee will extend his deal through to the end of the season.

While Callan has just nine winners so far this season, he can lay claim to being one of the more unlucky jockeys in Hong Kong, having also racked up 33 placings. 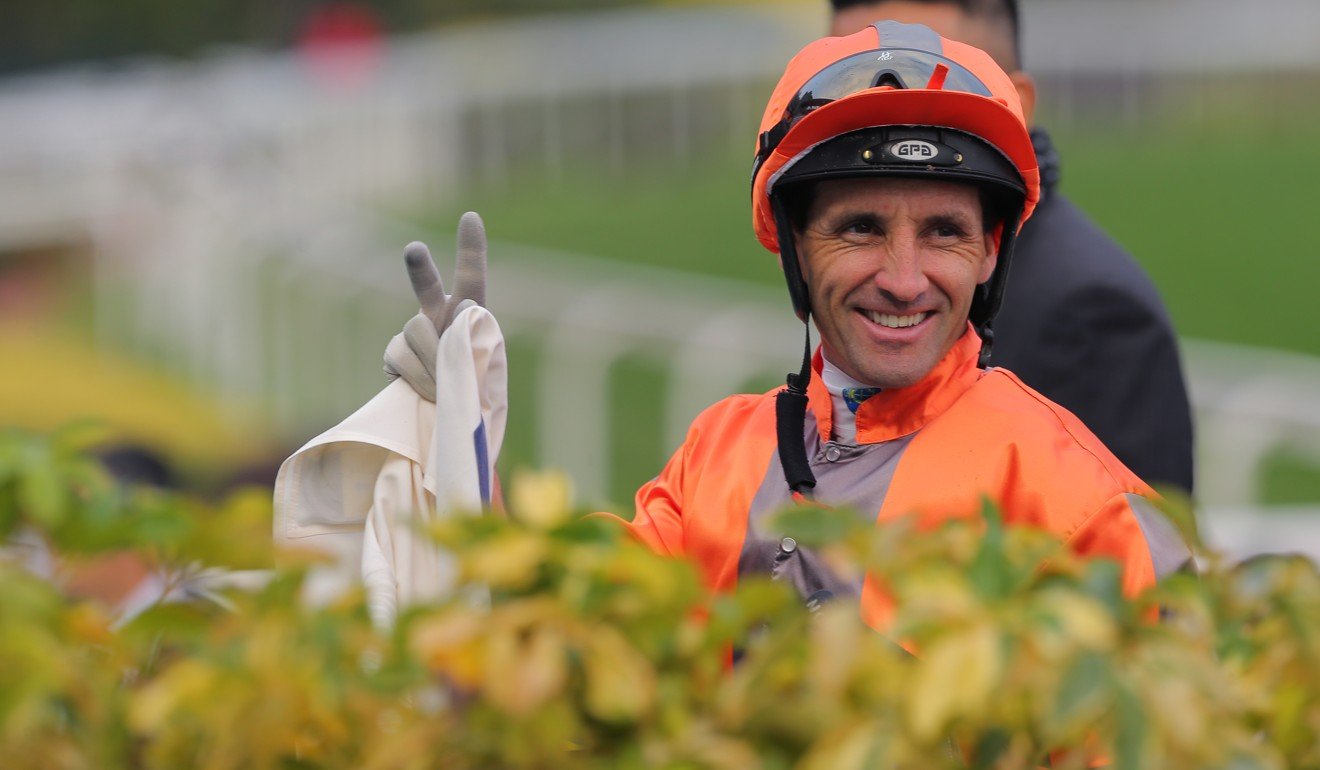 Callan has chalked up 238 career wins in Hong Kong in a career that spans back as far as December 2010.

February shapes as a busy month for the licensing committee with Alexis Badel, Lyle Hewitson, Tony Piccone and Blake Shinn all with expiring licences, along with De Sousa who rode his last day on Sunday.

Generation next in South Australia

Hong Kong’s next generation of apprentice jockeys has been unveiled in South Australia.

Both Angus Chung Yik-lai and Ellis Wong Chi-wang rode trials for the first time in Gawler on Friday to kick-off their careers.

Chung will ride under the leading training combination of Tony and Calvin McEvoy while Wong joined the Wayne Francis stable.

It is expected both jockeys will need to complete at least 30 rides in trials before being allowed race rides.

They join a handful of other jockeys from Hong Kong in South Australia who are vying for a spot back at Sha Tin this season.