Transcendent salutes in his Hong Kong debut, with the Australian jockey tasting more success in the distinct black and grey colours worn by Exultant and Absolute Champion 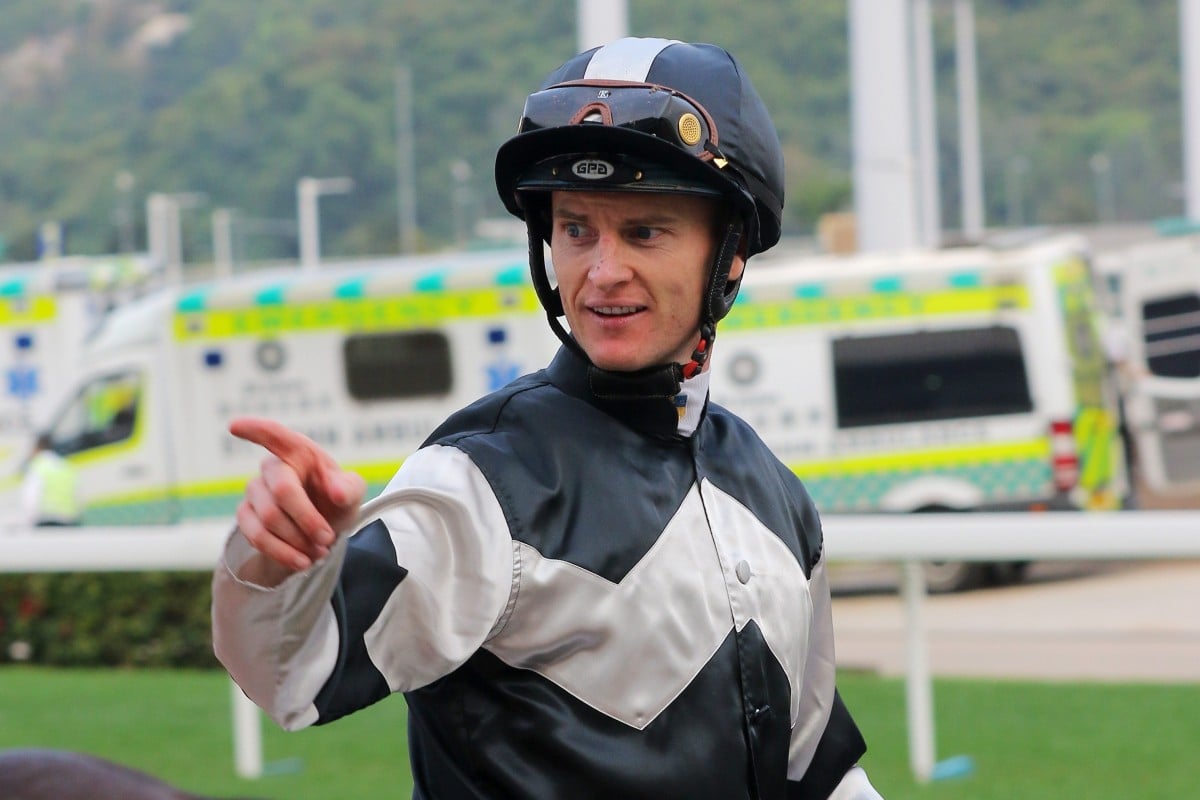 Zac Purton celebrates his win aboard Transcendent on his way to a four-timer at Sha Tin on Saturday. Photos: Kenneth Chan

Zac Purton had the help of some familiar silks as he landed his first four-timer since September at Sha Tin on Saturday, with the Australian booting home debutant Transcendent in the distinct black and grey made famous by Exultant and Absolute Champion.

Purton has won three Group Ones aboard Exultant and likes what he sees in Transcendent, who is also owned by Eddie Wong Ming-chak.

“He’s been impressive right from his first trial here, I’ve been really taken by him and I thought he would run a big race today,” Purton said.

“They’re a great family and they’ve been good supporters of mine. We’ve had a lot of success together and hopefully that continues.”

The European import, who won five times in France and the United Kingdom, joined a select club of previously raced horses to salute in their Hong Kong debut.

After settling towards the rear of the field from barrier 12, the four-year-old hit the line strongly to take out the Class Three Tai Yau Handicap (1,200m) from Fantasy and Ballistic King.

“I was obviously not happy when the draw came out but I found myself in a race where there was enough pressure to be able to close it off,” Purton said.

“He got there fairly easily and then thought his job was done and didn’t really put them to the sword, but he had a big weight and he was first-up, which is never easy. He’s got a nice future.”

The result was a long time coming for Tony Cruz, with the trainer forced to scratch Transcendent from an intended run at Happy Valley on December 11 after he suffered a foot injury while being transported to the track.

“He had some complications, I got him prepared to go to Happy Valley and then on the float he had an accident so we had to patch him up,” Cruz said.

“Everything was going well again then he had a foot problem and we were delayed another two months.”

The haul takes Purton to 83 winners for the term and leaves him just four behind title leader Joao Moreira, but the Australian says he isn’t thinking too much about the prospect of winning a third consecutive jockeys’ championship.

“It would be nice if I can win, for sure. It’s just about turning up every meeting and trying to ride as many winners as I can,” he said.

“It’s just going to come down to the support either of us gets through the back half of the season.”

The progressive Mighty Giant carried on his merry way, notching up his third win at start six for championship-leading trainer Ricky Yiu Poon-fai.

“He’s a nice big horse. He’s got a very good temperament, he tries to please everyone – me, the mafoos and the jockeys,” Yiu said.

“You seldom see a big horse that can ping out the gates that quick and have the turn of foot to be up there leading, normally they are a bit clumsy. He’s still improving and maybe I will try him over the mile in time.”