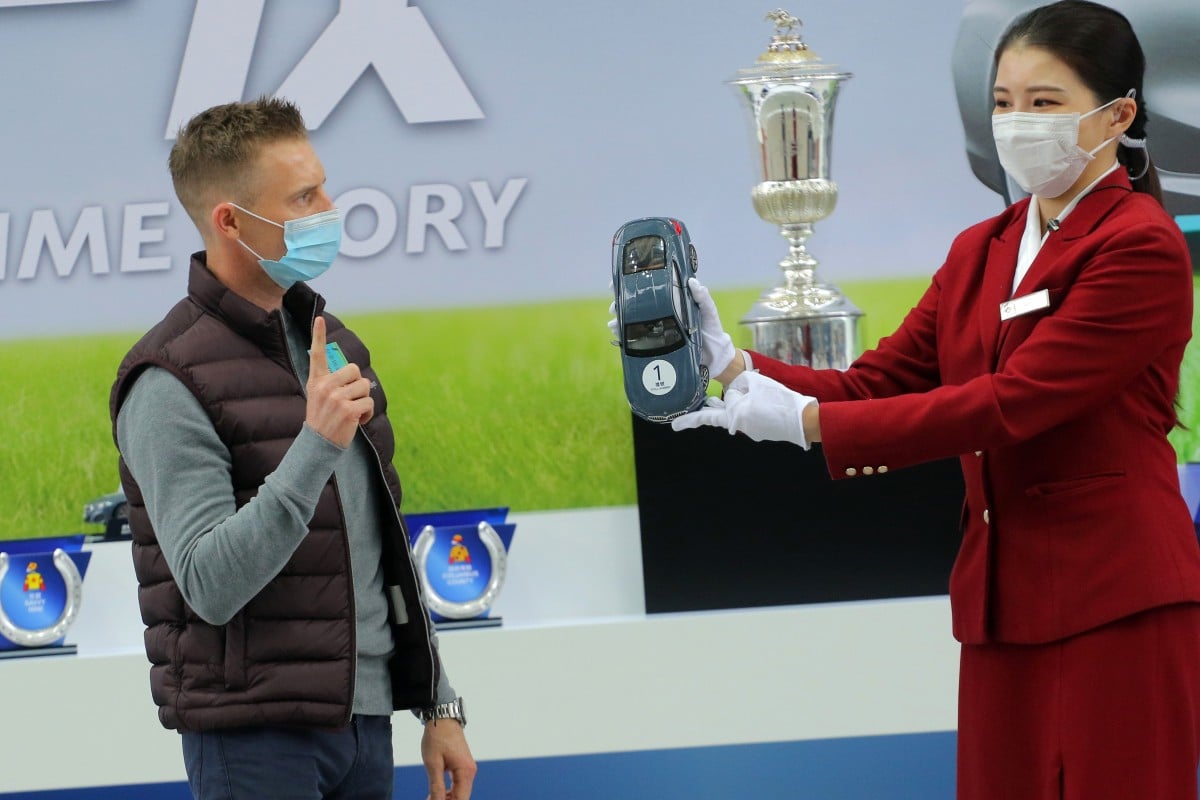 Zac Purton draws the barrier one for More Than This is Sunday’s BMW Hong Kong Derby. Photos: Kenneth Chan

Zac Purton hopes an inside barrier draw can help More Than This turn the tables on stablemate Golden Sixty in Sunday’s BMW Hong Kong Derby.

The three-time champion jockey plucked gate one for the HK$20 million feature, a big advantage after being dealt the outside gates in the first two legs of the four-year-old series.

More Than This still placed in both of them – finishing second in the Classic Mile and third in the Classic Cup – and now Purton believes he should be able to settle closer in running this time around.

“I think it helps me a lot. Hopefully we can get out of the gates and take a nice spot,” he said.

“In the first two legs of the four-year-old series he’s drawn outside gates and has had to go back. From an inside gate, that puts me in a more reasonable position and hopefully that means we can turn it around.

Golden Sixty has taken all before him so far this season – undefeated in six starts – so he is set to start a deserved favourite, but there has always been a slight concern about his ability to get the Derby trip of 2,000m.

That shouldn’t be a worry for More Than This, who races like he will relish it.

“He gets up to a distance that’s probably a little bit more suitable for him,” Purton said.

Francis Lui Kin-wai’s stable elect Golden Sixty, who is shooting to be the second horse after Rapper Dragon in 2017 to sweep the Classic Series, came up with barrier nine and is likely to settle towards the tail of the field as he has done in the other legs. The 11-time champion trainer hopes to slot in from that spot.

“I think the draw is OK for him and his racing style – to go forward a little – and I think there are four or five horses in there that’ll show decent speed, so hopefully he’ll be able to position himself midfield,” Size said.

Champion’s Way, who was the crowned “Champion Griffin” last season after winning six of his seven starts including the Group Three Lion Rock Trophy (1,600m), finished second in the Classic Cup last time out but there is also question about him being strong at the end of 2,000m.

“I think he was run down by a better horse on the day. I mean, obviously the 1,800m looked to be as far as he wants to go but Golden Sixty being a champion at present has the ability to sprint quickly and put them away fast – I think he showed his authority to win that day,” Size said.

“There’s a query about him running the 2,000m but he has got a nice rolling action and even though he’s a Hinchinbrook, he’s probably going to race well and acquit himself well and if he has a bit of luck he just might get the trip.”