Zac Purton hits back in title fight with Joao Moreira, reaching 100 winners with a stunning treble

After having his colours lowered by the Brazilian at Sha Tin on the weekend, the star Australian shows his class at the city circuit 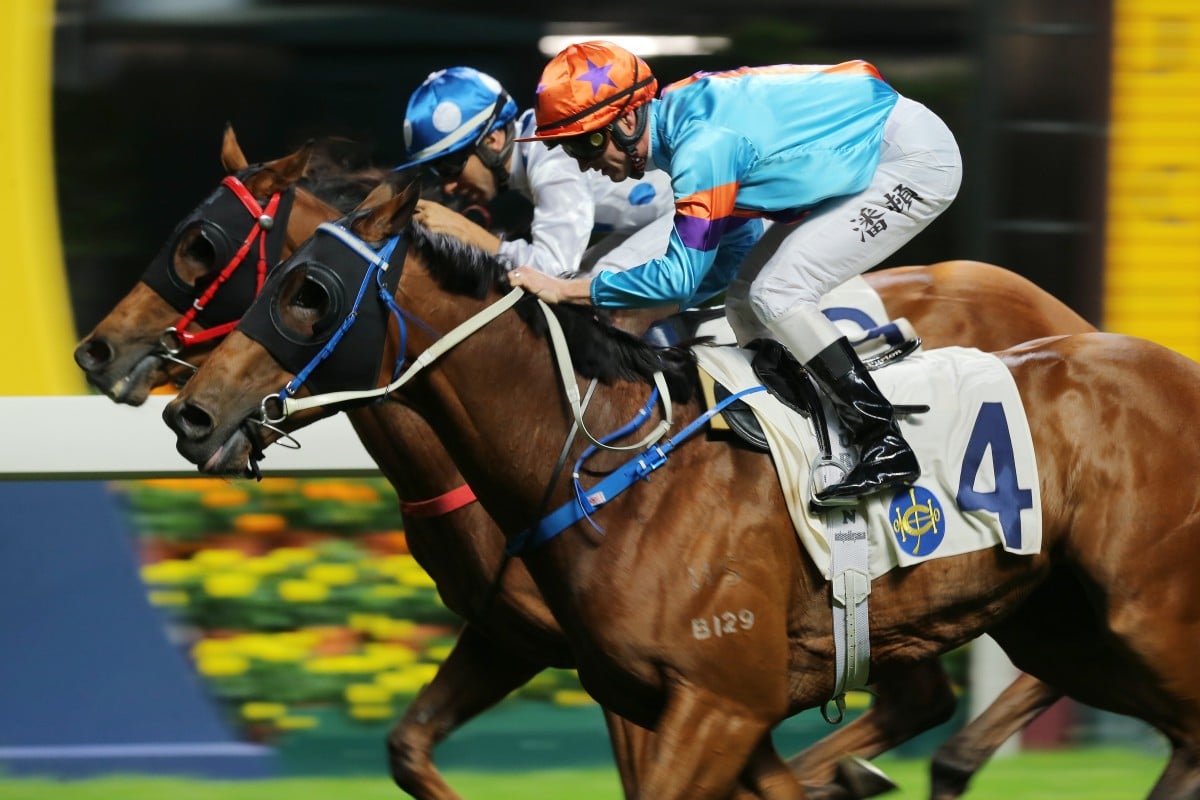 Sunday was Joao Moreira’s day, Wednesday night was Zac Purton’s – the nip-and-tuck battle for the jockeys’ championship well and truly alive, even with three months of the season still remaining.

After a treble at Sha Tin, the Magic Man held a four-win lead over the Australian coming into the Happy Valley card, but that margin was cut to just one as Purton produced a masterclass to notch his 100th victory of the campaign.

Three-time champion jockey @zpurton brings up a century of wins this season as Dances With Dragon scores narrowly in the nightcap! #HKracing pic.twitter.com/GG9huCs9j0

“I came here with some handy rides but I had some bad gates in races where it looked like the pace wasn’t going to suit but luckily a few things went my way and I got a couple of results,” Purton said.

The two highlighted their class in the last event – they were the only jockeys to pounce when the pace slackened down the back straight – sweeping to the front with 600m to go and clearing out for a ding-dong battle down the straight, with Purton (Dances With Dragon) getting home by a head over Moreira (Enrichment).

“I was happy when he made the move that he did, it was the right move obviously and it was a good battle in the straight,” Purton said. “I said to him when we got back in ‘you couldn’t bump me out of the frame this time Joao’.”

The result meant the Brazilian didn’t see the winner’s circle on the night while he was also hit with a one-meeting suspension and HK$60,000 fine for careless riding aboard Heavenly Thought.

Hong Kong's champion jockey @zpurton bags a double as Island Shine gets up by a nose! 2⃣ #HKracing pic.twitter.com/F4VBqPh7pq

There was another milestone to open the night with Benno Yung Tin-pang training his 200th winner in Hong Kong as the troubled Humble Steed finally broke his maiden in the Class Five Walnut Handicap (1,650m).

It was a welcome result for the patient connections, who have only seen their horse race nine times after arriving in March 2017 because of a leg fracture and two suspensory injuries.

“I’m delighted to have 200 winners in Hong Kong,” Yung said. “It’s great this horse could finally open his account – he’s had quite a number of issues. It was the right distance, he had a good draw – everything finally came together.”

It was the first of a double for Karis Teetan, who also combined with Tony Cruz’s improving sprinter California Rad in the second section of the Class Four Larch Handicap (1,200m).

Cruz then notched a double of his own when Sunshine Warrior held off a wall of horses to capture the Class Three Fountain Palm Handicap (1,650m).

It extends a remarkable run for jockey Chad Schofield, who has now had a winner at each of the past seven meetings and 13 victories since the start of March.

Speaking of good form, Antoine Hamelin continued the red-hot start to his Hong Kong stint, producing a smart Happy Valley ride to salute on the Peter Ho Leung-trained Lasting Friendship in just his third look at the unique track.

The Frenchman got out of the gates quickly, secured a prominent position on the rail – initially in the box seat before being shuffled one pair back – and then picked his way through a gap at the top of the straight and came away to score. It bodes well for the rest of Hamelin’s campaign.

International Sale Graduate Humble Steed gets off the mark in the opener for @KarisTeetan to give Benno Yung his 2⃣0⃣0⃣th win! #HKracing pic.twitter.com/zHQnIlnYg3

Dylan Mo Hin-tung made a successful return from suspension as he piloted Sky Treasure to a surprise victory in his first ride back after eight meetings on the sidelines.

Mo, who was outed for not taking all reasonable and permissible measures to achieve the best possible placing aboard Racing Fighter on February 16, was smiling from ear-to-ear as he returned to scale on the $39.80 shot for just his seventh victory of the season.

“I’m very happy to get a win so quickly – I was very lucky,” Mo said. “It was a big surprise for me. I will keep trying my best.”

The Derby champion will now enjoy a well-earned break after becoming just the second horse to sweep the four-year-old series after Rapper Dragon in 2017.