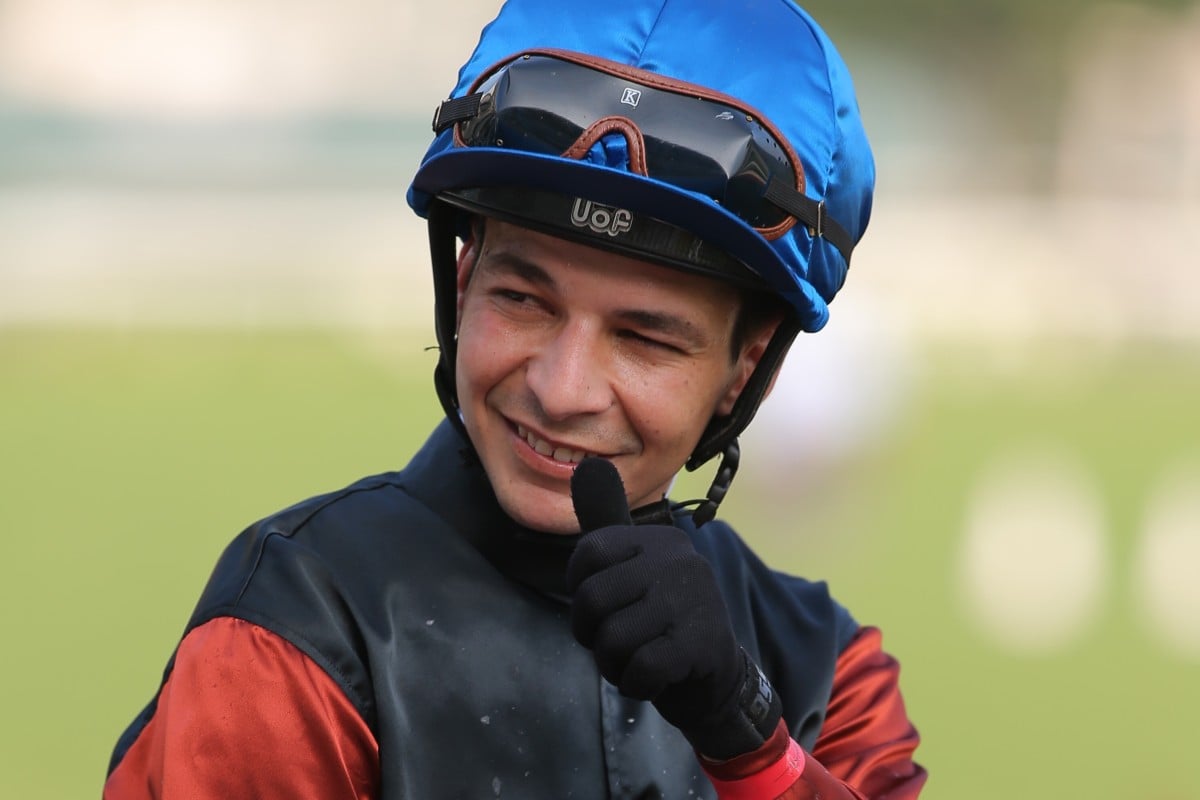 Vagner Borges rode his first double since the retirement of John Moore at Sha Tin on Sunday, snaring his maiden winner for Ricky Yiu Poon-fai and also saluting for Benno Yung Tin-pang.

Half of Borges’ 16 winners last season came for Moore and the Brazilian looked to be in a tricky spot heading into the season, but he has now notched five winners to sit seventh in the jockeys’ premiership.

Borges has worked hard on building new relationships and has ridden for 17 of the 22 trainers so far this season, with the jockey quick to voice his appreciation for Yiu’s efforts. 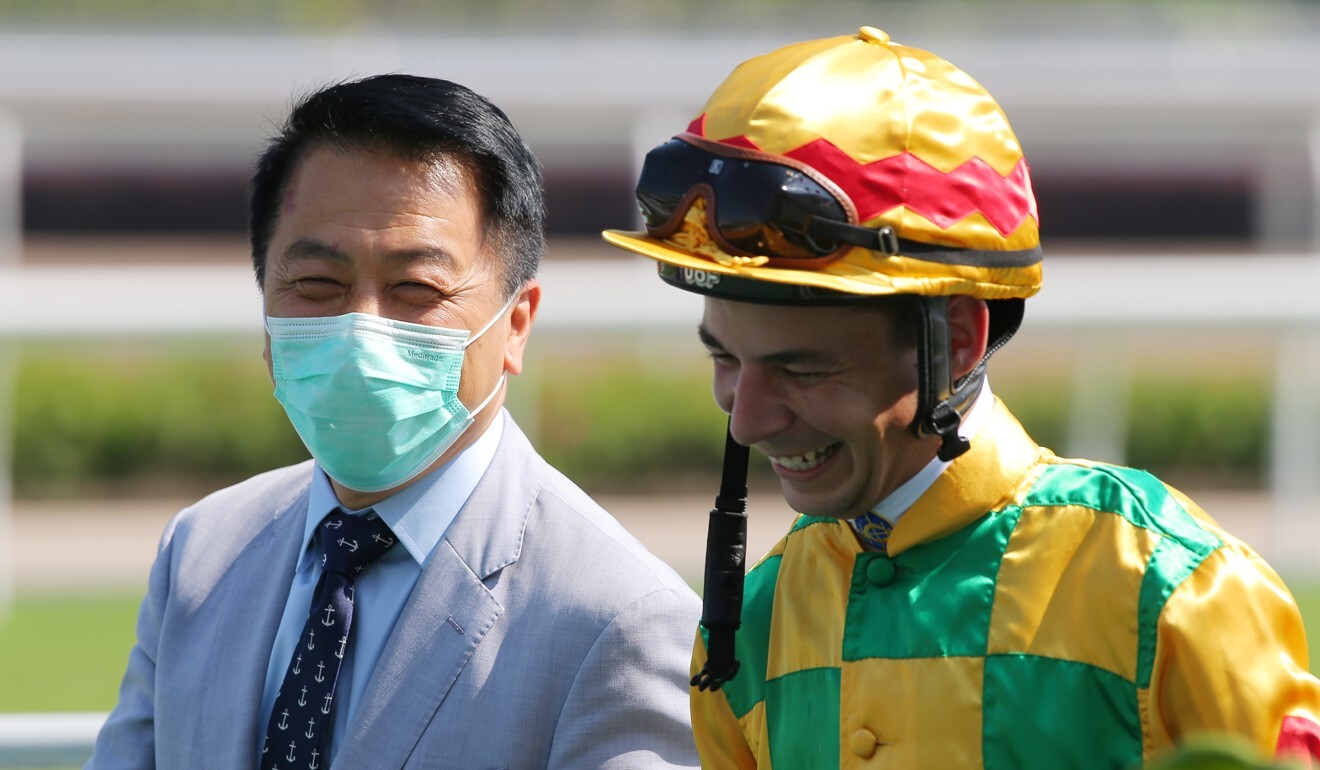 “Ricky helps me, gives me support and I work for him every day,” Borges said.

But it was Chris So Wai-yin that the Brazilian reserved the highest praise for.

The pair did not land a winner together last season but Borges’ first three victories of this term came for the likeable trainer, while 16 of his 58 rides have been for So.

“John Moore was my [mentor] but my new [mentor] is Chris So. Chris has helped me very much,” Borges said.

“It was spectacular to have two winners,” Borges said. “I had many winners for John, he was a very good trainer and a very good man, but it’s good to ride winners for different trainers. I still need more opportunities here so I can ride more winners.”

Mighty Valor rung up his second victory from nine starts, leading all the way to salute by three lengths in a swift 1:08.61, the gelding stopping the clock .02 quicker than California Rad in the Class Two.

“He has a stunning style and the time was magnificent, too. He’s improving and has benefited from training in Conghua,” Yiu said. “[Borges] is a very underrated jockey.”

Yiu landed a double of his own, also taking out the Class Four Tai Hang Tung Handicap (1,800m) with Natural Storm.

“I expected he would do well, he’s a better horse in Class Four but we’ll see how he progresses – I want to see him do well at a higher level,” Yiu said.

The reigning champion trainer moved to six winners for the term but was realistic about his chances of landing back-to-back titles.

“I hope that I can copy last season but I had three or four horses that won four times, I’m not sure I can find any horse that can win four times this season,” he laughed. “I’m not defending my championship, it’s pretty simple.”

Ho on the double

It was a day of doubles at Sha Tin, with Borges and Yiu joined by Matthew Chadwick, Chad Schofield and Vincent Ho Chak-yiu.

Ho teamed up with Yiu to salute with Natural Storm two races after hitting the board in the Class Five Un Chau Handicap (1,600m) atop the Caspar Fownes-trained Nunchuks.

The six-year-old hit the line strongly to salute by a length and a half from Yes We Can and deliver a welcome result for Ho, who has been front and centre for much of the son of O’Reilly’s ratings slide.

Ho has been aboard in seven of Nunchuks’ 11 starts, with the New Zealand import slipping from a rating of 52 down to a mark of 35 before Sunday’s breakthrough.

It was Ho’s fourth double of a consistent campaign so far, taking the leading local jockey to 11 wins after 11 meetings.

Beluga a stayer in the making: Hall

David Hall thinks Beluga is a young stayer on the rise and he took another important step forward in the first section of the Class Four So Uk Handicap.

Stepping up to 1,400m for the first time, the four-year-old looked less like a sprinter as he ground away to beat Sam’s Love and Fortune Hero as a $1.75 favourite with Zac Purton in the saddle.

Hong Kong's champion jockey @zpurton is on the board as Beluga grinds home in the second race! #HKracing pic.twitter.com/QR5Cl9BfrC

“It was a nice, workmanlike win,” Hall said. “Barrier one, a sweet run and the top jockey on – he executed it well.

“He’s really been a work in progress and he’s slowly but surely learning to relax. I think he’s developing into the horse that we think he should be, being by Tavistock. He’s taking that time to learn how to be a stayer and it was another step in the right direction today.

“We’re still learning about how far he can get, but you’re just relying on the pedigree. As an individual, he was a strong, heavy colt and now he’s turning into a longer, leaner, staying type of horse. So you’re hoping he’s going to run 1,600m-2,000m – we’re thinking that’s his game.”

In ominous signs for Hong Kong star Exultant, Glory Vase performed impressively in the race he could only manage sixth in 12 months ago before heading straight to Sha Tin and dismantling his opponents on international day.

While it is yet to be confirmed whether a Japanese contingent will be permitted to travel to Hong Kong in December, Glory Vase’s owner Silk Racing will be following developments eagerly after suggesting the five-year-old’s next run will come in either the Japan Cup or the Hong Kong Vase.

And Glory Vase may not be Silk Racing’s only representative on Hong Kong’s biggest day, with the powerhouse operation suggesting star three-year-old Salios could tackle the Mile or the Cup after winning the Group Two Mainichi Okan (1,800m) in Tokyo.

Twice second behind the brilliant Contrail, Salios coasted to victory under Christophe Lemaire and reports suggest connections are considering either coming to Hong Kong or staying in Japan for November’s Mile Championship.