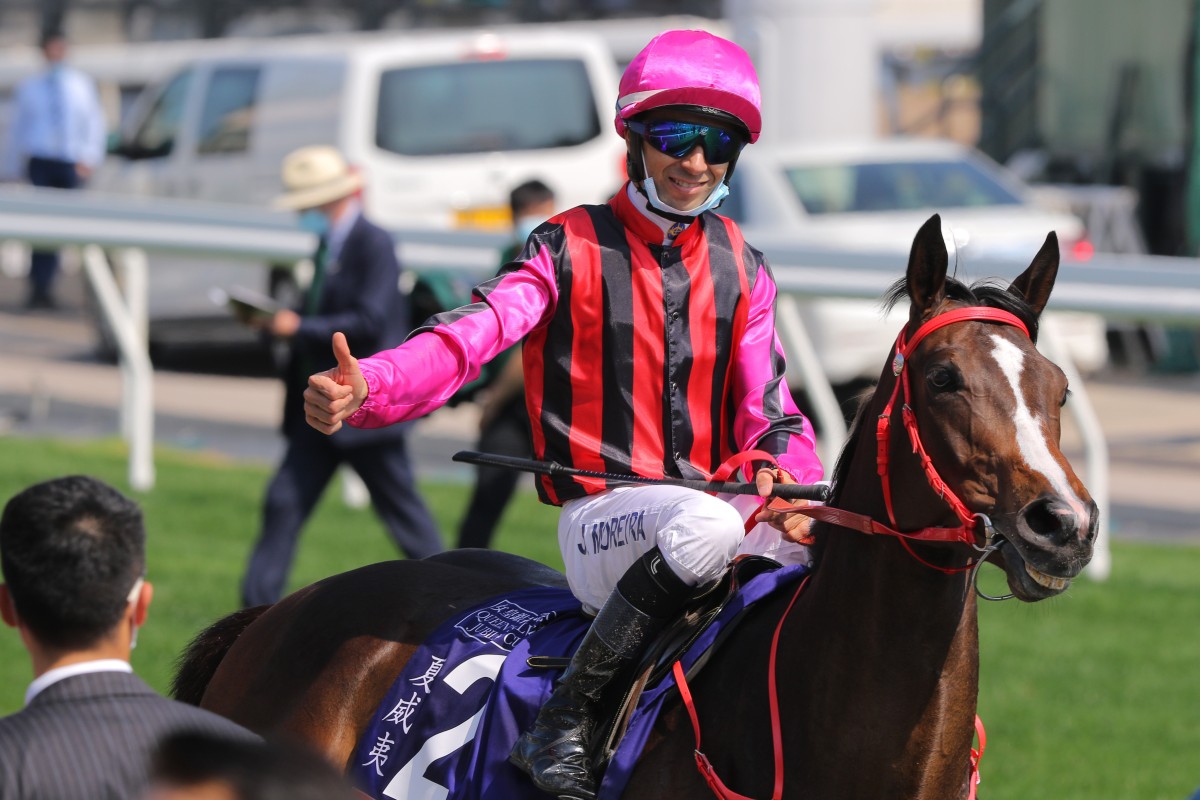 Joao Moreira hopes Waikuku can capitalise on the absence of Golden Sixty in Monday’s Group Two Chairman’s Trophy and salute at 1,600m for the first time since his victory in the Group One Stewards’ Cup over a year ago.

Waikuku has finished fourth behind Golden Sixty twice at a mile this season and Moreira believes the six-year-old can be the main beneficiary of Francis Lui Kin-wai’s decision to bypass this weekend’s race with the star galloper.

“I’m quite surprised Golden Sixty is not in the race and Waikuku goes in as a good winning chance. He’s been a very good horse for me and it’s a winnable race, he just needs to bring his A game,” Moreira said.

The John Size-trained Waikuku has also been beaten home by Southern Legend in their past four meetings over a mile but he did get the better of Caspar Fownes’ charge at seven furlongs last start and Moreira is confident he can maintain the upper hand.

“This is a very suitable race for him but we do have to respect horses like Southern Legend, Ka Ying Star and More Than This, who has been a bit unlucky lately,” the Brazilian said.

“These horses make it a strong race but Waikuku has to be the favourite and I will be very disappointed if he doesn’t run a good race.”

With Hot King Prawn missing from the day’s other Group Two after Size decided to put him away for the season, Moreira jumps aboard stablemate Beauty Applause.

Moreira has won aboard the five-year-old six times as he’s climbed through the grades and is looking forward to seeing what he can deliver in his first Group test in the Sprint Cup (1,200m).

“He has been running well enough to deserve his chance at this level and we are going to find out if he’s up to the class,” the jockey said.

“He’s been doing well in a lower grade and I’m happy to give him a go. All of his wins have been with me on board and I’m happy to be on for a Group race, I think he’s good enough to finish in the top four.”

Beauty Applause has drawn barrier seven and meets a field boasting the exciting Wellington, as well as the likes of Computer Patch and Wishful Thinker.

‘He’s the exciting youngster in town’: Richard Gibson hopeful Wellington can step up in Sprint Cup

Also among Moreira’s 10-strong book of rides is the unbeaten Killer Bee, with the Magic Man replacing Blake Shinn in the saddle after the Fownes-trained speedster was given a nine-point penalty for his debut victory, meaning his carries just 116 pounds in the Harlech Handicap (1,200m) – his first Class Three assignment.

“I was impressed with his debut win and with the light weight on his back he should be able to do his best,” Moreira said.

“It doesn’t look like a strong race and I’m quite confident that he’s a good winning chance once again even though he’s up in class.”