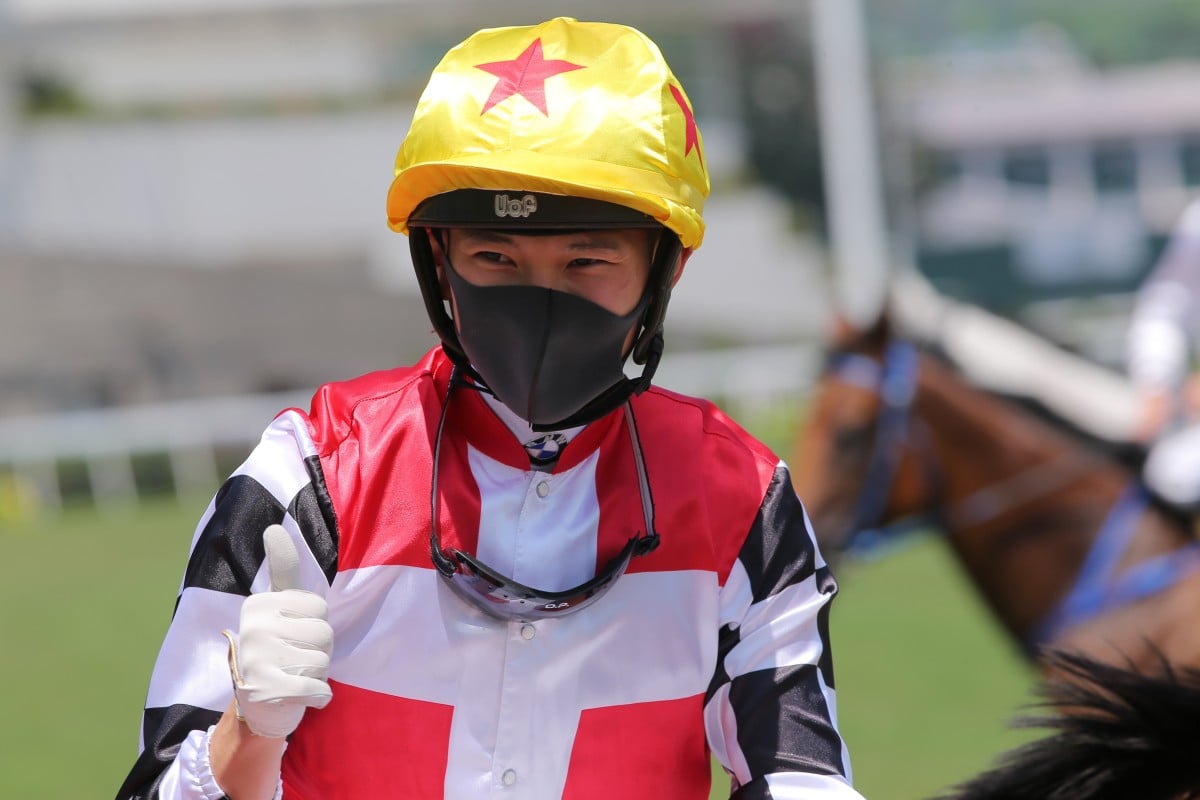 Apprentice Jerry Chau Chun-lok rode his first winner as a five-pound claimer at Sha Tin on Saturday and the 21-year-old says he will spend the rest of the season focusing on avoiding the wrath of stewards after a string of suspensions.

Chau booted home a treble at Happy Valley on Wednesday night, ringing up his 45th winner in the process and seeing his claim drop from seven pounds to five.

It did little to slow him down, with the jockey delivering aboard First Responder for his master Douglas Whyte on Saturday to move to 40 winners for the season.

“Claiming five is a new step but my career is only just starting, there is still a long way to go. A big thank you to my boss for giving me very good support,” said Chau, adding that his first year as a jockey has been a constant learning curve.

“I’m learning about the mindset that is required, that if you train hard and work hard the luck will come.”

Chau has a suspension coming up later this month but after that, it’s continuity that he craves.

“I’m trying to be aware of shifting in or shifting out, I’m just trying to keep straight and not interfere with other jockeys. Suspensions break my momentum and it’s not easy to pick it up again,” he said.

It was at this meeting a year ago that Chau began his Hong Kong career with a double and he says the past 12 months have been a roller coaster.

“The beginning was a bit tough because I got two winners on my first day and after that it was a bit quiet and the pressure started to come,” the jockey said. “I needed to take time to adjust to the pressure and this season I have got better and better.”

Whyte outlined on Wednesday night his belief that claiming only five pounds will help Chau because he can accept lighter rides and the jockey is looking forward to being able to stick with more of his winners.

“Before if a horse went up in class after winning the weight was difficult to ride because it was so low but now claiming five I should still be able to ride some of these horses going up in class,” he said.

First Responder’s victory in the Class Four Daphne Handicap (1,200m) was his second for Whyte after joining the South African’s stable from John Moore last season, with Chau working his way to the front from barrier 11 and leading throughout.

“In Class Four he is a very competitive horse. He tried very hard and he settled nicely in the lead and he gave me a great kick in the straight,” Chau said.

Whyte finished the day with a double, also saluting with Super Ten in the Class Three Celosia Handicap (1,400m).

Taken straight to the front from gate five by Zac Purton, the Danny Shum Chap-shing-trained Hongkong Great shaved .19 seconds off the mark Gun Pit set in 2015 to salute by five and a half lengths.

Hongkong Great was the second galloper to lead throughout on the dirt after Skyey Supreme did the same in the other contest on the surface.

“You could see the other dirt race nearly broke the class record so I wasn’t surprised he broke the track record,” Shum said.

“Zac did very well to hold him, he still went fast but it wasn’t crazy like he has done previously,” the trainer added, referencing Hongkong Great’s third placing in February after storming to an enormous mid-race lead under Antoine Hamelin.

Hongkong Great has amassed an impressive record this season, with two Class Three victories and one in Class Two, and Shum said he will consider testing the three-time Chilean Group One winner abroad if circumstances permit.

“Hopefully we can go to Korea if the virus is gone but we’d need to be able to bring a rider. The owners wouldn’t want to take the horse overseas if we couldn’t take one,” the trainer said.

The win completed a treble for Purton, who also tasted success aboard Eligere and Kung Fu Tea.

A sensational closing sectional propelled Killer Bee to a stunning victory at Sha Tin on Saturday, giving trainer Caspar Fownes confidence the exciting three-year-old is heading in the right direction.

Not a lot went right for Killer Bee in the run – jockey Joao Moreira had to hunt him up early and he didn’t have much room early in the straight as he looked for a run – but he overcame those challenges with a barnstorming finish.

Chasing down runaway leader Mighty Valor, the youngster exploded in the last 150m to grab his rival in the shadows of the post.

His final 400m split of 21.81 was easily the quickest of the day and almost a half-second faster than any horse in the race.

“It’s nice the horse knuckled down and showed us what he’s got. We’ve always felt he’s got a very big engine,” Fownes said. 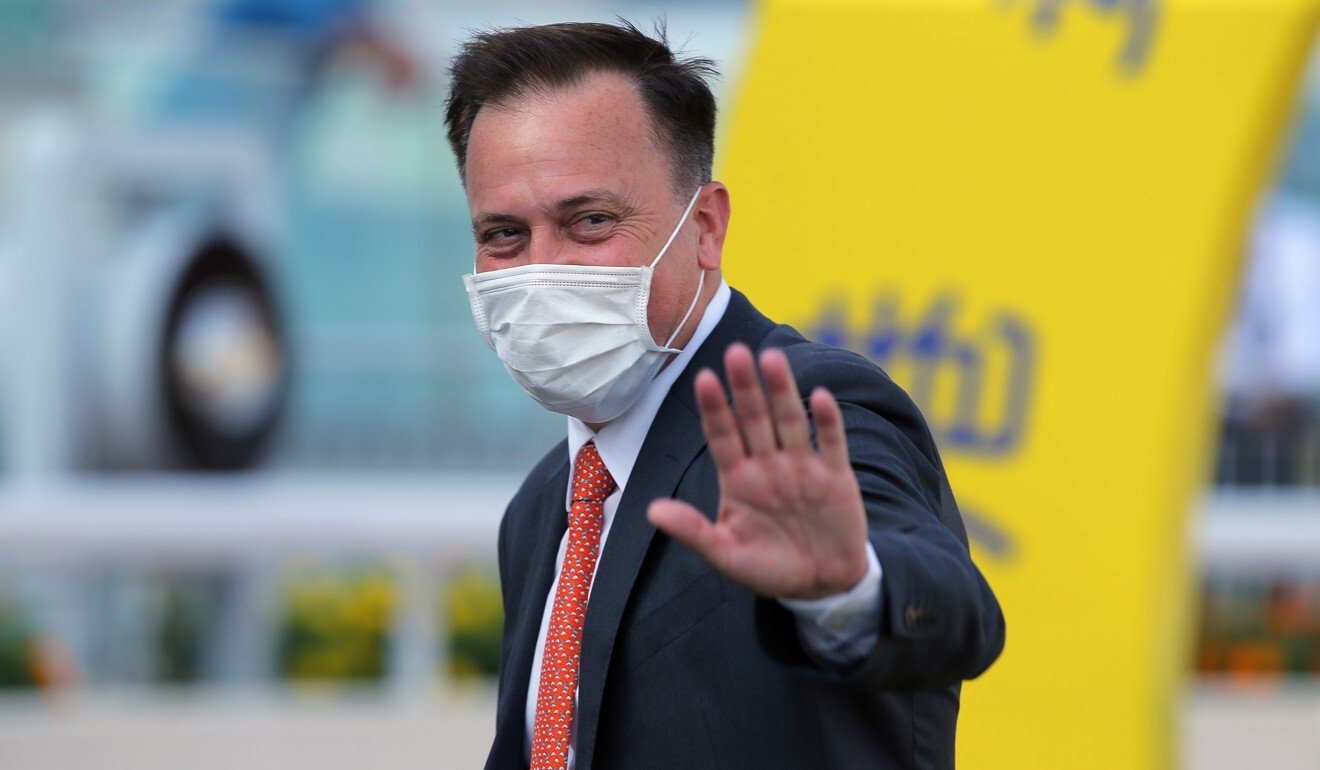 “He’s still very young and immature and learning his trade – he was quite naughty before the race and quite naughty after the race. He was doing some silly things [but] he’s going to learn with some more experience.

“We played around with his equipment to get him as settled as we can. He’s a work in progress. He’s got a lot of upside but we’ve slowly got to bring him there. He’ll get there and be a good horse.”

A pair of massive jackpots await punters for next Sunday’s Sha Tin meeting after neither the six-win bonus or triple trio went off on Saturday.

Jack Wong finally a winner again after mid-season reset: ‘I started from the bottom’

Saturday’s triple trio players were scuppered by Red Elysees ($16) and Peach Blossoms ($42) winning and the likes of Speedy Dragon and Stunning Impact placing at double-figures quotes.

Red Elysees and Peach Blossoms also sent a curve balls the way of those invested in the six-win bonus, while Skyey Surpeme ($20) also got the chocolates.