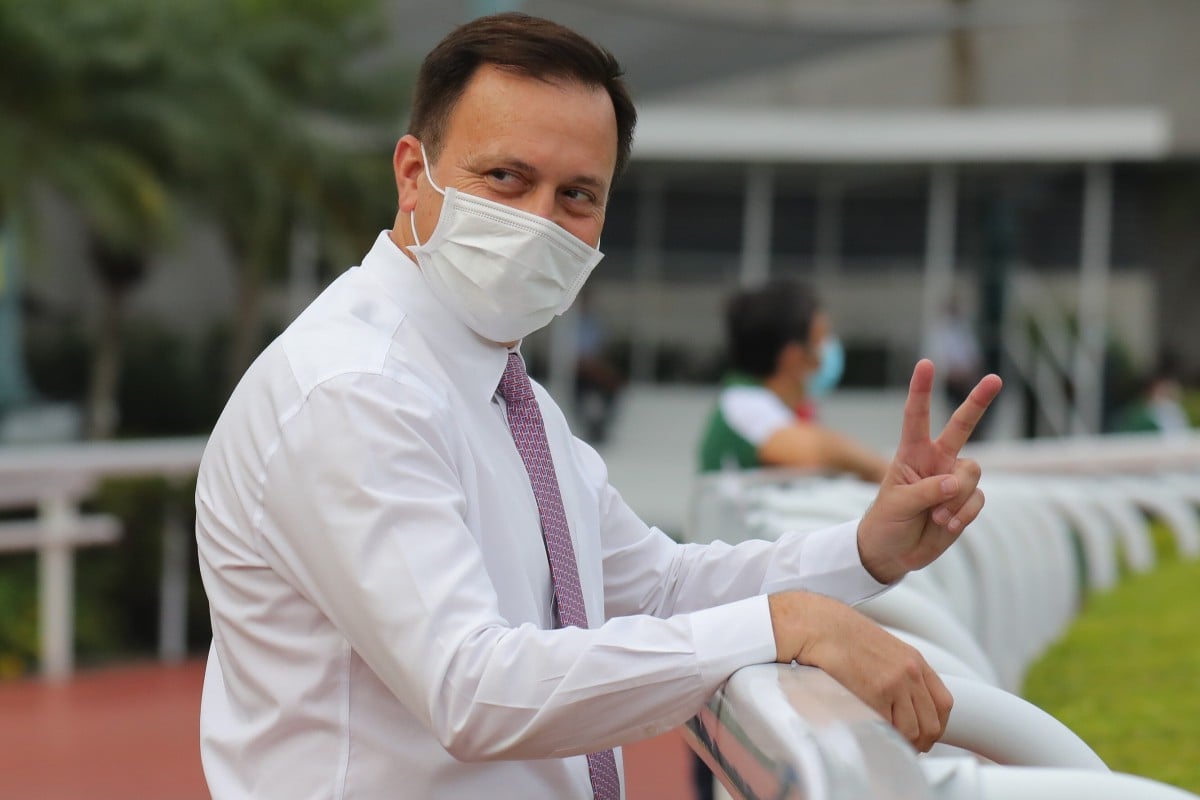 Caspar Fownes is in pole position to capture his fourth trainers’ championship after moving three wins clear with 10 meetings to go after a double at Sha Tin on Sunday.

Seven Heavens and The Rock delivered for the 53-year-old, taking him to 68 victories for the season and matching his previous best from 2008-09, when he won his second title.

Fownes is in terrific form with nine winners from the past five meetings, snatching the lead back from 11-time champion John Size in the process, who has now gone winless at the past four race days.

But things can turn around quickly and Fownes is not taking anything for granted.

“I’m happy – I’m just getting there. It’s going to be close and I’m having my run again, which is what I expected I’d do, and [hopefully] it can continue until the end of the season and I can get the job done,” he said. “Absolutely [I’ve got more ammunition].”

The Rock took out the day’s feature, the Class Two Chung On Handicap (1,600m), with Chad Schofield controlling the race from in front after jumping from barrier 14.

“We studied the race and we found there was not much pace so I told Chad to give him a nice warm-up and go out and control the race if we can. The horse has been racing very consistently all season – he’s a very honest horse and he quickened up nicely,” Fownes said.

“He’s going to get probably eight points for that win now so all of a sudden he’s getting close to 100 so the options are going to be limited. Maybe we’ll go to the [Class One] Sha Tin Mile on the 11th [of July]. That’s probably a race I will look at – up in class and down in weight.”

A well-judged front-running ride from @SchofieldChad gets The Rock home in the finale! #HKracing pic.twitter.com/1HNSEQO0Ba

Schofield was impressed with the effort.

“He took a bit of time to get there in the long run to the first turn but they left me alone and I was able to rate him as I liked,” Schofield said.

“I picked it up when I wanted to and, to the horse’s credit, when I pushed the button, he gave me a good spurt. Strong win.”

The seven-year-old son of Frankel was prominent throughout before coming away to win by three lengths.

“He’s got his issues, he’s always had ability but today Joao [Moreira] sorted him out and got the better of him,” Fownes said.

“We’ve always been riding him where he’s comfortable and he was running well but today he jumped and Joao put him there and got stuck into him and he looked quite good. He looked strong to the line.

“I hope he pulls up well because he’s versatile – he can run on the dirt, he can run at Happy Valley or Sha Tin.

“I’m just happy to get that result because the horse came here with quite high credentials and he never really lived up to that potential. That’s Hong Kong for you.”