Fans flock back as shackles loosen at Sha Tin, leading to record turnover

A crowd of 16,356 turns up for the opening meeting of the season with punters investing more than HK$1.44 billion on the 10 races 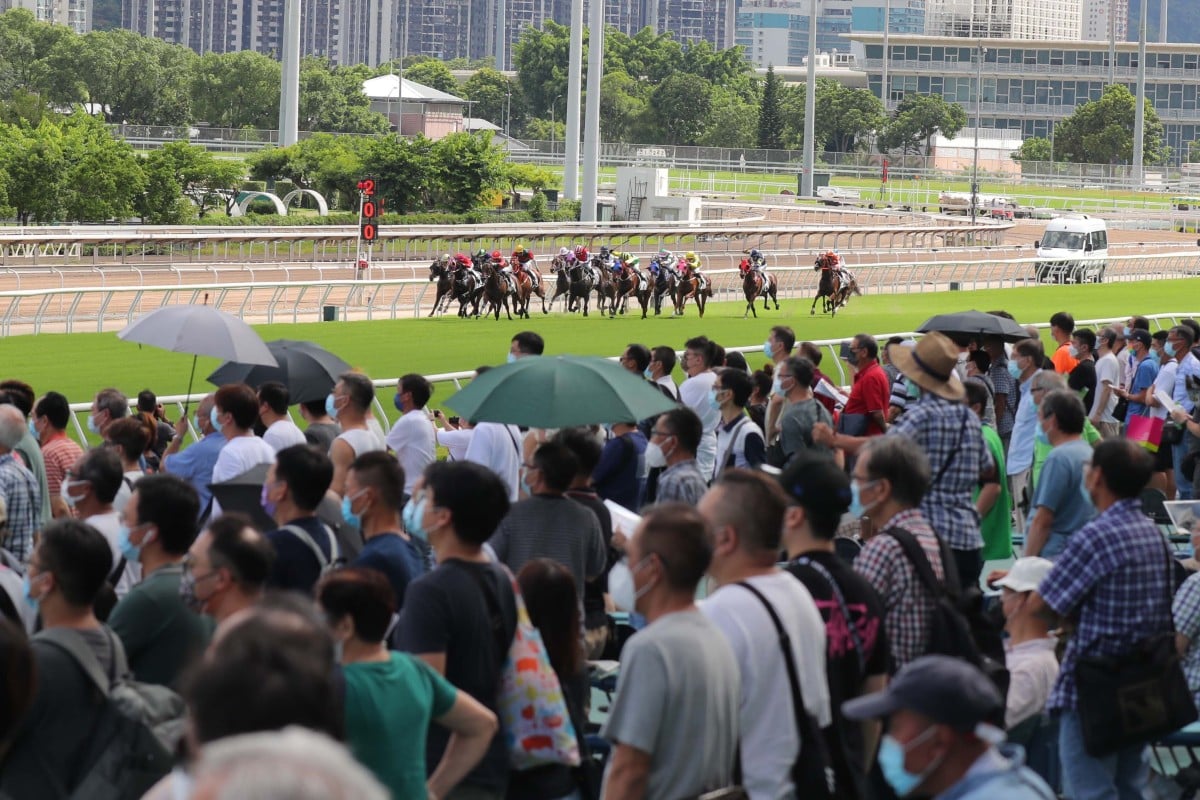 Punters watch on as the field for race five charges down the home straight at Sha Tin on Sunday. Photos: Kenneth Chan

Queues to get in, a bustling parade ring, a buzzing concourse and a season-opening gong struck by Hong Kong Chief Executive Carrie Lam Cheng Yuet-ngor for the first time in three years – Hong Kong racing is alive again.

While Covid-19 still looms large and Sunday’s crowd was a far cry from the massive numbers Sha Tin is famous for, the vibe that is so unique to Hong Kong racing was back in a big way as the 2021-22 campaign got under way.

The official attendance of 16,356 was the biggest since January 1 last year as well as Hong Kong racing’s first five-figure audience since January 22, 2020 – the final meeting uncurtailed by Covid-19 restrictions – and well more than double last season’s peak of 6,671.

The total turnover of HK$1.44 billion was an opening-day record, sailing past the previous mark of HK$1.376 billion set 12 months ago. 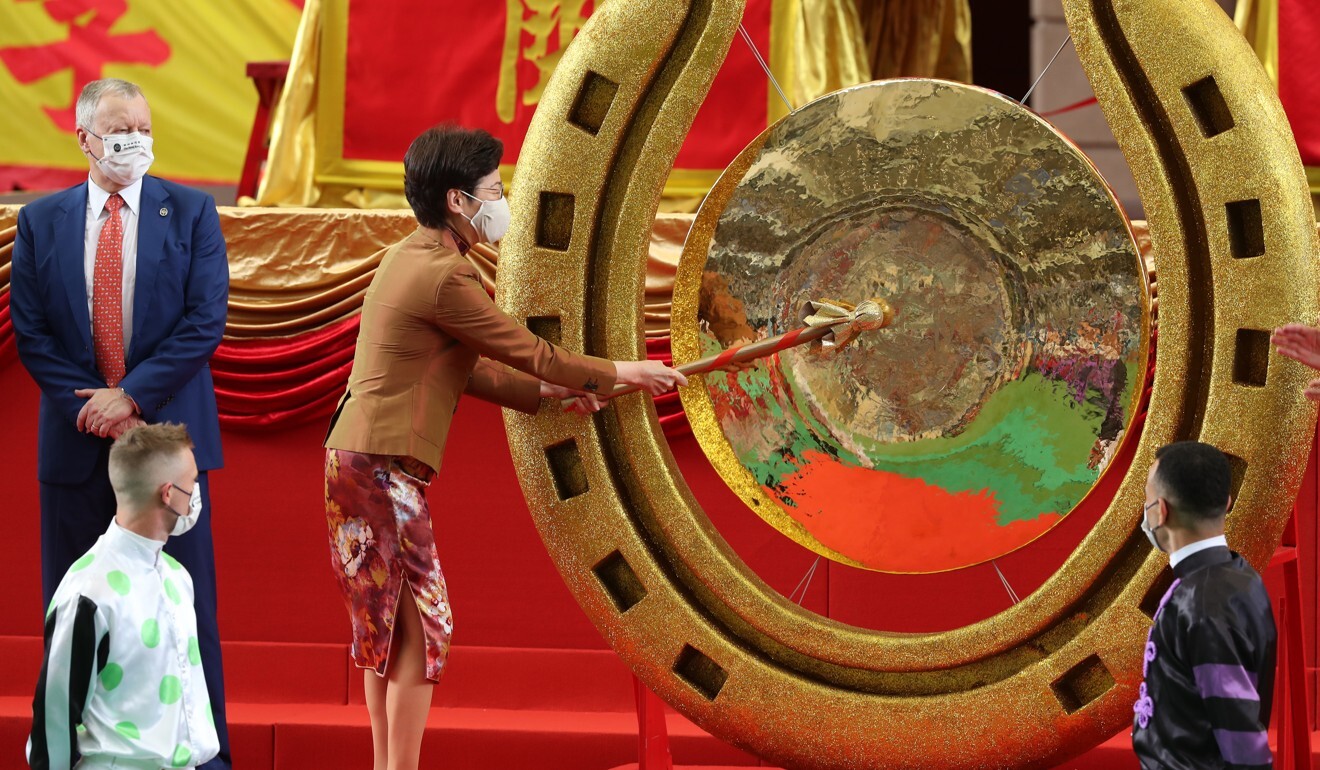 “I personally think it was the start we could not have had hoped for. It was a wonderful atmosphere to have our customers back on track,” Jockey Club chief executive Winfried Engelbrecht-Bresges said.

“We had 17,563 in attendance [including 1,207 cross-betting at Happy Valley], which is extremely positive.

“We were aiming for around 15,000 and you can see we introduce very stringent health measures and we didn’t want to have to creative a negative customer experience. We were very mindful not to push this too hard.

“On the business side, turnover is a record. Last year we had a significant increase in turnover and to have turnover of HK$1.44 billion, which is an increase of 4.7 per cent, I think it is a tremendous start to the season. 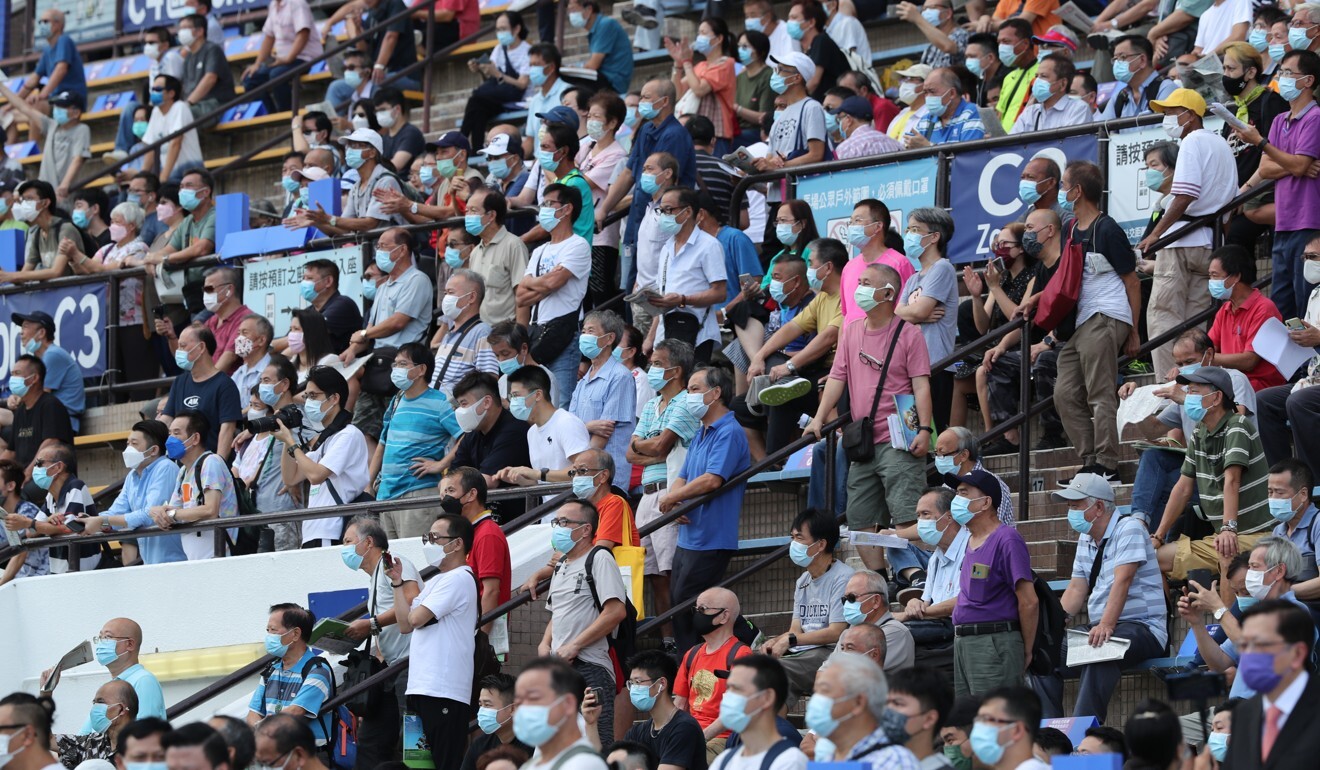 “We could not have hoped for a better start from the sporting point of view and the business point of view. Going forward, I look forward to Hong Kong racing going from strength to strength.”

After striking the gong to open the season for seven consecutive years, firstly in her role as Chief Secretary before she became Chief Executive in 2017, the social unrest of 2019 and then the pandemic have kept Lam away for the past two years.

The heightened security at the members’ entrance and surrounding her every move made it obvious she was back and she remained on track to present the HKSAR Chief Executive’s Cup to the winning connections of the David Hayes-trained Naboo Attack after race four.

Her presence followed the reappearance of government officials at the Establishment Day meeting on July 1 – the first time they had taken part in the post-race presentations in almost two years. First Responder has now won three of his past four starts after just one win from his first 29 outings, with Chau the only jockey to salute aboard the gelding.

“The horse has done a fantastic job for my stable and he’s got a really good association with Jerry,” Whyte said. “It’s good to get my stable and Jerry off the mark – it’s always nice to have a winner on the opening day.”

After 18 runs for John Moore, First Responder broke his maiden in his first run for Whyte before 10 winless results under other jockeys before Chau again took the reins.

Whether putting him on pace or settling him further back like he did on Sunday, there is no doubt Chau has the keys to the born-again galloper.

“If you jump and you chase him for too long he goes too fast and he doesn’t catch a breather,” Whyte said. “But [Chau] left him alone the first 100m because Zac [Purton] was quicker than him today on Quadruple Double and he sort of sat three-quarters of a length off that horse and let that horse do the dirty work.

“Where he becomes very tactical and very tough is that he’s got a long run after that. If you can give him his chance early to find his feet he’ll be strong at the end.”

While he was near the back of what was a relatively compact eight-horse field after jumping, First Responder worked beautifully into the race and claimed tiring runaway leader Super Axiom in the final 50m.

“Last time he ran he was up doing the dirty work in front and dictating things, this time he had a horse to chase,” Whyte said.

“He’s shown that he’s pretty versatile and I think he’s certainly better ridden like that, where he can chase something. He seems to dig down and enjoy getting into a fight.”

Karis Teetan kicked off his season in spectacular fashion, collecting a treble, but it wasn’t all smooth sailing for the talented Mauritian.

After piloting the David Hayes-trained Naboo Attack to victory in the Class One HKSAR Chief Executive’s Cup (1,200m), Teetan lifted Ezra to victory for the Tony Millard stable but he had to get his third one the hard way.

When parading behind the barriers before the Class Three Sunset Peak Handicap (1,400m), the 31-year-old was smacked in the face by Star Performance, who threw his head back into the jockey.

After inspecting the damage, the doctor gave Teetan the green light to jump back aboard and the six-year-old gelding made up for the indiscretion by racing away for a smart victory.

Leung, Yip are Victorious in opener

The first race of the season is always a coveted one and it was Derek Leung Ka-chun and Dennis Yip Chor-hong who earned that honour, combining with veteran Victorious Leader in the Class Five Mount Parker Handicap (1,400m).

Leung settled the seven-year-old just worse than midfield and even though he was three-wide, he had cover, but let down strongly in the straight to beat the fast-finishing Viva Popcorn and Jolly Forever.

It was Victorious Leader’s third win at start 33 with his supporters getting their 2021-22 campaigns off to a flier as well, returning $11.

“It’s a good start to the season,” Leung said. “It’s always important, especially in Hong Kong. When you get a few winners in the first month, it’s easier to get support.”

It was the first of a double for Leung, who went on to collect the Class Four Yi Tung Shan Handicap (1,200m) with the Manfred Man Ka-leung-trained Viva Hunter.