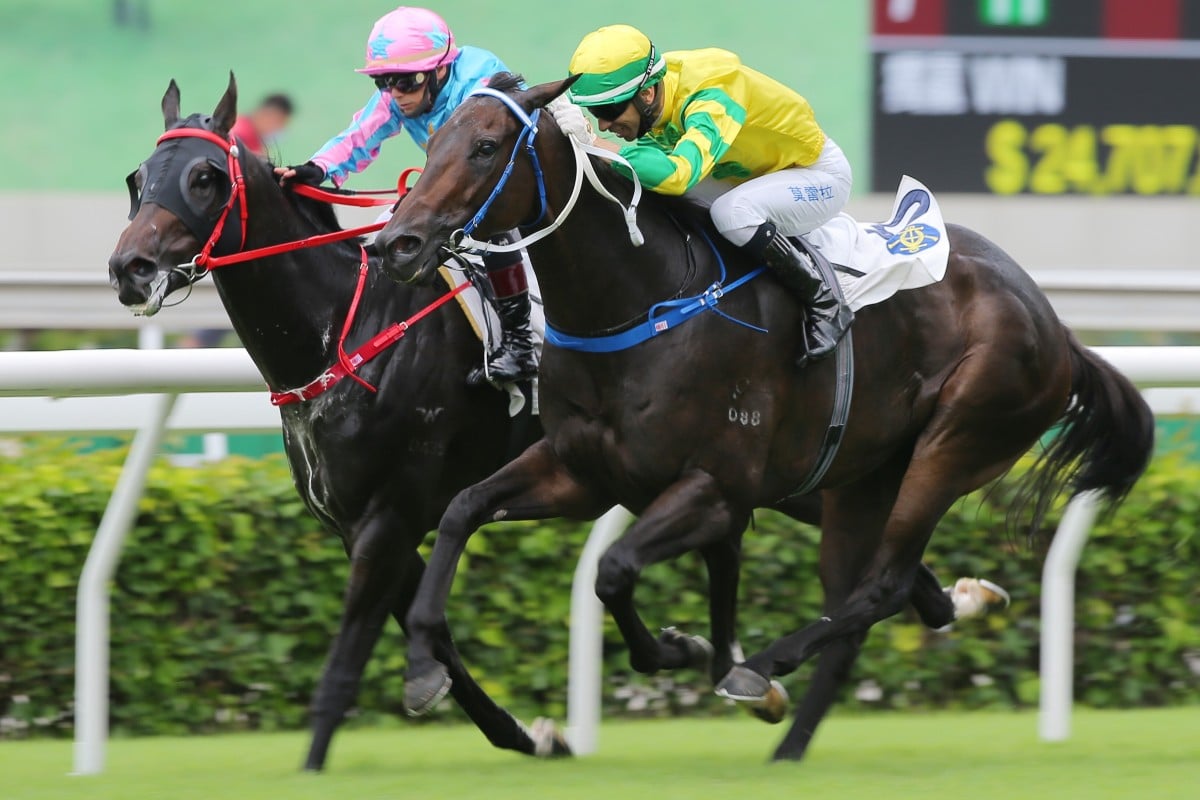 Sky Darci (outside) wins the Lion Rock Trophy in May. Photo: Kenneth Chan

Sky Darci returns to his preferred trip and is well-weighted for his first Group Two assignment at Sha Tin on Sunday and while Caspar Fownes is confident “he gets his chance to win”, both the reigning champion trainer and the star Brazilian jockey are content to play the long game.

“He doesn’t need to win, he’s not 100 per cent yet so we just need to go there and run a good race,” Moreira said before echoing what Fownes has long suggested.

“He has the potential [to be one of Hong Kong’s best] but he’s not there yet. What I can say is that he’s going to have every chance to rise.”

12 wins from 13 starts and surely Group 1s on the agenda.#HKRacing pic.twitter.com/gtIfRxa9xL

Sky Darci is being primed to peak at December’s Hong Kong International Races and will most likely get his chance to test himself against Hong Kong’s benchmark for the first time in the Group Two Jockey Club Mile next month – a contest in which Golden Sixty will be first-up.

Whether the son of Darci Brahma can mix it with the four-time Group One winner remains a big “if” but a victory on Sunday would add to the pair’s similarities – Golden Sixty is the only Derby winner to snare the Sha Tin Trophy in the same calendar year since Co-Tack in 1983.

Moreira is certainly not putting any ceiling on the heights Sky Darci could reach.

“The day Golden Sixty is gone – which is going to happen one day – Sky Darci may have the chance to be the best horse in Hong Kong. I know it’s a competitive game and it’s a big task, but why not dream?” Moreira said.

Buddies goes bang! Top ride, @mattLchadwixk rolls to the front and prevails at 23/1 in the G3 Celebration Cup. #HKracing pic.twitter.com/TcVR5Gy3E8

“He’s got age in his favour, he’s a year younger than the best horse in Hong Kong and nothing lasts forever.”

Moreira is shooting for his seventh victory in his 13th ride aboard Sky Darci – a record which includes a Lion Rock Trophy success in the gelding’s only Group outing over a mile – with the pair only missing a place twice.

Sky Darci has drawn the sticky gate 11 in the 12-horse contest and while perhaps not Moreira’s first choice, it should mean less chance of the galloper being pocketed on the rail late like he was when third in the Group Three Celebration Cup (1,400m) last month.

“Last time he was a bit unlucky. This time he should run a better race. I think the distance is going to suit him,” Moreira said.

“He showed he’s got class, good acceleration and I would be surprised if he runs a bad race,” Moreira said of C P Brave, who broke his Hong Kong maiden over a mile at start four last month.

“The step up in distance is going to suit him even better. Any extra weight on the horse’s back is a concern, but I’m confident he’s going to run a good race.”