David Hayes wants to send Lord Thunder Down Under for rehab David Hayes has lodged an application with the Jockey Club to take undefeated speedster Lord Thunder back to Australia to give the four-year-old every chance of making a full recovery from a tendon injury.

Lord Thunder saluted on debut in September for prominent owner Marc Chan and romped home by four lengths last start on October 1 before the issue was detected a fortnight ago.

Hayes is hopeful he will get the tick of approval to temporarily relocate the gelding to Lindsay Park in Victoria, where his sons Ben and JD train, and is hoping to send stablemate The Summit along for the ride.

Also owned by Chan, The Summit had three fruitless runs last season before suffering a tendon injury of his own.

“There’s a lot of good things about Hong Kong but [rehabilitating] a tendon is well off the pace and these horses are too valuable to go through the system and just breakdown again. We’ve got to try and get them running,” said Hayes.

“We’re making our decision whether we rehab The Summit or retire him to Australia to race down there – we’ll make that decision just before we leave.

“Lord Thunder will have his easy time and then he’ll do his full rehab at Lindsay Park, as long as it takes, and then he’ll probably be back racing this time next year.”

Hayes confirmed he hopes to have the gallopers on a flight soon after the Hong Kong International Races on December 12 and said the flexibility he has at Lindsay Park makes the decision a no-brainer.

“The private facilities mean you just get the absolute pristine ground whenever you want, it’s uphill gallops all the time, any day you want,” he said.

“So I just think it’s a better option. Everything you do here is very regulated, so you can do things when you want and it’s just better to do it at home.”

Jerry Chau Chun-lok continued his rapid rise at Happy Valley on Sunday, producing a peach of a ride to lift God Of Dragon to victory in the Class Three Kwangtung Cup (2,200m) – a race he had no right to win.

Douglas Whyte’s in-form stayer wouldn’t go a yard early and looked to have no chance when he was about six lengths behind the second-last horse as they entered the home straight for the first time.

But Chau didn’t panic and stuck to the rail, allowing the seven-year-old to find his rhythm and slowly tack on to the back of the field.

From there, the 21-year-old kept making ground along the fence as his rivals looked for clear running, shooting through along the inside early in the straight to beat Above by a neck.

It was the difference between winning and losing as God Of Dragon didn’t go around a runner, while Above came home the widest of them all.

Whyte was full of praise for his former apprentice, who stuck to the pre-race plan.

“That’s what you call a graduation ride, that’s how you ride Happy Valley,” Whyte said. “It looked very awkward before the race on paper because I didn’t want Jerry to get into any speed battles early – it’s just detrimental with that short run to the first corner, so I instructed him to go back and ride the rail.

“It couldn’t have worked out better. Everything started leaving the rail and before we knew it, we were kind of up to third on the rail and then hit the front just after turning for home.

“It was a ground-saving ride and it was the winning [move] in the end. You get away with a ride like that and it just shows you the difference.” There’s a Bear in there

Bear Again’s connections had to survive a few nervous moments after their galloper made a stunning return from injury with a gutsy front-running victory at Happy Valley on Sunday.

The David Ferraris-trained seven-year-old had surgery on his front fetlocks in April but showed no ill-effects of that procedure with a bold showing in the Class Three Shantou Handicap (1,650m).

Given it was his first start in six months punters thought he needed the run and sent him out a $21 shot, but with the help of a smart ride from Blake Shinn he defied expectations.

But it certainly wasn’t straightforward with Bear Again wobbling out late under pressure and interfering with Everyone’s Delight and Smoothies in the straight as he beat King’s Capital by a short-head.

Things got sticky in the finish but Bear Again holds on for the win, fighting gamely under @blake_shinn for David Ferraris! #HKracing pic.twitter.com/EVT6RyFArg

Stewards flashed the inquiry sign shortly after they crossed the line before deciding Bear Again could keep the race.

“The stewards found that while Bear Again shifted out a number of horses under pressure approaching and passing the 100m, they could not be satisfied that either Smoothies, which finished third, or Everyone’s Delight, which finished fourth, would have finished in front of Bear Again if not for the movement from that horse and therefore they did not proceed to a formal protest/objection hearing and weighed-in was declared,” the stewards’ report stated.

While the result was a positive one, the movement did cost Shinn a two-meeting suspension.

He was one of three riders to earn bans on the day with Antoine Hamelin (Baltic Whisper) and Luke Ferraris (Methane) also copping careless riding charges. 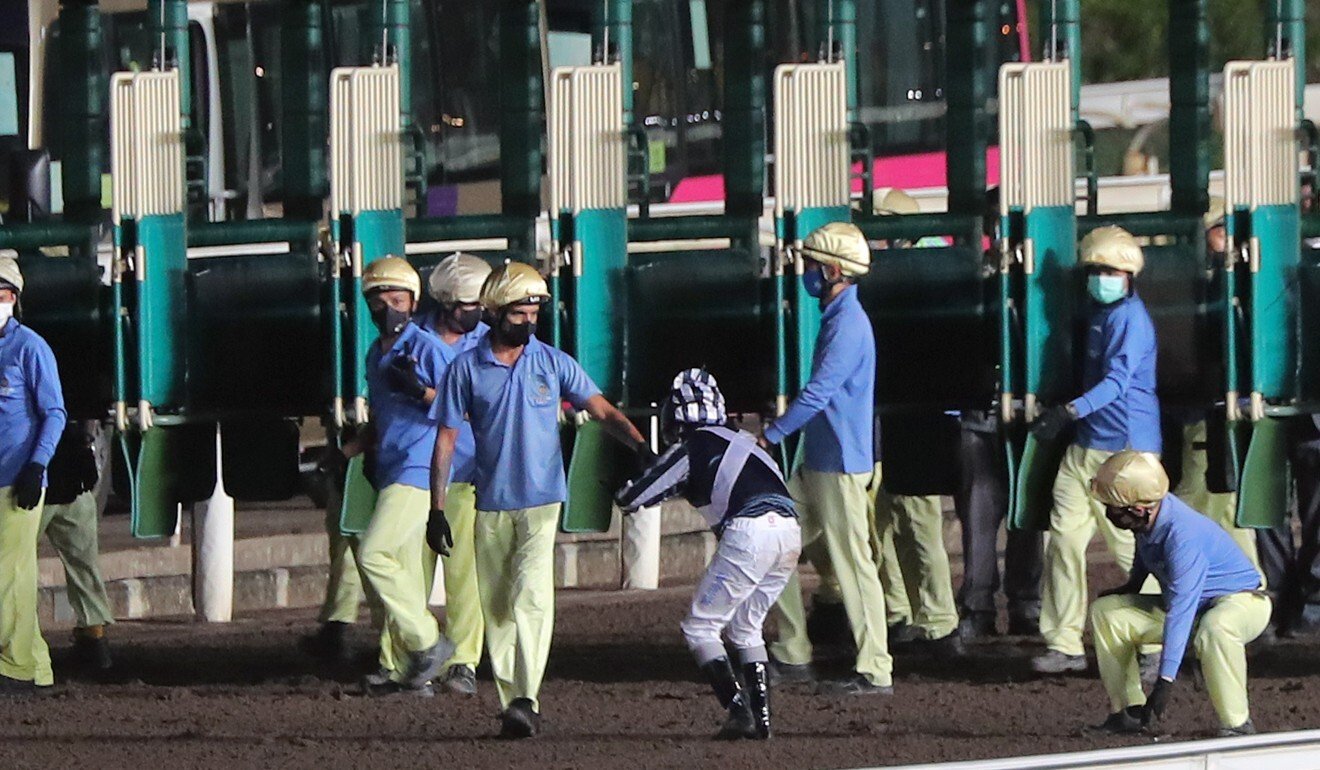 Stewards have confirmed Alex Lai Hoi-wing is hopeful of accepting rides “in the very near future” after missing Sunday’s Happy Valley meeting with concussion after hitting the dirt at Sha Tin on Wednesday.

Lai was taken to Prince of Wales Hospital after falling from Anonyma when the David Ferraris-trained galloper dipped at the start and is now resting at home after being discharged on Friday.

The 38-year-old, who has one win from 33 rides this season, is awaiting a doctor’s clearance to return to the saddle.