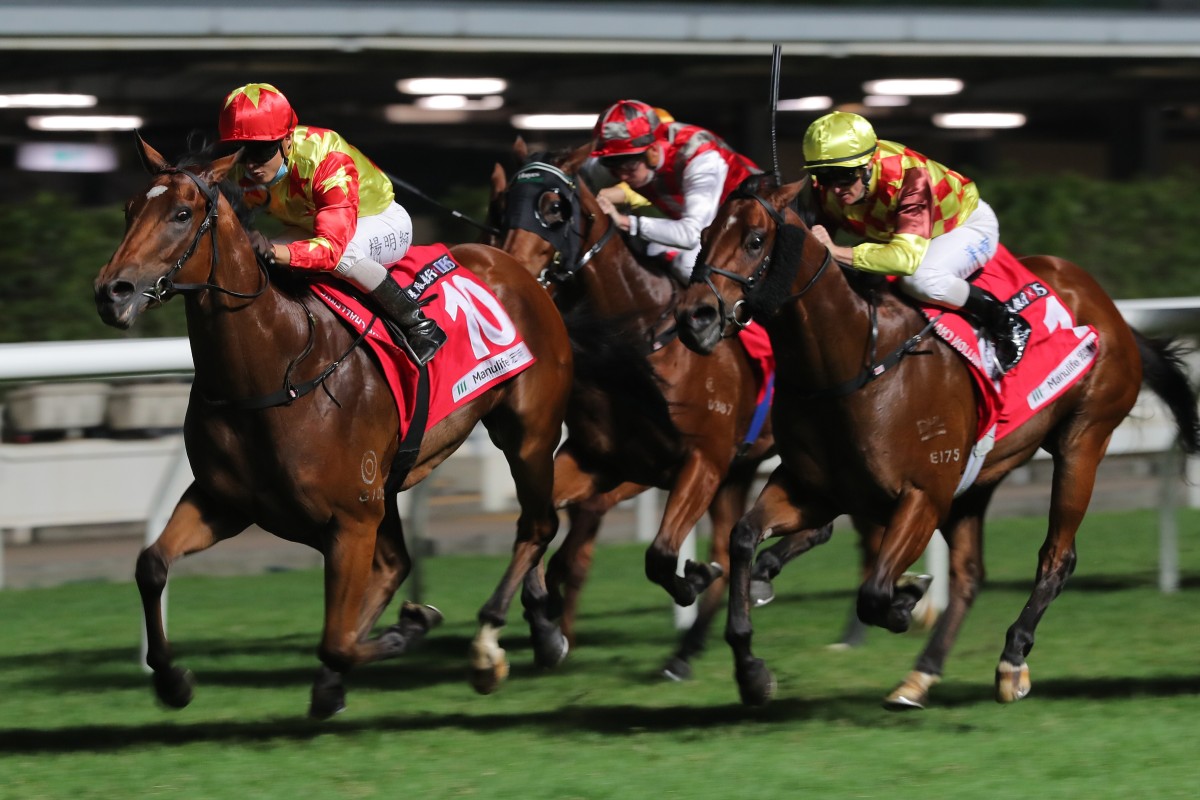 Astrologer left punters wishing they had read their horoscopes as he rocketed home to salute at the extraordinary odds of $134 in the Class Three Kokura Handicap (1,000m) at Happy Valley on Wednesday night.

In delivering Hong Kong’s biggest boilover since Amazing Star took out the Group Two Sprint Cup as a $179 chance in April, Astrologer handed trainer Douglas Whyte by far his roughest result as a trainer.

“I suppose it’s that time of the year, Christmas is coming,” Whyte said.

Astrologer, who was only promoted to the field after a scratching on Monday afternoon, settled a long last at his second Hong Kong start before jockey Keith Yeung Ming-lun wove a path through traffic in the straight and surged past stablemate and $2.90 favourite Harmony Fire in the final 50m.

“He ran with a bit of credit last week and Keith jumped off and said he gave him a good feel. He’s backed up and really hit the line strongly,” Whyte said of Astrologer, who won one race from five starts under the same name in Australia.

“Harmony Fire deserved to win tonight. Zac [Purton] gave him a perfect ride. When he headed for home it looked like he was going to win easily, but the weight difference told and played into my other horse’s hands.”

It was Yeung’s second winner in the space of five days and his fifth of the term, while Whyte moved to nine victories in 2021-22.

Like Yeung, Alfred Chan Ka-hei is keeping things ticking over nicely through the opening months of the season, with the 27-year-old also snaring his fifth winner of the campaign aboard Fast Pace in the Class Four Hanshin Handicap (1,800m).

A winner at the course and distance in September, the Caspar Fownes-trained Fast Pace finished third under Luke Ferraris over 1,650m on the all-weather track at Sha Tin on Saturday.

“He’s a tough horse and he ran very well at the weekend, being a Saturday to a Wednesday I thought this race looked quite good for him,” Fownes said.

Elsewhere on the night, Alexis Badel did his chances of earning a spot in December’s International Jockeys’ Championship (IJC) no harm with a timely double aboard Danny Shum Chap-shing’s Regency Star and the Francis Lui Kin-wai-trained Sunny Star.

While the overseas line-up for the IJC is to be announced this week and dominant duo Purton (reigning IJC champion) and Joao Moreira (reigning Hong Kong champion jockey) are assured places, two of the four Hong Kong slots are still up for grabs.

The positions are to be filled by the next-highest placed rider and the leading local jockey as of November 24, with Badel now a clear third on the premiership table behind Purton and Moreira, two wins clear of Karis Teetan.

Vincent Ho Chak-yiu maintained his ascendancy as the leading local with a fourth straight victory aboard Fa Fa, his win aboard Frankie Lor Fu-chuen’s smart four-year-old taking him to 14 winners for the term.

Matthew Chadwick is the closest pursuant after saluting aboard One Step Ahead for Michael Chang Chun-wai to remain two victories adrift of Ho.

Purton was the other jockey with a double on the night, piloting home Manfred Man Ka-leung’s Compassion Spirit and Party Warrior, who was the first leg of a double for Lui.

Another progressive four-year-old to catch the eye was Tony Cruz’s California Cible, with Moreira taking the reins for the first time and piloting the son of I Am Invincible to his first Hong Kong victory at start four in the Class Three Nakayama Handicap (1,200m).