The star Australian snares the HK$500,000 first prize without winning a race as the overseas contingent snare all four legs 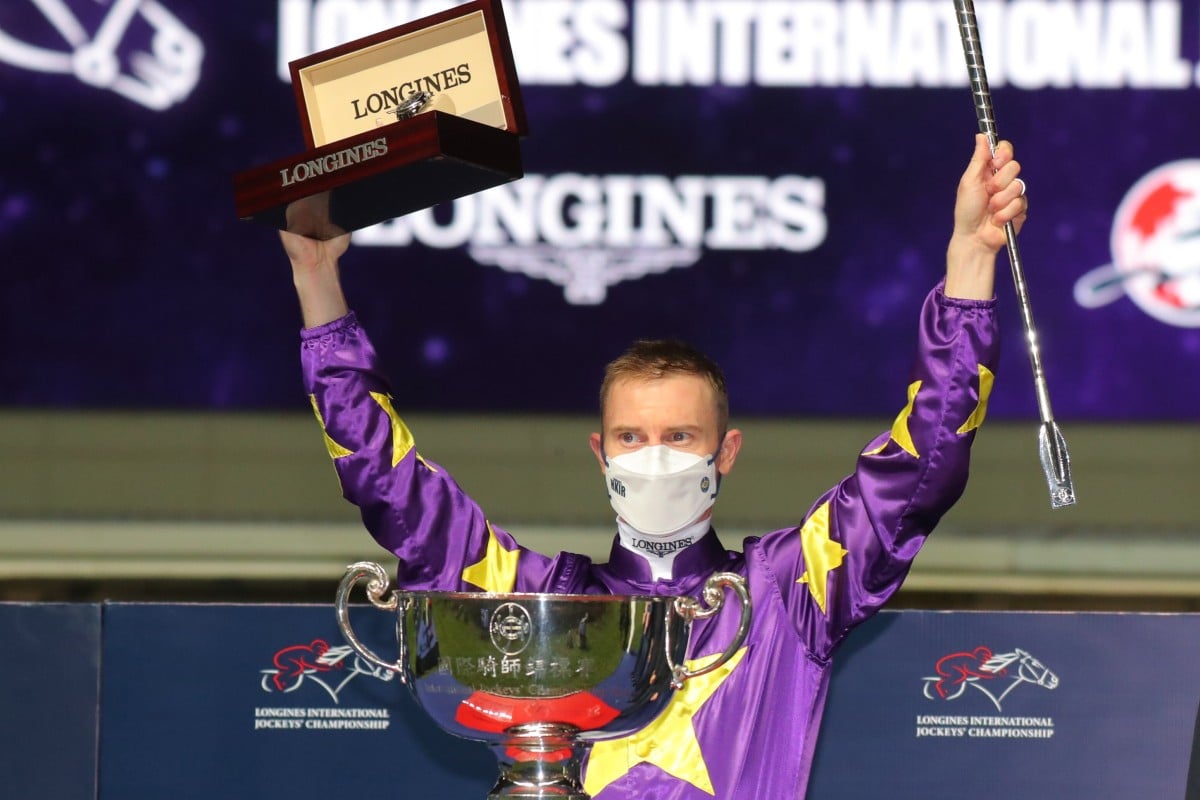 Zac Purton snared his third Longines International Jockeys’ Championship in five years without even winning a race at Happy Valley on Wednesday night, prevailing in a nail-biter as the overseas contingent swept all four legs.

Purton joined Frankie Dettori and Douglas Whyte as a three-time winner of the IJC after victories in 2017 and last year, securing the title and the HK$500,000 first prize on the back of three seconds and a third.

“It’s very satisfying. I came here a little bit worried about the quality of horses I had in the competition and I knew they were going to need things to go their way and luckily I was able to get some nice runs on them and give them their chances,” Purton said.

“When you’re on average horses, if you can just get them into the right spots and give them their chance, hopefully they are going to perform well and I was able to do that.”

“It was a bit frustrating I kept getting beaten in those photos but I suppose that makes for good racing and a good competition. The points added up,” he said.

“They way the format is now, the boys might be asking for it to change again – it’s working in my favour too well.”

12 points for @HollieDoyle1! She gets the best out of Viva Hunter in the 2nd Leg of the @LONGINES #IJC, narrowly scoring in a tight photo. #HKIR #HKracing pic.twitter.com/2wwZoW7AQg

The competition was captivating throughout, with Purton leading by four points heading into the final leg before finishing on 22 points, with international quartet Tom Marquand (Awesome Treasure), Hollie Doyle (Viva Hunter), James McDonald (Invincible Missile) and Mickael Barzalona (Elon) equal in second place on 12 points after one win each.

Doyle created her first slice of IJC history last year when she became the first woman to win a leg of the series aboard the David Hayes-trained Harmony N Blessed and she and her fiancé Marquand took it to another level this year with a victory each.

“It is just as good, if not better [than last year]. It’s good to have a crowd here, it lifts the atmosphere and I’m blessed to have had the luck I’ve had,” said Doyle, who produced a peach of a ride aboard Manfred Man Ka-leung’s Viva Hunter to salute from barrier 12.

Great ride! @mcacajamez threads through on Invincible Missile to capture the 3rd Leg of the @LONGINES #IJC. #HKIR #HKracing pic.twitter.com/Lo6ltTV5tm

“It’s very special to win against the world’s best jockeys and it’s a huge honour for Tom and I to be asked back here.”

Marquand took out the first leg of the IJC aboard the Hayes-trained Awesome Treasure, with the 23-year-old produced a strong ride to lift the $3.50 favourite over the line and continue his good relationship with the trainer.

“My first foreign forays were down in Australia for David when I’d had just under a year’s riding and I had a bit of success there. It’s absolutely great to be back riding for him here,” the jockey said.

“It was a perfect opportunity and they went hard and he was taken off his feet a bit but it worked out well. This win ranks extremely highly in my career because riding against the world’s best jockeys it’s pretty hard to top.”