The self-made millionaire succumbs to illness, with his son Kareem vowing to carry on his father’s legacy in the sport 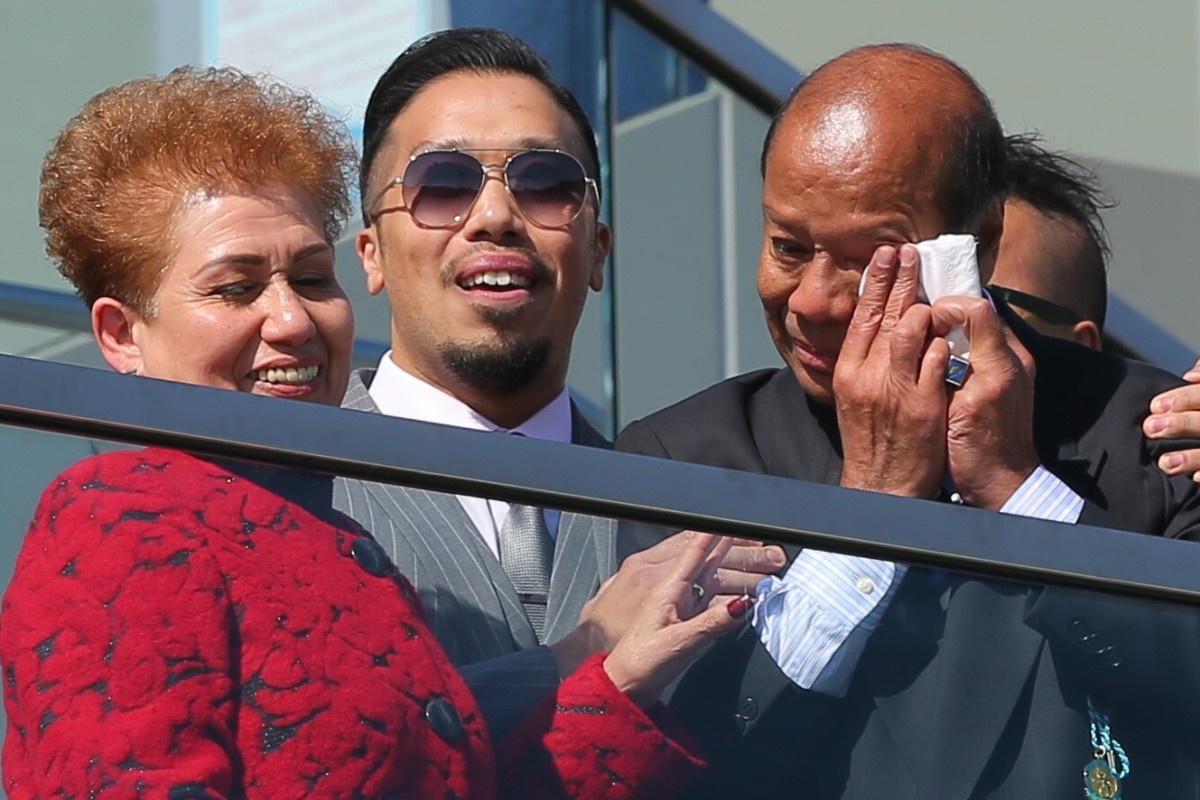 Kerm Din wipes away a tear after one of Pakistan Star’s victories. Photo: Kenneth Chan

Prominent Hong Kong owner Kerm Din has been remembered as a lovely man with a passion for racing after his death earlier this week following an illness.

A self-made millionaire who amassed his fortune in the pest control business after humble beginnings, Din is best known for his association with the enigmatic Pakistan Star.

Pakistan Star became an internet sensation with mind-boggling last-to-first performances in his first two runs before going onto win two Group Ones and also stop three times during races.

“We started out in a small one-room apartment, and now I have a penthouse. We worked hard, that’s the main thing, we kept looking forward and working hard. Just like this horse, we started slow, but we caught up, pushed and never gave up,” Din told the Post in 2016 after Pakistan Star’s second consecutive win to begin his career.

Pakistan Star, who started his career with Tony Cruz before joining Paul O’Sullivan, was one of a string of gallopers with “Pakistan” in their name – Din’s father Omar emigrated to Hong Kong from Pakistan – that carried Din’s green and white silks.

“He loved horses and racing was his favourite sport. The Pakistan series is his legacy and I will carry that on,” Din’s son Kareem said.

Ruan Maia continues to make the most of the chances he is afforded after partnering the Tony Millard-trained Ezra to victory at $21.60 in the Class Four Lukfook Jewellery Love Forever Collection Handicap (1,600m).

Maia has been one of the most profitable jockeys in Hong Kong so far this season and continues to coax better performances out of his mounts than the market expects, with Ezra’s victory following hot on the heels of his win aboard $57 chance Navas Two last weekend.

“I’m very happy. Thanks so much for Tony. The trainers are still giving me support and I still work hard,” said Maia, who also lifted Chancheng Prince home at $53 earlier in the season.

Ezra, the grey! The Oratorio gelding storms down the outer under @Ruanmaiajockey for trainer Tony Millard. #HKracing pic.twitter.com/MW3LCQ5VZ9

It was Ezra’s second win of the term and his third from 29 career starts, with a step back in trip working wonders and Maia producing the goods despite having barrier 13 to contend with.

“We’ve been running him over 2,000m and we decided to give him a change but when the draw came out I thought it was a disaster but the race worked exactly as I had planned, so we were quite lucky,” Millard said.

Things have clicked in a big way for the Ricky Yiu Poon-fai-trained Soulmate, with the five-year-old stringing together his second consecutive victory three weeks after breaking his maiden at start nine.

Sent out a $2.50 favourite in the Class Three Lukfook Jewellery F-Style Hey Cool Collection Handicap (1,600m), Soulmate went straight to the front from gate nine under Joao Moreira and got some cheap early splits in a race that was run a second outside standard overall.

“Joao knows the horse too well and he jumped too well. We expected the other horse [Super Ten] to lead but he couldn’t find him so we took a soft lead and I thought after that happened he would have a chance. There was no one putting him under any pressure and he did it very easily,” Yiu said.

“He has really picked up, he’s improved out of sight. I’m glad, especially for the owners – it’s their first horse.”

Yiu also had the runner-up in the race, with Golden Link travelling in the box seat under Matthew Poon Ming-fai and following his stablemate across the line as a $32 chance.

Yiu was pleased to land what he labelled a “rare” stable quinella and those that found it were rewarded with a dividend of $435.50.

The victory capped a double for Moreira, who looked to have a stack of chances throughout the card but didn’t fire until the end, snagging race nine with Romantic Warrior before adding the finale.

The Magic Man now trails the injured Zac Purton by five in the battle for the jockeys’ title, which the arch-rivals have each won four times.

Ho Happy, O’Sullivan over the Moon

A couple of trainers at the foot of the table kept things ticking over with victories at Sha Tin on Saturday.

Happy Daily broke his maiden at start seven, letting down nicely from midfield under Karis Teetan to post a neck victory over Benno Yung Tin-pang’s debutant Leather Vanguard with Keith Yeung Ming-lun in the saddle, while the John Size-trained Running Glory ran third under Joao Moreira.

“In the past few runs, he’s had no luck with wide draws. Fortunately, today he got a good draw and was able to sit and sprint but I still worried in the straight because Joao [Moreira] accidentally hit my horse twice with the whip,” Ho said.

“The horse was panicked because he knows nothing about this. I’m happy because Karis did a good job.”

Yung also posted a winner on the afternoon, with Incredible a convincing winner under Yeung in the Class Five Lukfook Jewellery Wedding Collection Handicap (1,600m), the six-year-old’s second victory from his past three starts.