The 27-year-old pilots Team Spirit and Super Kin to victory on Sunday, giving him nine winners for the season to eclipse his effort from 2020-21 with more than half the campaign remaining 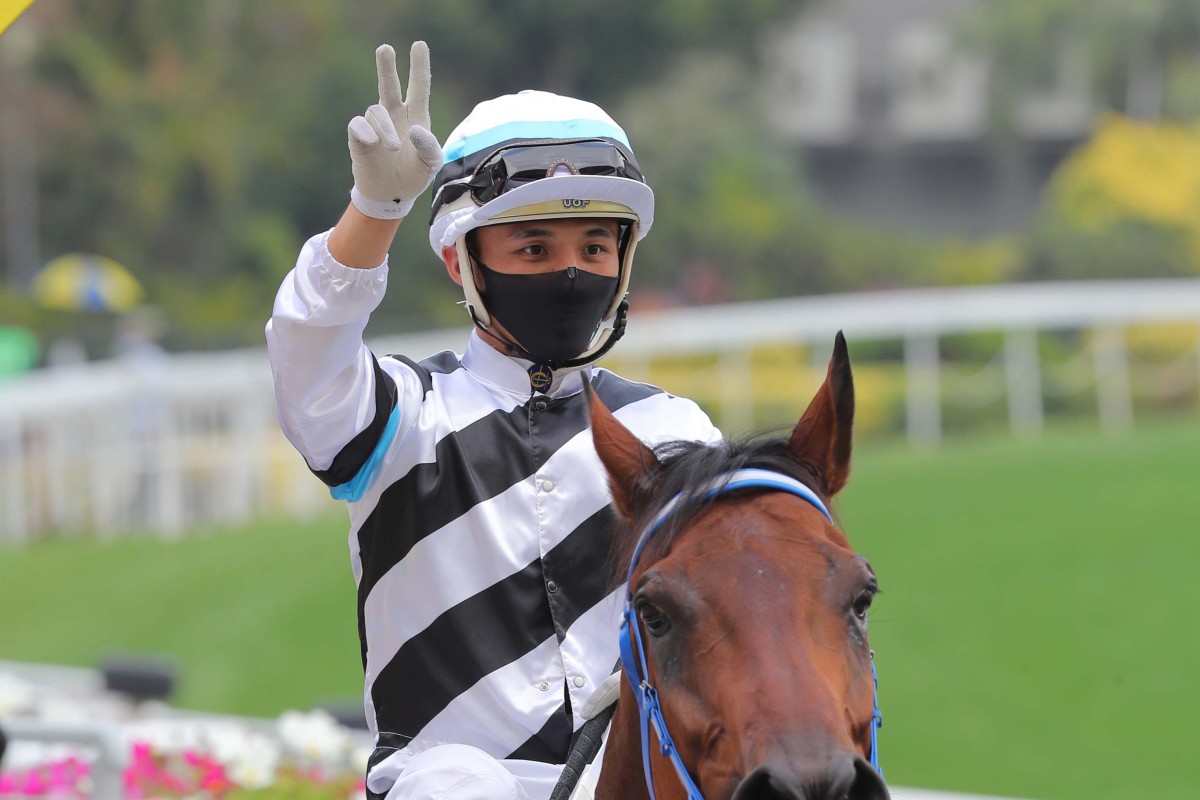 The evolution of Alfred Chan Ka-hei continues as the local rider ticked off a couple of important milestones with a double at Sha Tin on Sunday.

The 27-year-old’s victories aboard Team Spirit and Super Kin were the first with his lighter claim – recently reduced from seven pounds to five – while they also ensured his season tally of nine has already eclipsed his total of seven winners from 2020-21 with more than half the campaign remaining.

It’s been a slow burn for Chan, who now has 47 winners since joining the Hong Kong ranks as an apprentice in March 2019, but he continues to maximise his opportunities and is growing in confidence.

“It’s very satisfying,” said Chan, who last posted a brace at Sha Tin on 12 September. “I can’t ask for more. It was nice to have eight rides today.

“I expected them to run good – they both came third last start – but I got some luck and they both won.

“I was able to sit outside the leader in both races and the leader was ridden by Karis [Teetan] each time. There was good speed and the horses performed well. It’s great to ride a double and get support from Chris [So Wai-yin] and Caspar [Fownes].”

The So-prepared veteran Team Spirit secured his first win in over a year by taking out the Class Three Luk Wu Handicap (1,200m).

After beginning well, Chan elected to sit outside first-starter California Sky in transit before holding off the challenge of Gallant Express, who was trapped three-wide with no cover throughout, in the run to the line.

It was a result that pleased So, who gave plenty of credit to the rider after following instructions to the letter.

“We’ve been waiting for a long time. He’s very consistent, this horse,” the trainer said.

“In Class Three, he is competitive. He’s a healthy, honest horse and he has only one style – in front. And that’s why it suits to have a kid on. He did a good job today.

“I told him that he didn’t have to go to lead. We predicted [California Sky] should be in front, so I told him to just park outside him and save energy and hit the line the last 300m. He did a perfect job, followed instructions perfectly.

He's a tough animal, Team Spirit! 💪 The seven-year-old fights gamely to get his sixth career-win in Hong Kong, this time under @alfie_ck94. #HKracing pic.twitter.com/Mt6aR6FxeK

“You have to put the kids on this horse, claim a couple of points. We tried Class Two but he could not win. That’s just the system. He came back to Class Three and I told the owners he would be competitive.”

It was almost a carbon copy aboard Fownes’ Super Kin in the Class Five Wong Yi Chau Handicap (1,400m), Chan pushing forward from barrier 12 and sitting off Divine Era before going for home and defying the fast-finishing Dragon Pride.