Ricky Yiu admits he couldn’t wait for the Magic Man’s return to run the victorious Cheery, one of a handful of successes the jockey would likely have ridden on Sunday 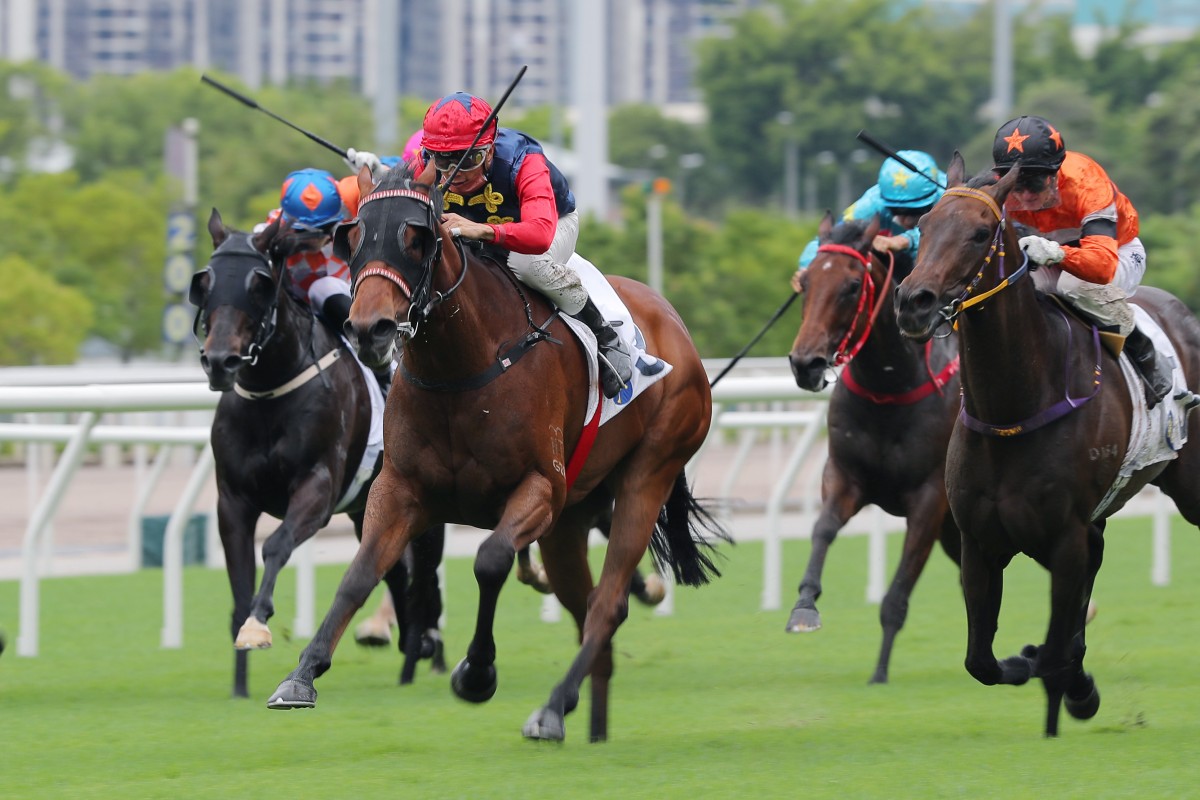 He admitted to being frustrated after receiving a suspension for careless riding last weekend and Joao Moreira would have felt sick as a string of gallopers he should have been riding saluted at Sha Tin on Sunday.

Paul O’Sullivan said in the build-up to the meeting that Moreira “was very keen to ride” Wisdom Patch again and that galloper duly saluted under Matthew Chadwick in the Class Four Essex Handicap (1,200m) on the all-weather track.

Moreira was also aboard Mission Smart for his last run – a close second – and Frankie Lor Fu-chuen’s galloper went one better with Blake Shinn aboard in the Class Five Suffolk Handicap (1,400m), while the Brazilian also missed out on the victory of Cheery.

Moreira had ridden the Ricky Yiu Poon-fai-trained Cheery at his past two starts and was eager to stick with the three-year-old, who took out the Class Four Norfolk Handicap (1,600m) under Derek Leung Ka-chun.

Too good, Cheery! Ricky Yiu is on the board at Sha Tin thanks to a sweet ride from Derek Leung. #HKracing pic.twitter.com/McQhoHiuGG

“Joao wanted to ride him but I had to run him, I would have had to wait another three of four weeks for another suitable race for him,” Yiu said after the victory. “Derek has been winning for me lately and it was a good chance to put him on.”

Yiu was thrilled to see a couple of changes he made pay off with Cheery, who broke his maiden at start four.

“It was the right thing to put the blinkers on for the first time and step him up over the mile. He jumped better and he travelled better, he looked comfortable all the way,” Yiu said.

“He’s only three and it’s just his fourth start so I reckon he’s got a bit of a future. He’s quite a genuine type.”

Moreira was also aboard The Rock, who won the Class Two Alnwick Handicap (1,200m), at his last start but would have been aboard Running Glory in that contest, while John Size finished the card with a treble and there’s every chance the Brazilian would have been involved in some of that success had he been riding.

On a positive note for Moreira, he still holds a four-win lead in the race for the jockeys’ title after his arch rival Zac Purton could only manage the one winner on Sunday afternoon, a success aboard the Size-trained Toronado Phantom.

Chadwick might have been the beneficiary of Moreira’s absence with Wisdom Patch but he also faces a stint on the sidelines after receiving a two-meeting suspension and copping a HK$60,000 fine for careless riding aboard the six-year-old.

Chadwick, who will ride the Caspar Fownes-trained Columbus County in next Sunday’s Group One Champions & Chater Cup (2,400m), will miss the meetings on June 1 and 5.

Wisdom Patch’s victory was his first in Hong Kong at his 17th start and it continued the improved recent form of trainer Paul O’Sullivan, who now has seven winners since the start of April after managing only 10 in the seven months beforehand.

O’Sullivan’s day could have been even better as he had to endure two runner-up finishes on the back half of the card, with both August Moon and Reve Parisien falling just short in their quest to land back-to-back victories.

Maia fires down an Ace

In-form trainer Douglas Whyte is a good man to impress at the moment and Ruan Maia may well have laid the foundation for future success with his effort aboard Ace One, saluting with his very first ride for the legendary South African.

Lyle Hewitson has done most of the damage for Whyte in a run that has seen the trainer land nine winners from the past seven meetings but Maia got in on the act with a confident ride aboard Ace One, travelling one back on the rail before spearing the four-year-old down the middle of the track in the home straight.

It was Maia’s 22nd victory for the campaign and the Brazilian sits just outside the top 10 on the jockeys’ table in his first full season in Hong Kong.

Ace One broke his Hong Kong maiden in start five, with the gelding dropping into Class Four for the first time after beginning his Hong Kong career on a rating of 65 after winning three races from five starts in Australia pre-import.

The son of Shamus Award’s victory as the $4.4 favourite completed a double for Whyte, who also took out the opening race on the programme with Universal Crown.

Ridden by Hewitson, Universal Crown was sent out at a $6.55 chance for the Class Five Somerset Handicap (1,200m) and didn’t disappoint his supporters, banking his second win at start 20.

Whyte now has 35 victories for the season, leaving the 13-time champion jockey with a chance to go past his totals of 44 and 41 in his first two training campaigns.