Chris So’s Sunny sings in the rain after debut debacle, while Me Tsui takes aim at benchmark 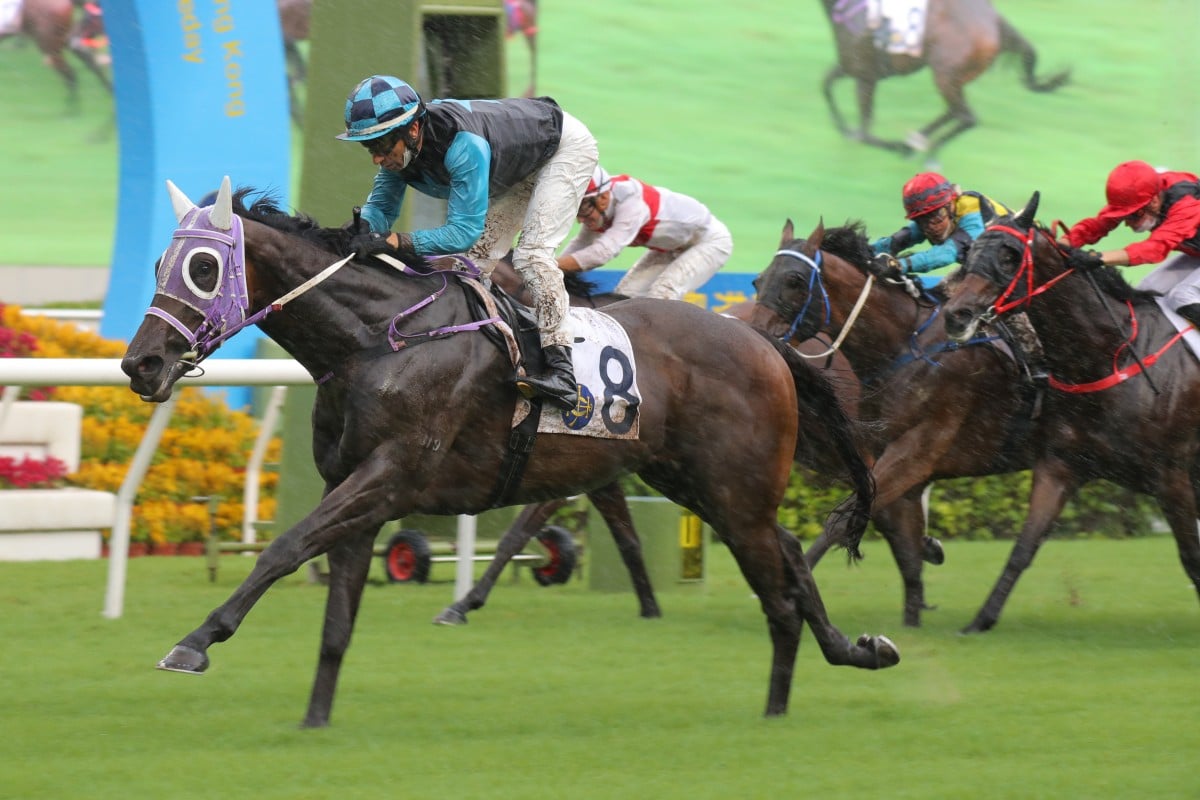 Super Sunny Sing’s debut flop raised questions for a number of reasons but no one was left wondering on Friday, with the Chris So Wai-yin-trained three-year-old storming to a two-and-a-half-length victory at start two.

Sent off a $2.3 chance under Joao Moreira on debut in May, Super Sunny Sing finished well off the pace in 11th after a torrid lead-up to his maiden outing.

Following that race, the stewards’ report confirmed Super Sunny Sing “reared abruptly and struck its head on the overhead bar [and] then continued to be very fractious and momentarily got down behind, resulting in its rider, Joao Moreira, being dislodged”.

Queries were raised about whether Super Sunny Sing should have been allowed to start in that race and the galloper’s performance on Friday confirmed that he was far from his best on debut.

Boom! Just like that... Joao Moreira's on the board.

Those who piled into the $2.3 last time and stuck with Super Sunny Sing won’t be complaining too much now, however, with the son of Nicconi starting at $8.90 for his second appearance – despite Moreira still being aboard – after creating plenty of interest in betting late.

Settled in the back half of the field from gate 10, Super Sunny Sing had plenty to do turning for home but strode out nicely in the final 400m to prove far too strong for his rivals.

“We weren’t sure about the conditions today but we think he is a good horse,” So said after his charge’s win on a good to yielding track that got much heavier as the afternoon progressed.

“We used a hood on him today to keep him quiet and he had a great ride from Joao and you saw the result.” Super Sunny Sing provided Moreira with his only victory of the day but it was enough for the Magic Man to close Zac Purton’s lead in the jockeys’ championship to just one with four meetings remaining, the Australia heading home with four placings but no winners.

Tsui doubles up as Chang charges on

Trainer Me Tsui Yu-sak claims he is not “worrying about the numbers” as he pushes to avoid his first strike but if he were to take a peek after his double at Sha Tin on Friday, he’d find a set of figures that are certainly looking a lot better than they were a month ago.

Trainers with a Conghua base need 18 victories to avoid a strike for failing to meet the Jockey Club’s performance benchmark but a new rule implemented at the start of this season means only two of those can come in Class Five, a condition that could ultimately trip Tsui up.

Sparkling Dolphin edges Forte in a thriller for Dylan Mo and Me Tsui! #HKracing pic.twitter.com/78ZwmvojJ2

The veteran only had 14 winners to the end of May and five had come in the cellar grade, leaving him chasing seven victories in Class Four or above to satisfy the powers that be.

He has banged in five of those at the past six meetings and now needs just two winners that meet the criteria from the final four meetings.

“I don’t want to look at the numbers or else I will confuse myself. I want to focus on training winners and not worrying about the numbers,” Tsui said after the victories of Sparkling Dolphin and Royal Agility.

Sparkling Dolphin sprang back into form in the Class Four Continuous Development Handicap (1,000m), recording his second victory of the season following a spell.

Great ride, @LyleHewitson! The South African surges wide aboard Royal Agility who romps in for a Me Tsui double. @SAJockeyAcademy #HKracing pic.twitter.com/hWDor9mrUe

After going down by a combined 45 lengths across three starts following a victory in November, Tsui sent the five-year-old to Conghua and he returned a different animal, setting the pace throughout under Dylan Mo Hin-tung to grab victory as an $18 chance.

Royal Agility was the beneficiary of a masterful Lyle Hewitson steer, the South African utilising the better ground near the outside rail to orchestrate a commanding victory.

After travelling three wide just forward of midfield aboard the six-year-old on a rare yielding-to-soft surface, Hewitson swung his mount out towards the middle of the track upon straightening and by the time Royal Agility crossed the line four and three-quarter lengths in front, he wasn’t far from the outside rail.

After taking 19 starts to break his Hong Kong maiden – a period during which his rating halved from 80 to 40 – Royal Agility has now won two of his past three.

Double up! @mattLchadwixk collects his second win of the afternoon aboard Sea Monarch. ✌️ #HKracing pic.twitter.com/6EBpfeNiwA

Another trainer hitting the line strongly after a slow season is Michael Chang Chun-wai, who took out the Class Five Serving The Community Handicap (1,400m) with Sea Monarch.

The limitations on Class Five winners means Chang needs a miracle to avoid a second consecutive strike but after a big few weeks he now has 15 winners for the season, half a dozen more than he managed last campaign.

Emphasising Chang’s form is the fact the 60-year-old has had four winners and four placings from his past 11 runners.