Kiwi trainer snaps run of outs thanks to the victories of Tronic Mighty and Rattan Kingdom Meanwhile, Matthew Chadwick takes the riding honours with a treble at Happy Valley on Wednesday night 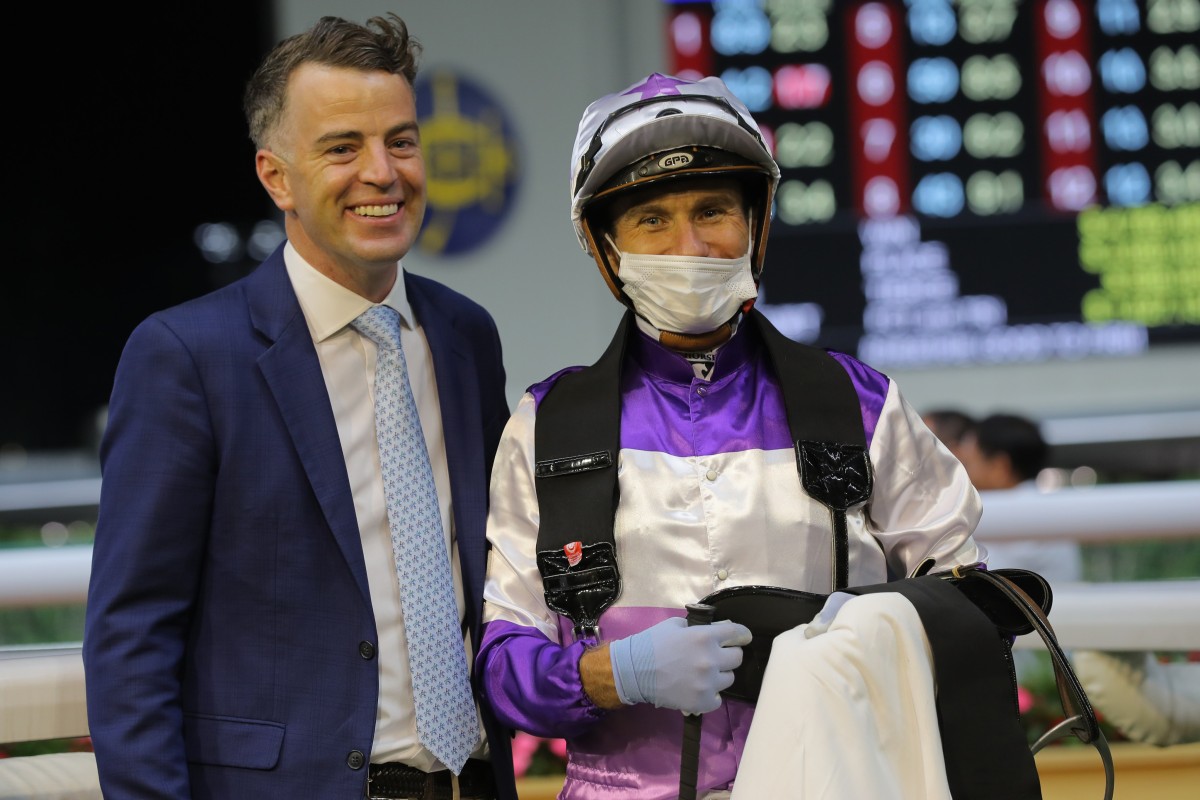 He has been hanging for a change of luck and in the end all it took was the presence of a few familiar faces for Jamie Richards to shed his nagging drought at Happy Valley on Wednesday night.

With parents Leanne and Paul, sister Libby and her partner Cameron on track, Richards landed his first Hong Kong double thanks to the wins of Tronic Mighty and Rattan Kingdom, snapping a run of outs dating back to October 12 and spanning 44 runners.

“It’s great to have the family here, and I’m thrilled to get a double while they’re here. They might have to stay a bit longer – they’ve brought the change of luck,” said a beaming Richards.

After a patient start to life in Hong Kong – he didn’t have a runner until the eighth meeting of the season – Richards had a winner with just his seventh runner before things ran dry.

Now though, after moving to three winners and dragging himself off the bottom of the premiership table, Richards is hopeful he “can start to build a little bit of momentum”.

“The team have been working hard, putting in plenty of hours at the stables, so I’m thrilled for everybody concerned,” he said.

“I fully respect how difficult it is to win a race here in Hong Kong. We haven’t had a lot of runners yet, and we lack a little bit of quality in the stable, but we’ve got a stable full of young horses who’ll start to come out after Christmas.”

After Tronic Mighty got things moving for Richards in the opening event, Rattan Kingdom broke through under Luke Currie in the Class Four Ibrox Handicap (1,200m) after a couple of near misses.

First double in Hong Kong, made all the more sweeter with a visit from family. ❤️ @JamieRichards3 #HappyWednesday | #HKracing pic.twitter.com/QXolDBI7tZ

“It’s great to get a win with Rattan Kingdom. Obviously, he’s been a bit unlucky. He’s drawn a couple of bad barriers,” Richards said.

“He’s been consistent throughout the early part of the season. Today, he drew a gate and he was able to get the job done for us. Luke gave him a lovely ride – very pleased with the way Luke rode him.”

Rattan Kingdom’s victory was perhaps more important for Currie than Richards, with the Australian jockey without a winner for 65 rides before saluting on the $2.55 favourite.

“By my own admission, I haven’t been riding great – some of the chances I had, I’ve been trying to do different things, and sometimes it’s better to stick to what you know,” Currie said.

“It’s been a tough little bit, but hopefully this can help turn it. Here, you need to adapt to the style a bit, but I’ve been probably trying a little bit too hard.”

Currie only had the ride because Zac Purton was stood down on Wednesday after testing positive to Covid-19 for the second time in a couple of weeks, with the Australian joining Antoine Hamelin, Jye McNeil and Ruan Maia on the sidelines after that trio failed Covid tests on Tuesday.

Of the jockeys who did make it to the races, it was Matthew Chadwick who made the night his own with a treble.

That man again, @mattLchadwixk! The 32-year-old collects a treble at the Valley as Rewarding Together sets a new 1200m course record (1m 08.26s)... 🤯#HappyWednesday | #HKracing pic.twitter.com/o6asTEbu4F

The reigning Tony Cruz Award winner as Hong Kong’s leading local jockey saluted with Bright Kid, California Deeply and Rewarding Together, the latter of whom stopped the clock at 1:08.26 to shave two-tenths of a second off the 1,200m track record.

Meanwhile, next weekend’s Group One Hong Kong Mile is down to 10 runners after Saffron Beach and Turin Redsun were withdrawn on Wednesday.

Saffron Beach will bypass the contest in favour of a preparation aimed at February’s mega-rich Saudi Cup after she changed hands at Tuesday’s Tattersalls December Mares Sale, while Douglas Whyte has opted against testing Turin Redsun at Group One level for the first time.