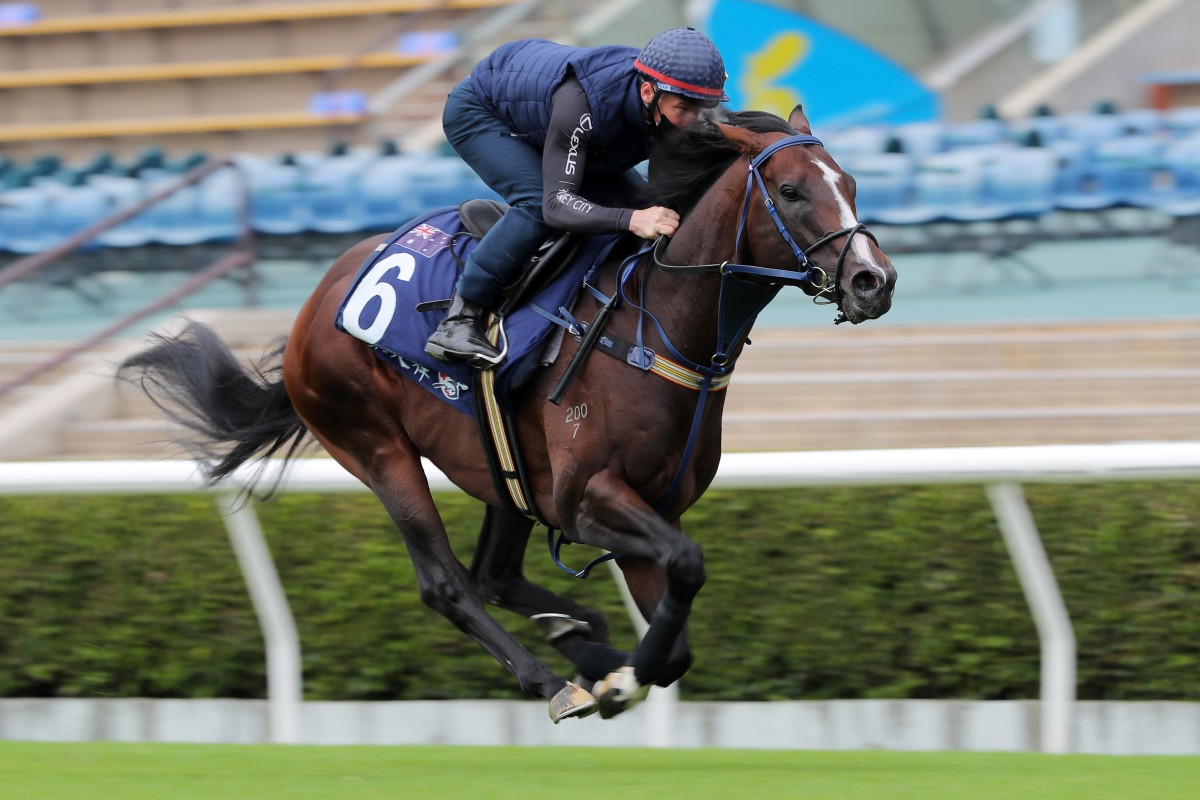 On Sunday, Neasham will delegate riding duties to the world’s best jockey, James McDonald, and he will partner majority Hong Kong-owned galloper Laws Of Indices for one mile over about 94 seconds as this international human and horse collective tries to gatecrash local hero Golden Sixty’s party.

Born and bred in the United Kingdom, where she honed her equestrian skills through eventing, hunting and show jumping, Neasham went to Australia on a working holiday in 2016 and never left the sunburnt country.

Neasham spent six months working for Gai Waterhouse, the matriarch of Australia’s most famous racing and wagering family. Waterhouse’s 152 Group One victories Down Under rank her behind only the late joint ladder leaders, Bart Cummings and her father, Tommy Smith, both of whom celebrated 246 elite-level home wins.

After half a year in Sydney learning from Gai – whose celebrity in Australia is such she is a mononymous person – Neasham relocated to Melbourne, where she continued her education at Ciaron Maher’s yard.

When Maher, who would have ridden alongside Neasham in the Mongol Derby if he had not snapped his leg in a fall from three-time Group One heroine Jameka, established his satellite stable in Sydney, he entrusted her with his New South Wales venture.

Neasham went out on her own at the beginning of the 2020-21 season, securing 36 boxes at Warwick Farm in Sydney. Her first runner, Commanding Missile – who now races at Happy Valley and Sha Tin under Jamie Richards’ name – carried the colours of Hong Kong billionaire Tony Fung Wing-cheung’s Aquis Farm to his Scone success on August 25. Two years on, her first Hong Kong International Races runner, Laws Of Indices, also counts Aquis Farm among his owners.

Laws Of Indices has come a long way – both literally and metaphorically – since Dermot Farrington – one of the horse’s original connections, who retained a share when, in 2021, Aquis Farm bought into the HK$8 million earner – paid €8,000 (HK$65,000) to purchase him at the 2019 Goffs Autumn Yearling Sale in Ireland.

A two-time juvenile winner in the Emerald Isle, Laws Of Indices won the Group One Prix Jean Prat (1,400m) at Deauville during his three-year-old campaign with Ken Condon before Aquis Farm acquired 50 per cent of the stallion and transferred him to Neasham with the aim of winning rich races on this side of the globe.

“He’s been so straightforward to train all along really. He’s an easy horse to read in that he’s always happy and enthusiastic. He’s very rarely ran a bad race. He’s been a bit unlucky,” Neasham said.

“We’ve been frustrated not to win with him – he’s been placed in two Group Ones in Australia – and this isn’t going to be an easy race to win, either.

That man @kencondonracing in another French Group 1! Laws Of Indices sees off Thunder Moon in the Haras d'Etreham Prix Jean Prat! pic.twitter.com/QZseoseYpx

“His last gallop was on Tuesday morning, so we haven’t done any fast work with him since then. James was really happy with his gallop. He said he blew off very quickly in the wind, so we’ve just kept him quietish for the rest of the week.

“Barrier 10 of 10 – we’re used to that with him. We’ve got James on board. We’ll leave it to him to negotiate that gate. He knows him pretty well. He obviously knows this track now – he’s been riding here regularly – and the horse is in great shape. We know Golden Sixty is going to be mightily hard to beat, but we’re looking forward to taking him on.”

Laws Of Indices has not won a race on a track rated firmer than yielding, but Neasham believes he is not a galloper who requires a rain-affected surface.

“We know his Group One win came on a soft track, but we think he’s better on top of the ground, certainly from what we’ve seen in Australia,” Neasham said.

HKIR: Watch the last start of every HK Mile runner, including Laws Of Indices

“Rosehill was very, very firm when he was an unlucky two-length fifth in last year’s Golden Eagle. He’s pretty versatile in that sense. He’s a sound horse, and the ground – whatever it is – won’t worry us.

“He’s got a great bunch of owners. When he got the invitation to come, they were all game. He’s raced all over the world, so why not try Hong Kong?

“Everybody raves about this weekend and how fun it is. It’s a privilege to have a horse good enough to come here and race. It was a no-brainer, really.”